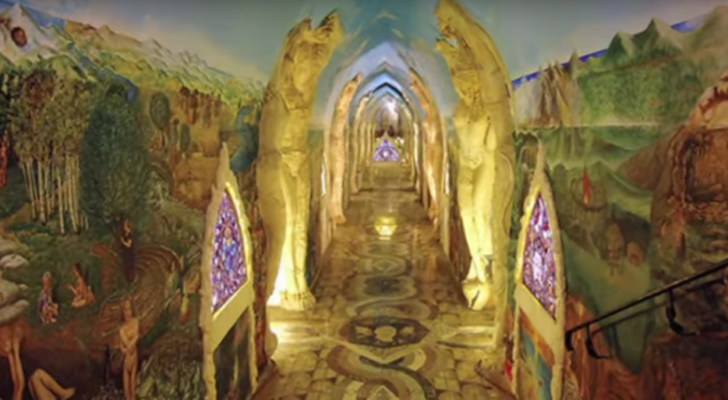 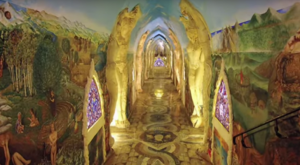 Damanhur is a commune, ecovillage, and spiritual community that was founded in 1975 by a man named Falco Tarassaco. It is situated in the Piedmont region of northern Italy about 30 miles north of the city of Turin, in the foothills of the Alps.

It is best known for its otherworldly underground tunnels that feature a cathedral dedicated to awakening the divine spark present in every human being, known as the Temples of Humankind. Called the “Eighth Wonder of the World,” what makes these temples so extraordinary is that they were dug (almost) entirely by hand into the heart of the mountain in which they reside.

“Damanhur is a resilient Federation with its own Constitution, culture, art, music, currency, schools and uses of science and technology. Its citizens are open to sharing their knowledge and research with other groups and cultures of the world, with anyone who is interested in exploring these themes. Damanhur holds events at numerous centers, organizations and points of outreach in many cities around the world, and also hosts thousands of visitors each year who participate in tours, seminars, retreats and courses through Damanhur University. The community has attracted interest from scholars, educators and researchers in the fields of art, social sciences, spirituality, medicine and alternative health, economics and environmental sustainability.

…what sets Damanhur apart from other intentional communities is that it actively utilizes the practical application of science, research and a spiritual philosophy in harmony with the planet. And yet, there is one more phenomenon that makes Damanhur truly unique: It’s an axis point where four of the 18 worldwide synchronic lines intersect. The very ground breathes. Rocks, trees and plants resonate prana. Everything seems to be subtly energized. The effect, when you visit here, is an unmistakable lifting of the human spirit.

To walk in Damanhur is to walk through past, present and future. Ancient mysteries and the forgotten wisdom of great civilizations coalesce with a fresh, tech-infused vision of an evolving potential future.”

Kept secret for years, at one point the Italian government threatened to destroy the temples unless they were opened for them to see. After community protest, the government relented, and in fact went on to encourage expansion and further development.

Watch the video below to take a peek inside the temples and to learn more about this incredible work of art.