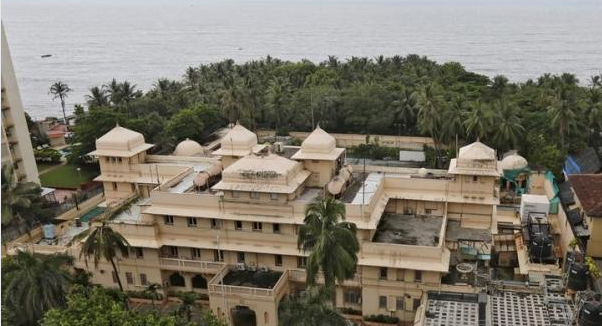 Vaccines are profitable. And it doesn’t take a whole lot of critical thinking to determine how profitable once you see how one vaccine billionaire is now living in India. The above pictured seaside mansion was purchased by Cyrus Poonawalla for a cool $113 billion. The vaccine billionaire bought a former US consulate from the US, but he will use it to continue leading his luxurious lifestyle as a residential home. It is the most expensive residential home purchase in the history of India and it should come as no surprise that a vaccine pusher was able to make the purchase. The home had been on the market for four years prior to his purchase date on September 14th, 2015.

According to Reuters India, Poonawalla is literally loaded with riches.

Poonawalla, one of India’s richest men, told the Times of India newspaper that he secured the property after real estate groups were told there were limits on potential redevelopment plans for the heritage-listed house and seaside plot.

“We thought it was a good price given the location,” son Adar Poonawalla, who ran negotiations, told the Hindustan Times.

Vaccine makers act with impunity, as reckless as they so enjoy, with the full support of almost every government in the world. It isn’t difficult to see how that could result in ridiculous unfathomable wealth. When you look at the picture of the luxurious castle just beyond the sea, remember how that lifestyle was achieved. Pharmaceutical companies are raking it in on egregious levels these days.  According to Forbes May 2015 rankings, Poonawalla is a different beast altogether, individually creating a worth of roughly $7.9 billion. That would make him the 208th richest person in the world. Vaccines are a great vertical to say the least. His company, Serum Institute of India, is the largest pediatric vaccine supplier in India. The company is currently developing intra-nasal swine flu vaccines, which if all goes well, should allow him to furnish his house with a couple 1000 couches or so. And that’s good because we’d all hate to consider that huge house sans several 100 Ikea couches.

The home is 50,000 square feet. The home sits beyond Mumbai’s sprawling ghettos and poverty and famine. It’s a protected lair of comfort and exotic being.

When you have billions of dollars, developing more and more vaccines and supporting more and more mandatory vaccination programs is a no-brainer. The revenue is driving the product without any consideration for the health fallout. Vaccines as a product act under the guise of philanthropy, unmotivated by riches and spoils. However, Poonawalla’s gigantic mega-mansion sure challenges that ideal, doesn’t it? Philanthropy, however, plays only to the audience who wants so badly to see it. Because no human needs such amenities or spoils. The amount used on the purchase of this home could help sanitation in a poverty stricken city living in dire inequality. Does this man’s philanthropy simply stop and providing vaccinations to Indian people and end when all the riches are wired into his bank account? Conceptually, this makes very little sense and simmers more in a pot of hypocrisy. You may call it a business, but you may not call it philanthropy, because that’s an insult to the vast many people who do actually help the world. It isn’t applied to those who seek shelter in the clouds above it’s turmoil.