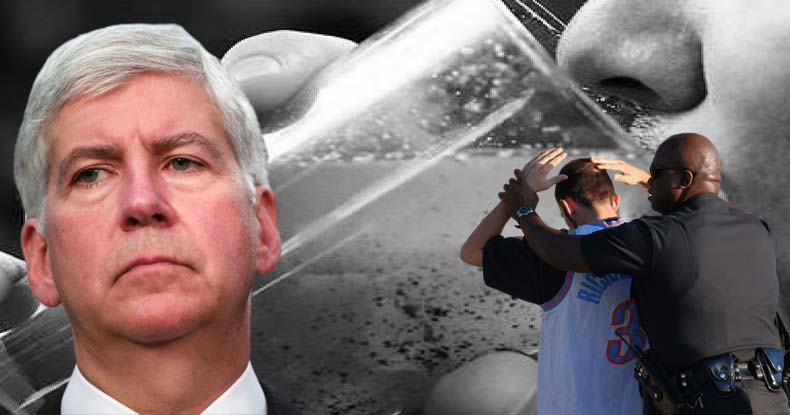 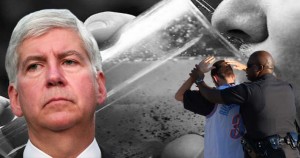 Michigan residents can rest assured because, despite the massive lead contamination of Flint’s entire public water supply, the State has its priorities on point as the government continues doggedly pursuing criminals of the highest order.

No, not Governor Rick Snyder, of course — nor anyone else potentially responsible for poisoning an entire city’s population with lead — We’re talking about those awful medical cannabis users and pesky recreational pot smokers.

In fact, while well over half of Michigan residents support ending cannabis prohibition, before public education campaigns about potential tax benefits have even kicked off, including 74% of those under 30 years of age and a surprising 51% of those over 60, according to the Detroit News. But arrests for its possession and use are skyrocketing — up 17% between 2008 and 2014, according to state police data, reported MLive.

Even more astonishingly, this increase in pot arrests occurred at the same time total arrests for all crime fell 15%. Two-thirds of all drug arrests were related to weed in 2014 — of which 86%, or 20,483, were for use or simple possession of the plant.

Such targeting of medical and recreational users by police — Michigan law strictly regulates weed for those with “debilitating medical conditions,” only — has led to a number of outrageous cases in recent times.

A state appeals court recently upheld the conviction of 47-year-old medical cannabis caregiver, Alenna Marie Rocafort, in a stunning case about legal technicalities gone horribly awry. Police raided the caregiver’s home in September 2012, seizing 5.6 pounds of the plant she was using to treat seriously ill patients. The courts found this amount far exceeded the 2.5 ounces of “usable” marijuana per patient that caregivers are allotted by law to grow. However, Rocafort’s 5.6 pounds of plant had only been harvested four days prior to its seizure by police, which experts claim is far short of the 10 days it takes harvested pot to properly dry and become viable for use.

Defense attorneys thus justifiably argued the caregiver’s weed wasn’t “usable,” so, not illegal — but the case has been lumbering on, wasting taxpayer money to quibble over a definition about a plant which most people don’t view as an illicit substance in the first place.

According to MLive, 21 cities in Michigan have brought legalization or decriminalization measures to a vote; and 15 of those cities — including Detroit, Grand Rapids, Kalamazoo, and Lansing — have approved various decriminalization initiatives. In September, state Rep. Jeff Irwin introduced a bill — now backed by six additional representatives — to end cannabis prohibition (HB 4877), which would treat the plant as regulatorily, akin to alcohol. Additional legalization measures may wind up on the November ballot if two groups are able to gather enough signatures in time, which now seems highly likely.

In short, it seems almost the only people in the State of Michigan who want the prosecution, criminalization, and general prohibition of cannabis to continue are the police and the criminal justice system — the same police and system which have yet to bring charges against anyone for poisoning an entire city.

As The Free Thought Project reported in December, Governor Rick Snyder has knowingly allowed children, the elderly and other vulnerable people to face potential lifelong effects of being poisoned by lead in his refusal to investigate contamination claims by Flint residents months ago. They will suffer for the rest of their lives due to his criminal neglect — but, at least, the State is keeping them safe from the numerous benefits of cannabis and the dangerous caregivers who ensure their patients aren’t suffering.

It’s time to end the War on Drugs and start to pursue the criminals who deserve to be behind bars — and Michigan would do well to consider Gov. Snyder as a target.