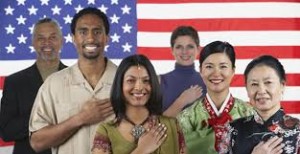 The overwhelming majority of immigration to the United States is the result of our visa policies. Each year, millions of visas are issued to temporary workers, foreign students, refugees, asylees, and permanent immigrants for admission into the United States. The lion’s share of these visas are for lesser-skilled and lower-paid workers and their dependents who, because they are here on work-authorized visas, are added directly to the same labor pool occupied by current unemployed jobseekers. Expressly because they arrive on legal immigrant visas, most will be able to draw a wide range of taxpayer-funded benefits, and corporations will be allowed to directly substitute these workers for Americans. Improved border security would have no effect on the continued arrival of these foreign workers, refugees, and permanent immigrants—because they are all invited here by the federal government.

The most significant of all immigration documents issued by the U.S. is, by far, the “green card.” When a foreign citizen is issued a green card it guarantees them the following benefits inside the United States: lifetime work authorization, access to federal welfare, access to Social Security and Medicare, the ability to obtain citizenship and voting privileges, and the immigration of their family members and elderly relatives.

These ongoing visa issuances are the result of federal law, and their number can be adjusted at any time. However, unlike other autopilot policies—such as tax rates or spending programs—there is virtually no national discussion or media coverage over how many visas we issue, to whom we issue them and on what basis, or how the issuance of these visas to individuals living in foreign countries impacts the interests of people already living in this country.

If Congress does not pass legislation to reduce the number of green cards issued each year, the U.S. will legally add 10 million or more new permanent immigrants over the next 10 years—a bloc of new permanent residents larger than populations of Iowa, New Hampshire, and South Carolina combined.

This has substantial economic implications.