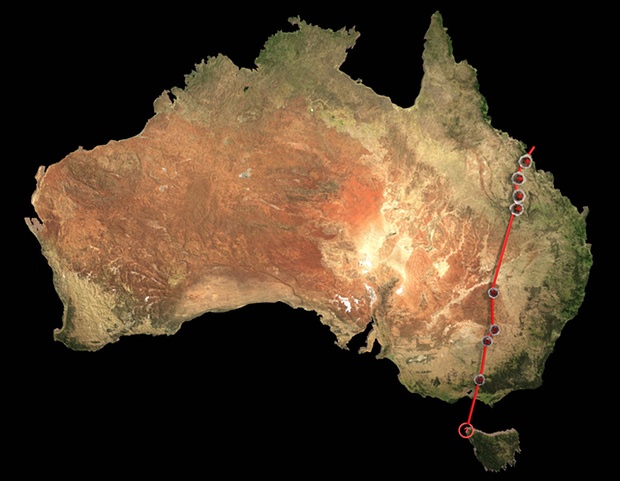 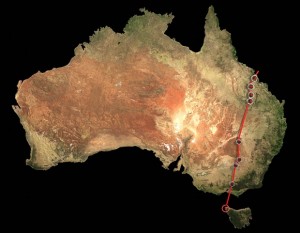 Huge and ancient underwater volcanoes discovered off coast of Sydney

The volcanic chain, which started its formation 33m years ago, runs from near the Whitsundays in Queensland to near Melbourne. It is nearly three times the length of the Yellowstone volcanic track in the US.

The volcanoes weren’t formed at the edge of tectonic plates, where most volcanoes occur. Instead, they came about from mantle plumes, which are upwellings of hot rock from around 3,000km below the Earth’s surface.

At around 130km underground, these plumes melt, breaching the outer layer of the Earth’s crust, called the lithosphere and creating visible volcanoes.

Scientists studied 15 of these volcanoes in a variety of ways, including analysis of the isotopes of the rocks and reconstructing the path of the volcano chain. The volcano chain has a notable gap in it of around 800km between the Queensland and New South Wales formations.

“Volcanoes in Queensland are impressive, they are very striking and you can see them from miles away,” said Dr Rhodri Davies of the Australian National University, who led the research, published in Nature.

“I don’t want to say those in Victoria and NSW are less impressive, but they are less striking. That’s because Earth’s strong rigid outer shell, not just the crust, the upper mantle, varies in thickness. The gap in the chain coincides with a thickness where the plume can’t melt, whereas in Queensland the plume can get to a shallower depth, meaning you get more impressive, larger volcanoes.”

A single, fixed plume of hot rock created the chain of volcanoes due to the gradual northwards movement of the Australian continent, at a rate of around 7cm a year.

The northernmost volcano was created at Cape Hillsborough 33m years ago, with the shift in the Australian plate resulting in the plume pushing through in Victoria around 9m years ago. Scientists have named the volcano chain Cosgrove after an extinct Victorian volcano.

Davies said the plume is now placed under the Bass Strait, which lies between Victoria and Tasmania. He added that the most recent volcanic eruption in Australia took place at Mount Gambier 5,000 years ago, in a separate volcanic formation.

“It is always nice to discover something like this,” Davies said. “We are getting much better at understanding volcanism in Australia. People don’t realise we have the most extensive volcanoes on Earth but there are still some individual provinces yet to explore.”