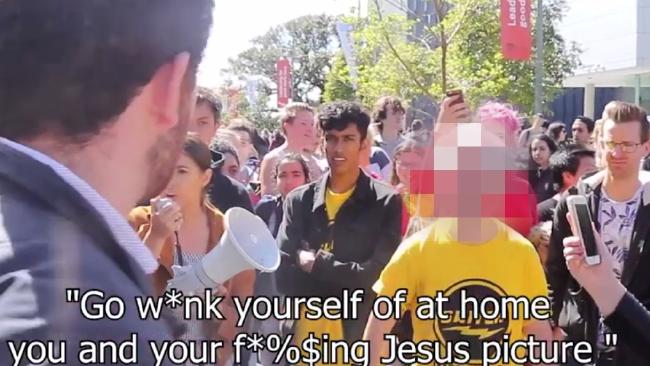 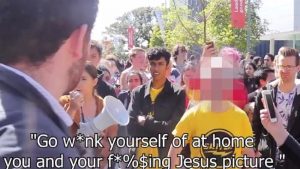 SO now we see why rainbow warriors didn’t want a people’s vote on same-sex marriage.

It was because they knew we’d see their true, intolerant colours.

Yes campaign HQ knows thuggery won’t win over Middle Australia, but their foot-soldiers are revealing themselves as fascistic bullies who vilify and intimidate anyone who dares to disagree.

Last week’s abusive exhibition by same-sex marriage activists at Sydney University was the clearest example yet.

On Thursday, about 15 students, including members of the uni’s Catholic Society, set up an information table on the main campus thoroughfare with placards saying: “It’s OK to Say No”.

They offered free kebabs and two large bowls of delicious Lebanese hummus made by one of their mothers.

It was the first time the No campaign has had a presence on campus where “Marriage Equality” stalls have featured almost every day this semester.

“The idea was pretty much to give the No campaign perspective on campus,” said 21-year-old IT student, Francis Tamer, one of the organisers.

“The message was that it’s OK to vote No. We weren’t looking to convince people how to vote. We’re just saying its OK to have your own opinion.”

After an hour 40 to 60 activists arrived with a megaphone, led by “Queer officers” of the Students’ Representative Council, which has an annual budget of $1.7 million.

For the next five hours they screamed abuse at the Catholic students, calling them: “homophobes” “bigots” “neo-Nazis” “gay-bashers” and chanting: “Bigot scum have got to go” and “We will fight, we will win, put the bigots in the bin”.

They up-ended the table of kebabs and threw bowls of hummus on the ground. They stole pamphlets and placards, threw condoms and glitter at the students, chalked “F..k off bigots” on the path, swore and yelled anti-Christian abuse:

“Go f..k yourself. Go wank yourself off at home with your f..ing Jesus picture”.

“You don’t belong on campus. You are bigots and haters:”

“Didn’t you know Jesus was bisexual?”

The abuse was recorded on video.

One activist in a yellow T-shirt, who we have chosen not to name, is seen shouting at Tamer: “I wish I could kick you in the f.. ing face. That would be so satisfying.”

“They wanted to provoke us,” says Tamer. “But I told our members don’t engage.

“A lot of people have now seen the Yes campaign for what it really is… If this is what’s happening now, what will happen later, after [same-sex marriage] is enshrined in law?”

Tamer, who is almost 6 foot 4, spent most of the day with his hands in his pockets, showing admirable restraint.

“But I wasn’t expecting the violence… I didn’t think they’d go that far. We couldn’t even talk with them.”

It was Mattar’s mother who made the hummus which was thrown on the ground by the rainbow ferals.

They smeared it on his clothes, the back of his neck and his face. They also kicked him and others in the shins to get them to drop their placards.

Later in the afternoon, an activist ran full pelt at Mattar, while another male tried to grab his placard. He managed to stay upright but, at this stage, watching NSW police intervened.

“There were times I did get mad,” said Tamer. “It’s not easy to cope with that for five hours straight. But we knew we were representing more than just ourselves…

“I thought everyone who walked past, they’re going to rethink and reconsider — and see maybe it’s the Yes campaign that lacks love.”

“[The other side] are trying to convince people there is only one moral way and if you think any other way you are evil, you are a bigot, you are hateful.”

“But we don’t want anyone to think it’s not OK to vote No.

“You can’t make the whole country not vote No in their own homes. At the end of the day your vote is your vote.”

He says the Yes campaign assumes they have locked up the youth vote.

The University’s Queer Action Collective issued a statement saying there was no violence, “aside from police aggression”, and claiming Catholic Society members had compared LGBTI relationships to “bestiality” and paedophilia.

Tamer and Mattar say that nothing of the kind was ever said. There is no evidence to the contrary in two hours of video I have seen, provided by Tamer and the university union.

What the videos do show is that members of the Catholic Society were subjected to vilification, intimidation, and threats “because of views they hold on the [marriage] survey or in relation to their religious conviction,” as defined by emergency legislation rushed through parliament last week.

Yet Attorney-General George Brandis’s office did not respond to questions on Friday about whether the legislation should apply.

Tamer and Mattar are deciding whether to take their complaints further. But the abuse they copped was a better advertisement for a No vote than any number of kebabs or pamphlets.

IT’S OK for Ian Thorpe to front the Yes campaign for same-sex marriage.

It’s OK for the Wallabies, the NRL, the ARU, the AFL, Cricket Australia, Tennis Australia, Football Federation Australia to support a Yes vote.

It’s OK for the nation’s sporting bodies to bring politics into an arena which previously has been a haven from the troubles of the world.

It’s OK to disenfranchise a significant percentage of players and supporters in the process.

But it’s not OK for Wallaby star Israel Folau respectfully to disagree.

“I love and respect all people for who they are and their opinions, but personally, I will not support gay marriage” he tweeted last week to a chorus of criticism, calling him, among other insults, a “bad human being”.

Nor is it OK for former tennis champion Margaret Court, admittedly less respectfully, to state her opposition to same sex marriage.

The backlash has now resulted in the Cottesloe Tennis Club ditching her as patron.

The club has cited various excuses for why it has disrespected its most accomplished hometown champion, but no one is fooled.

We recognise tyranny, even when it comes in rainbow colours.