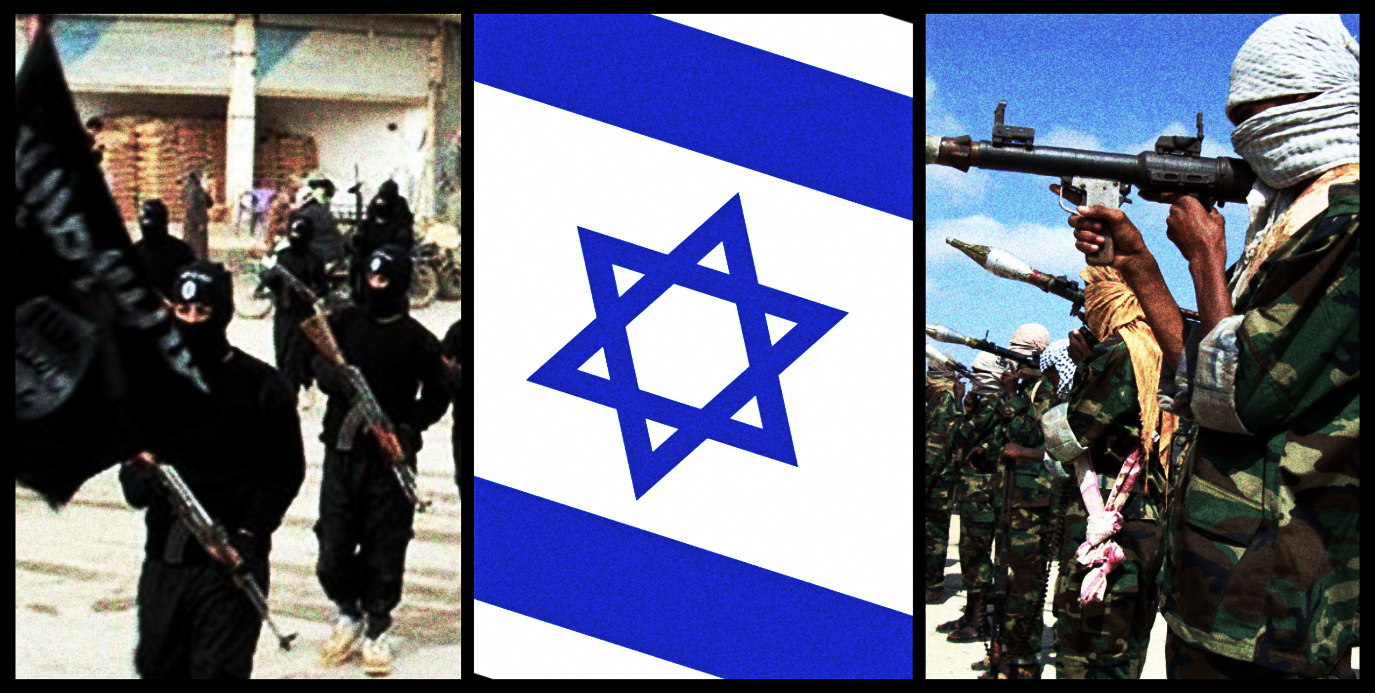 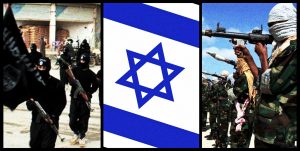 This article offers further proof of the Israeli-Islamic terrorism link, beyond what I have already exposed in previous articles such as Top 10 Indications or Proofs ISIS is a US-Israeli Creation. There is really no doubt that Israel is following the logic that “the enemy of my enemy is my friend.”

Since its arch-enemy Iran is helping Syrian President Bashar Al Assad, Israel is turning to the enemies of the Syrian Government to collaborate and conspire with them in the overthrow of Assad.

These enemies are the “Syrian rebels”, or Salafist, Wahhabi and Takfiri terrorists (see this article for a breakdown of what all these terms mean, and how mainstream Sunni Muslims are distancing themselves from these violent groups).

Whether it’s ISIS, Al Qaeda, Fatah Al Sham, Jahbat Al Sham, Al Nusra Front, Syrian rebels in general or any other Takfiri terrorist group, Israel has been actively pursuing relationships with all them to undermine the Iran-Syria alliance.

The following 11 clues are arranged in chronological order, from the most recent (#1) to the oldest (#11), however all the following articles and reports have been written within the last 2 years.

Do you think Israel is just doing this out of their love for humanity?

“Lieutenant Colonel Tomer Koler told reporters in a phone conference on Wednesday that the hospital would be located on the Syrian side of the fence but on the Israeli side of the demarcation line in the Golan Heights, which is Syrian territory occupied by Israel …

“He noted that Israel had delivered what he called “humanitarian aid” into Syria, including hundreds of tons of food and clothing, as well as fuel and equipment such as generators.”

“Humanitarian aid”? Smells like another Orwellian euphemism, similar to humanitarian intervention. Try “takfiri terrorist support” and you’ll be closer to the mark.

2. Israel takes Fatah Al Sham / Al Nusra Front terrorists to Israeli hospitals: According to a June 25th 2017 article from the AhlulBayt News Agency (an Iranian source), Israel is continuing to accept Syrian terrorists who have been wounded in battle with the SAA (the Syrian Arab Army which is the official, legitimate army of the Syrian Government) in Quneitra province.

“The sources reported that a number of injured members of Al-Nusra Front (also known as Fatah al-Sham Front or the Levant Liberation Board) have been transferred to the Israeli hospitals via al-Hamidiyeh region in Quneitra countryside. The army troops repelled Al-Nusra Front’s offensives in the Southwestern province of Quneitra, leaving tens of terrorists dead and many more wounded.

“Later, the Israeli aircraft attacked the Syrian government forces’ tanks and artillery positions South-West of the war-hit country. This is not the first time that Al-Nusra terrorists have been transferred to Israeli hospital after sustaining injuries in clashes with the army soldiers.

“In September and November 2016, tens of wounded fighters of Fatah al-Sham (formerly know as the Al-Nusra) Front were transferred from Quneitra battlefields to Israeli hospitals in the occupied Golan Heights, as several Israeli ambulances entered Syria’s Southern province of Quneitra and transferred those terrorists injured in clashes with Syrian Army troops to their hospitals in the occupied part of the Golan Heights.”

3. Israel is coordinating attacks inside the Golan Heights with Al Nusra: Further evidence of the Israeli-ISIS connection can be found in this PressTV article of June 25th 2017, which reports a Syrian military source.

Israel claims plausible deniability by saying their attacks on Syria are in retaliation for attacks that come out of Syria against Israel (though no necessarily from the SAA).

“Israel’s airstrikes on the Golan Heights on Saturday coincided with a push by Nusra Front terrorists against army (i.e. SAA) positions …

Israeli-Islamic terrorism is right in line with the Mossad’s motto.

4. Israel is making frequent contact with Syrian rebels and terrorists: This PressTV article from June 21st 2017 highlighted a quote from the Report of the Secretary-General on the United Nations Disengagement Observer Force for the period from 2 March to 16 May 2017 dated June 8th 2017.

“… the growing interactions between the two sides could lead to escalation and cause harm to members of the UN Disengagement Observer Force deployed to the Golan Heights.

“UN observers listed 16 meetings between the Israel forces and the Syria militants in the border area, including on Mount Hermon, in proximity to UN outposts in Syria’s Quneitra Province and the Golan Heights, from March 2 to May 16.”

It should of course be noted that the entire Golan Heights region was annexed by Israel during its 6-Day War of 1967.

It has been illegally occupying that region ever since, for over 50 years now. Rather than trying to find a way to give some territory back to Syria, Israel is pushing forward to create a buffer zone to further entrench themselves in the stolen land.

5. Israel communicates with and funds Islamic Terrorists to maintain its buffer zone in the “stolen Golan”: Israel stole the Golan Heights region from Syria during the 6-Day War of 1967, and has up to this point refused to give back all the territory it illegally annexed.

This Russia insider article from June 19th, 2017, highlights how Israel is attempting to create a new buffer zone around Quneitra in Syria so that it can retain control of the Golan Heights forever.

“Israel has been regularly supplying Syrian rebels near its border with cash as well as food, fuel and medical supplies for years, a secret engagement in the enemy country’s civil war aimed at carving out a buffer zone populated by friendly forces.

The Israel army is in regular communication with rebel groups and its assistance includes undisclosed payments to commanders that help pay salaries of fighters and buy ammunition and weapons, according to interviews with about half a dozen Syrian fighters.”

The rest of the article is hidden behind a paywall. Subsequently, several other articles summarizing this have sprung up, such as this one which also states:

“The commander identified by the nom de guerre Abu Suhayb who leads the terrorist group told the Journal that he receives about $5,000 a month from Israel.”

7. ISIS videos are distributed to the world via SITE, an Israeli Intelligence Front: I have exposed previously on the The Freedom Articles how the organization SITE (Search International Terrorist Entities) led by Rita Katz is a Mossad or Israeli intelligence front.

Isn’t it strange and very convenient how almost all (if not all) of ISIS’ videos (beheadings, killings, etc.) come via SITE? In this article from May 10th, 2017, Christopher Bollyn exposes SITE and people connected to it, such as Aaron Zelin – a Jewish Zionist from Illinois who works with Zionist think tanks like the Washington Institute for Near East Policy and who runs Jihadology.net.

8. Israeli Prime Minister Benjamin Netanyahu quoted as saying that Israel will keep taking in Syrians to its hospitals: We also have an April 9th 2017 article from the Times of Israel that quotes Netanyahu as admitting that Israel has helping been helping wounded Syrian civilians, and will continue to do so:

“Netanyahu [said] “… Israel is treating injured civilians from Syria as part of the humanitarian effort. We will continue to do so.””

Hasoon said that since the weekend, the quiet village of Khadr near the Syrian border has been subject to persistent bombardments by Jabhat Fateh al-Sham militants.

“We have gotten information from all fronts and from people who are responsible within the village that the Nusra Front is operating with unprecedented support from Israel, because the organization’s fighters are advancing in those places where the Israel Defense Forces had previously bombed Syrian positions and the organization is holding those positions, in addition to the logistical and medical assistance it’s getting from Israel.”

Citing eyewitnesses, Hasoon said that the Jabhat Fateh al-Sham fighters have advanced technological equipment that gives them an advantage over Assad’s forces. “To date dozens have fallen and the fighting continues, all with Israeli support,” he wrote.”

Halevy is a major general in the IDF (Israel Defense Forces) and the current chief of the Israeli Military Intelligence Directorate. According to the article, which used Hebrew-language NRG site as its source, Halevy openly declared that Israel “prefers ISIS” to the Syrian Government and that Israel does not want to see ISIS defeated in the war.

“Halevy went on to express concern that the defeat of ISIS might mean the ‘superpowers’ leaving Syria, saying this would put Israel ‘in a hard position’ after being so opposed to the survival of the Syrian government.

“He then said Israel will do ‘all we can so as to not find ourselves in such a situation,’ suggesting that the Israeli military is looking at direct support for ISIS as a matter of policy, and not just rhetoric.”

Islamic terrorism and creations like ISIS are, of course, not only supported by Israel. There is a mountain of evidence revealing the role of the US, UK, Turkey, Saudi Arabia, Qatar, UAE and others.

In this video posted in 2015 former VP Joe Biden openly admits that ISIS terrorists are being funded by the allies of the US (and therefore of Israel).

In November 2015, Russia exposed how ISIS trucks were carrying oil out of Syria to fund their operations, and presented evidence “that provided examples based on our data on the financing of different Islamic State units by private individuals. This money, as we have established, comes from 40 countries and, there are some of the G20 members among them.”

In June 2017 Turkish politician Enis Berberoglu was sentenced to 25 years in prison for the crime of leaking secret documents to a newspaper showing the Turkey’s MIT (National Intelligence Organization) shipped weapons to foreign-backed Takfiri terrorists in Syria.

US support of ISIS is well known, as is the fact that Britain helped to create ISIS along with America.

The Israeli-Islamic Terrorism Connection: The Game is Up

Both radicalized individuals and key Zionist players (both using religion as an excuse to steal and kill) are involved. It’s a slick game but the cat is out of the bag.