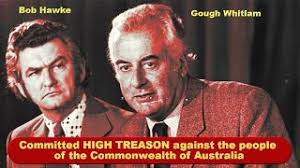 Whenever you meet someone who is unaware of how the political parties have betrayed our trust in them to govern us responsibly, this simple explanation serves as a guide for you. (Watch the video at the end of this article)

Although this list shows only four steps, they have actually been working behind the scenes to change a multitude of lawful Acts ever since 1960 to deprive us of our lawful common law that is based in our Commonwealth of Australia Constitution Act 1901. They have done this by enacting the Reprints Act, and then changing laws to suit themselves to increase their power over our lives.

Each step is explained, but you should practice speaking the list out loud and work to simplify it into your own words so that you can tell each person you as quickly and simply as possible how we have been betrayed. You should be able to tell this story in no more than one or two minutes.

NOTE: click on the Bold/Italic links above to learn more details.

These four events have resulted in the political parties taking complete control over our government and our lives. You can read the full story and watch a video explaining this in more detail here:
Political Party Destruction

When you finish telling people these four facts they will no doubt be shocked and want to know how they can fix it.

Ask them to go to the Political Party Destruction and How do we Fix it? pages on the Common Law website, watch the videos, and then follow the links to join a common law assembly.

Dick Yardley’s book, Political Party & Religious Leaders TREASON, Treachery & Sabotage details exactly how the political parties betrayed the Australian people and carried out the greatest theft of all time: The theft of a whole continent, it’s people, and its riches.

Click on the image or the link below to buy Dick’s book:

One thought on “A Simple Explanation about government TREASON”