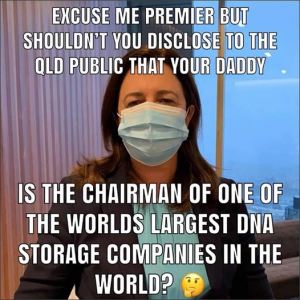 Townsville Residents & Ratepayers Association
INCASE YOU HAVE NOT BEEN FOLLOWING THE KESWICK ISLAND FIASCO YOU WOULD NOT BE AWARE OF THIS LITTLE GEM.
The Queensland premier Anastasia Palaszczuck’s father is the chairman of a DNA and gene company!
This morning we stumbled upon some interesting information. GTA (Gene Technology Alliance): Gene Data Storage and Application with direct links to China is basically a giant DNA storage and research project happening right here in Australia.
It’s also apparently known for it’s artificial intelligence technology which apparently assists in their research and their goals of manipulating human gene sequencing (playing with the genetic makeup of the human race).
And guess who is chairman?  Henry Palaszczuk. Yep, Anastasia Palaszczuk’s own father.
It’s a new trillion-dollar industry, but they were a little scarce in the gene pool, so… get ready for it…
…”by combining advanced gene sequencing technology and blockchain storage technology, it adopted unique blockchain incentive mechanism to quickly attract individual users, gene sequencing companies, medical, pharmaceutical, health services and other data applications on the same platform, as a result of which, a gold mine of gene data storage and application has been built with a global genetic data storage as the core and profound application value.”
The next step in the total control and manipulation of humanity and Australia is tied right up to it.
We also can extend this link to the sale of Queensland assets to the Chinese as we are aware of connections to Trad, The Premier and now most likely through to her father Mr Henry Palaszczuk as a connection to the CCP.
AND GUESS WHO HAS BEEN PROMOTING ALL OF THIS FOR A LONG TIME?
Klaus Schwab. Founder of the World Economic Forum and THE GREAT RESET.
https://www.australiansovereigntyalliance.com/…/the…
https://www.benzinga.com/…/the-grand-opening-of-gta…
https://ca.sports.yahoo.com/…/gta-gene-chain-leading…
https://medium.com/…/gta-foundation-chairman-mr-henry…
http://www.gtachain.io/page86

5 thoughts on “Anastasia Palaszczuck’s father is the chairman of a DNA and gene company!”