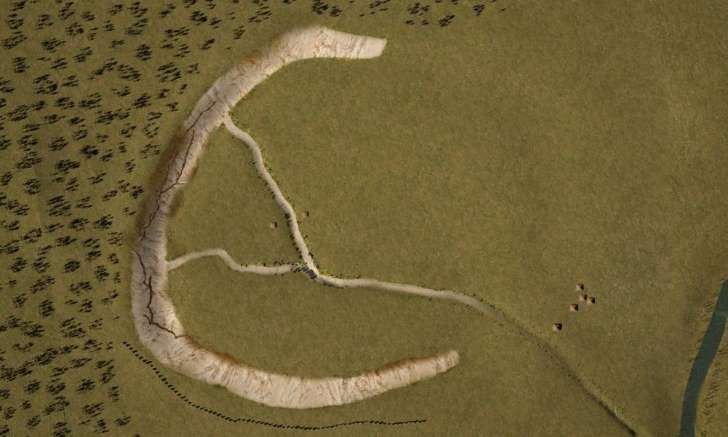 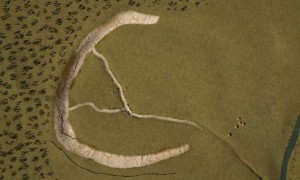 Archaeologists have discovered the remains of a massive stone monument buried under a thick, grassy bank only two miles from Stonehenge .

The hidden arrangement of up to 90 huge standing stones formed part of a C-shaped Neolithic arena that bordered a dry valley and faced directly towards the river Avon.

Researchers used ground-penetrating radar to image about 30 intact stones measuring up to 4.5m tall. The fragments of 60 more buried stones, or the massive foundation pits in which they stood, reveal the full extent of the monument.

“What we are starting to see is the largest surviving stone monument, preserved underneath a bank, that has ever been discovered in Britain and possibly in Europe,” said Vince Gaffney, an archaeologist at Bradford University who leads the Stonehenge Hidden Landscape project. “This is archaeology on steroids.”

The stones are thought to have been hauled into position more than 4,500 years ago to form the southern edge of a ritual arena centred on a natural depression. The stones appear to have joined up with a chalk ridge that had been cut into the accentuate the natural border.

“We presume it to be a ritual arena of some sort,” said Gaffney, whose team has mapped the terrain and subsurface features around Stonehenge with a rich suite of instruments. He will describe the latest findings from the site on Monday at the British Science festival in Bradford.

Images of the buried stones show them lying down, but Gaffney believes they originally stood upright and were pushed over when the site was redeveloped by Neolithic builders. The recumbent stones became lost beneath a huge bank and were incorporated as a somewhat clumsy linear southern border to the otherwise circular “superhenge” known as Durrington Walls. “This is a new element of how the Stonehenge landscape was transformed.”

A mile in circumference, Durrington Walls is one of the largest known henge monuments. It is surrounded by a ditch and a 40m-wide, 1m-tall outer bank. The henge surrounds smaller enclosures and timber circles from a later settlement.

Two huge pits have been discovered in a two mile-long monument called the Cursus that lies to the north of Stonehenge. The pits seem to form an astronomical arrangement: on midsummer’s day, the eastern pit’s alignment with the rising sun and the western pit’s alignment with the setting sun intersect where Stonehenge was built 400 years later.The Stonehenge Hidden Landscape project has transformed how archaeologists view the ancient site, which sprawls over 4 sq miles of Salisbury Plain in Wiltshire. The main monument stands at the heart of a landscape rich with burial grounds, pits and chapels. Last year, researchers found the remains of 17 new chapels and hundreds of other archaeological features scattered across the site.

The rise and fall of the newly discovered monument at Durrington Walls suggests that buildings were modified and recycled since the first stones were laid around 3100BC. A large timber building encased in chalk is thought to have been a house of the dead where defleshing was performed as a burial ritual.

Paul Garwood, an archaeologist and lead historian on the project at the University of Birmingham, said the the new discoveries at Durrington Walls changed fundamentally how researchers understood Stonehenge and the world around it. “Everything written previously about the Stonehenge landscape and the ancient monuments within it will need to be rewritten,” he said.

Nick Snashall, a National Trust archaeologist for the Avebury and Stonehenge world heritage site, said: “These latest results have produced tantalising evidence of what lies beneath the ancient earthworks at Durrington Walls. The presence of what appear to be stones, surrounding the site of one of the largest Neolithic settlements in Europe, adds a whole new chapter to the Stonehenge story.”