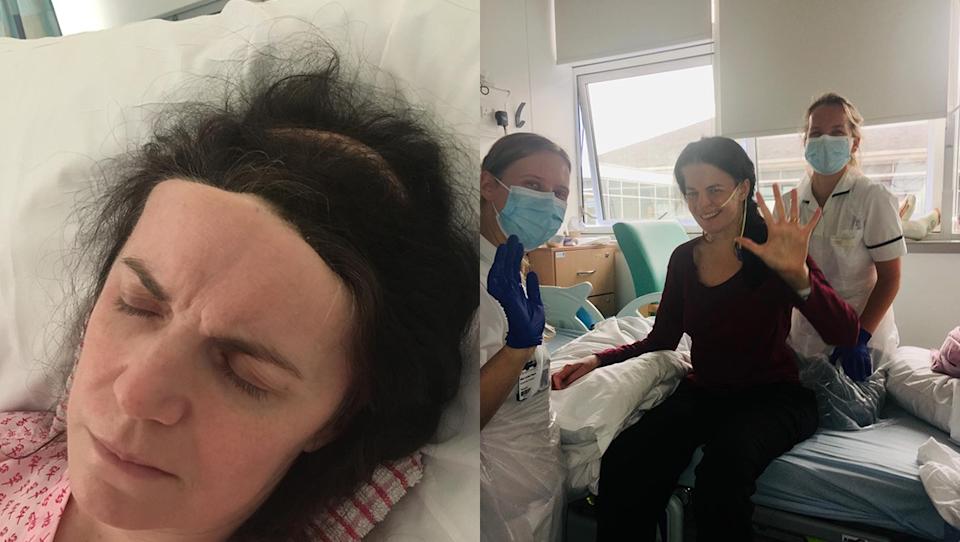 Melle Stewart has had a long recovery following the stroke, having been in an induced coma and going through rehabilitation. Source: GoFundMe

An Australian actress living overseas has received an influx of support after suffering from a side effect of the Covid-19 vaccine.

Melle Stewart, a healthy 40-year-old Australian actress living in London, was “happy” to receive her first dose of the AstraZeneca Covid vaccine.

According to GoFundMe, “she has been and continues to be an advocate for vaccination”, however her life was turned upside down on June 8, two weeks after her first dose.

Waking up at midnight two weeks after her first vaccination, Ms Stewart had a “strange feeling” on the right side of her body. When she tried to get out of bed, she collapsed and was rushed to hospital.

Her state deteriorated quickly; she lost all movement on the right side of her body and the ability to speak, and she began having seizures.

Ms Stewart was diagnosed with Vaccine-Induced Thrombocytopenia Thrombosis (VITT), a rare condition which is linked to the AstraZeneca vaccine.

Ms Stewart suffered a severe stroke, which caused two large clots in the main veins in her brain, which caused a secondary bleed in her frontal lobe.

The actress was in an induced coma for three weeks, she was ventilated and received blood transfusions and put on anti-clotting and anti-seizure medication.

While she was at hospital in London, neurosurgeons had to remove a large part of Ms Stewart’s skull to relieve the pressure on her brain.

Ms Stewart spent four and a half weeks recovering in the ICU and was then transferred to an Acute Stroke Unit to commence her rehabilitation, before being taken to a rehabilitation hospital in London for more “intensive treatment”.

According to the GoFundMe, she was fit and healthy before she had the stroke.

“The devastation caused by VITT has been profound,’ it said.

“Prior to vaccination, Melle was a fit, healthy 40-year-old, a successful professional actress, dancer and singer who had never been in hospital before.”

However, at this stage, Ms Stewart will be in hospital until 2022. She is learning how to walk, talk and move her right arm and hand.