Independent Senator, Jacqui Lambie, has warned unvaccinated Australians that the rest of the population are coming at them, “lock, stock, and barrel.”

Lambie made the disturbing comments during an appearance on Sky News Australialast week, where she warned that vaccinated Australians are getting “agitated” with “anti-vaxxers,” saying “we’re going to start to get more hardcore.”

The Tasmanian Senator told First Edition host Peter Stefanovic that the tide is turning against the unvaxxed who are going to feel the “heat” and “pressure” from an increasingly frustrated population.

“I think people are getting quite agitated outside,” Lambie said. “And those anti-vaxxers out there, that 20-30 percent are the ones out there protesting on the street, and doing that sort of thing. I think you’re going to find the rest of us coming at you, lock, stock, and barrel.

Lambie continued: “And I think that’s what you’re going to see, massive division out there, and it’ll be us on the front foot. That’s what I think is going to happen. I think the tide is going to turn on those anti-vaxxers out there and you are really going to feel the heat.” 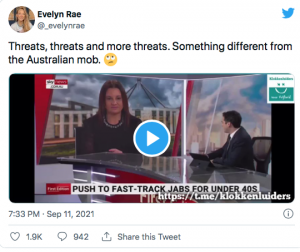 Understandably, the “threatening” remarks drew criticism on social media, with some accusing the Senator of incitement against unvaccinated people.

Former WA Senator, Rod Culleton said, “Monica Smit is in gaol for incitement, while this ‘thing’ is free to incite violence.

“Investigation on the way!” he added.

“You can’t trust the lot of them in Tasmania,” he added. “All making threats against our personal medical freedoms.”

Somewhat ironically, Senator Lambie, earlier this year drilled Brendan Murphy, Secretary of the Department of Health, suggesting the lack ofcompensation available for Australians who experience adverse side effects from the vaccines may be contributing to vaccine hesitancy.

“So, even if they win, and that will be an uphill battle for them, do you think that the lack of compensation system has to do with why people are hesitant to go out and get a jab? Because trust me, Mr. Murphy, as a Senator, I’m saying, you’re not compensated.

Lambie continued: “I’m making that very clear to people out there. I’m not going to sit there and lie to them. So, if something goes wrong, I’m telling them how hard it is because that is my job as a Senator.” 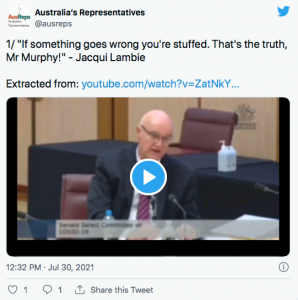