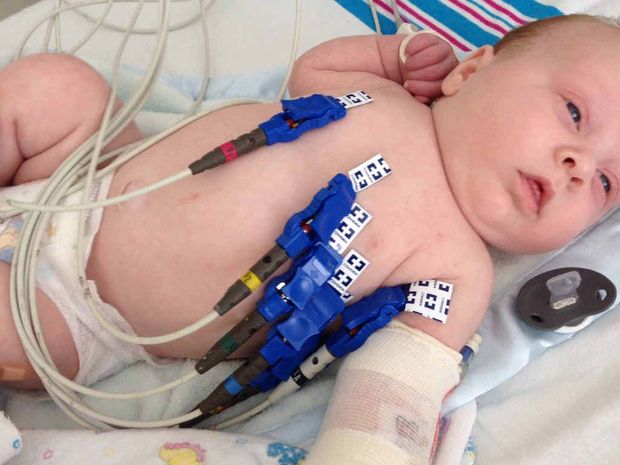 WHEN Kellie Evans bought her 10-week-old baby into a Rockhampton medical centre, she didn’t think twice about giving him his routine vaccinations.

But within minutes of young Brooklyn receiving two immunisations, he stopped breathing.

After being resuscitated by doctors at the clinic he started having seizures and stopped breathing twice more in that hour.

Kellie and her husband Darren have been with Brooklyn in a Brisbane hospital since Friday, when he was taken from Rockhampton Hospital by the Royal Flying Doctor Service.

Darren, who is a local jockey, said Kellie has been by Brooklyn’s side 24/7 since he was hospitalised.

“He was pretty much dead,” he said.

“They had to close the medical centre down and call the ambulance.

“We’re pretty much shell-shocked … the worst part is just waiting.”

Darren said doctors still don’t know what caused Brooklyn to stop breathing or start having seizures, which have returned each day.

So far all he knows is they don’t believe the vaccinations caused it.

“No one knows what it is, they’re not sure what caused it,” he said.

Darren said their only theory is a possible hole in his oesophagus which is sending air into his stomach and food into his lungs, but so far all tests results haven’t shown anything wrong.

Darren and Kellie have been staying with family, while Darren’s mother looks after their four-year-old daughter Chanel.

Brooklyn was initially taken to the medical centre last Tuesday to have medical staff assess an umbilical hernia, and while there they decided to give him his two-month check-up.

A friend has set up a Go Fund Me page to help raise money for his treatment.

The National Jockey Trust has also lent a hand with counselling and accommodation closer to the hospital so they don’t have to worry about paying for car parking, which has cost them $30 a day.

Anyone wishing to donate can do so at www.gofundme.com/m5723g.