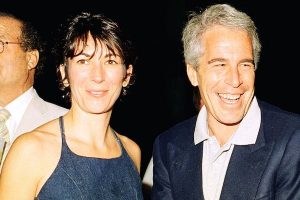 Dead pedophile Jeffrey Epstein’s longtime girlfriend Ghislaine Maxwell allegedly has videos of United States politicians having sex with underaged girls according to a former jewel thief and friend of Epstein.

The anonymous source, who goes by the pseudonym William Steel, dropped the information to The Sun last week and wrote the book “Sex and the Serial Killer,” where he claims that he provided jewelry to Epstein’s girls who were groomed by and also had sex with Maxwell.

Steele states that Epstein and Maxwell tried to impress him by showing off videos of political figures and elite individuals having sex with underage girls.

He also says that he is open to testifying against Maxwell and has already given over all the information he has to authorities.

“Steel, who claims he once swiped computer discs from the couple and sent the discs to authorities, did not reveal the identities of the people he says he saw in the videos,” The New York Post reported. Steel stated Maxwell did “everything and anything in bed,” but never assaulted or even touched any underaged girls.

Check out what the Daily Wire reported:

According to Steel, Maxwell, who dated Epstein at one time, told him that she knew the Epstein would be “the death” of her.

“She said to me that she often thought she needed to do something about Epstein, telling me, ‘He is going to be the death of me,’” Steel relayed to The Sun.

Apparently, the author added, Maxwell had an escape plan if she were to ever be caught, which she dubbed the “Polanski plan” after filmmaker Roman Polanski, who fled the U.S. for France after being convicted of raping a 13-year-old girl in 1977.

“She told me about her Polanski plan where she would flee to France because they couldn’t extradite her,” he allegedly recalled.

Fox News reports: “Prosecutors alleged that Maxwell, between 1994-1997, ‘assisted, facilitated and contributed to Jeffrey Epstein’s abuse of minor girls by, among other things, helping Epstein to recruit, groom and ultimately abuse victims known to Maxwell and Epstein to be under the age of 18.’ They added, ‘Moreover, in an effort to conceal her crimes, Maxwell repeatedly lied when questioned about her conduct, including in relation to some of the minor victims… when providing testimony under oath in 2016.’”