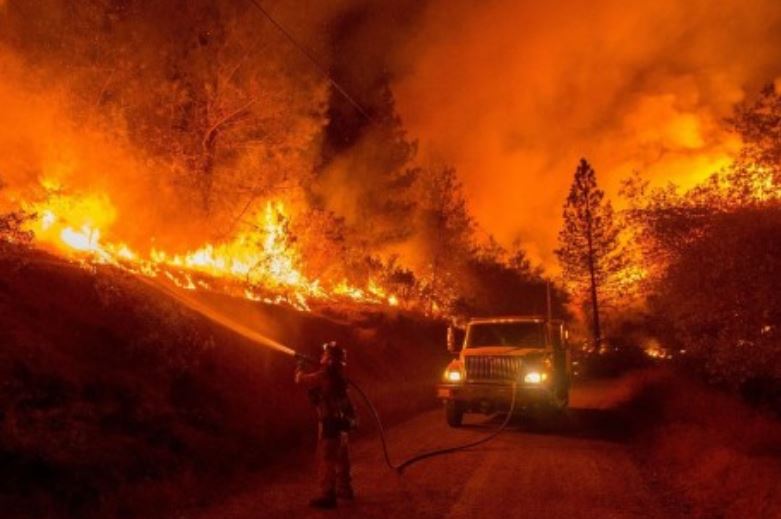 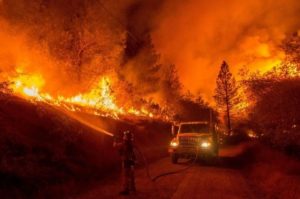 By Peter A. Kirby

It’s almost that time of year again when wildfires rage throughout California with previously unseen ferocity.

A multitude of factors have contributed to these extraordinarily large and intense California wildfires lately. The root cause of all these factors is the fallout from the ongoing chemtrail spraying operations.

Desiccation, contaminated water, harmful UV radiation, disease, and insect infestations all contribute to these wildfires, and all are the result of chemtrail spray.

Not only all that, but the chemtrail spray itself serves as an accelerant.

In this article, the authors note that chemtrails cause increases in combustibility, intensity, severity, and extent of these fires.

“Adverse effects include exacerbation of drought, tree and vegetation die-off and desiccation, and unnaturally heating the atmosphere and surface regions of Earth. Forest combustibility is increased by moisture-absorbing aerosolized particles.”

California gets a lot of chemtrail spray because today’s chemtrail spraying operations have a lot to do with controlling precipitation and lots of atmospheric water comes into California from the Pacific Ocean.

Today’s most common chemtrail spray is an atmospheric desiccant. These dispersed atmospheric particles dry out the air by bonding with tiny, atmospheric water particles.

Chemtrail spray has not only limited the amount of rainfall, and therefore groundwater, in coastal states like California, it has also denied California’s flora of its needed atmospheric moisture.

In total, chemtrail spray has made California dry as a bone and wildfires burn better in such conditions.

Not only is California’s flora being denied its needed moisture, the water it does receive is often poisoned by chemtrail spray.

You see, the most common chemtrail spray has been scientifically determined to be a substance known as coal fly ash. Coal fly ash is a toxic waste byproduct of the electrical power industry comprised of many different substances.

This contaminated precipitation is also altering soil pH, further weakening California’s flora. Ash is basic and its spraying has caused soils to turn from acid to basic, making it difficult for native plants to grow.

This is well documented by career wildlife biologist and master gardener Francis Mangels along with his colleagues from the United States Department of Agriculture Soil Conservation service. Details are in the author’s book.

These types of UV radiation (UV-C and UV-B) are generally thought to be almost entirely filtered out by the ozone layer, but the evidence shows otherwise.

The evidence shows that ozone depletion resulting from geoengineering activities is the reason why this is happening.

Relevant to the topic of our discussion, exposure to these types of UV radiation is harmful to plants such as trees.

The authors of “Deadly Ultraviolet UV-C and UV-B Penetration to Earth’s Surface” provide scientific evidence for this, including a picture of a tree that has been damaged by harmful solar radiation.

Once a tree is weakened by desiccation, poisonous water, and harmful UV radiation, it is more susceptible to fungal growth as well as insect infestation.

Susceptibility to fungal growth from exposure to harmful UV radiation is noted by Drs. Herndon and Whiteside.

In the case of insect infestations, healthy trees can successfully repel the incursions of harmful insects such as the notorious bark beetle, but weakened trees are voraciously consumed.

Since 2010, the bark beetle alone has been attributed to the deaths of well over 100 million California trees. The combination of fungal growth and insect infestation has killed untold numbers of trees in California.

Coal Fly Ash As An Accelerant

In a 2017 interview on Coast to Coast AM with George Noory, Dr. Herndon speculated that settled chemtrail spray dust covering California’s foliage may act as an accelerant.

He noted that finely dispersed atmospheric powders, even those that we might not expect, generally tend to combust. He cites the example of grain silos that explode when any type of flame or spark is present.

“Although speculative, the possibility should be considered that perhaps the aerosolized particulate matter upon settling on trees and vegetation may under some circumstances become pyrophoric, capable of ignition.”

A retired Petaluma, California fire captain by the name of John Lord confirms this claim. In a 2018 corporate media hit piece as well as in a March, 2020 interview, Mr. Lord characterizes settled chemtrail spray as, “highly combustible.”

It is easy for today’s mainstream media to ignore the real cause of California’s wildfires.

Remember – according to them, and contrary to a mountain of evidence, chemtrails do not exist. How could something that does not exist be the cause of it all?

The malfeasance of today’s fake news media creates a situation whereby politicians and government bureaucrats can easily attribute the wildfires to these other causes as well.

They just go along with what is being reported on television.

That’s politically expedient for them, but it ensures that the real root cause is not addressed and therefore nothing officially changes, the status quo remains intact, and these massively destructive wildfires continue.

“Bark Beetles in California Conifers: Are Your Trees Susceptible?” A report by the U.S. Forest Service, United States Department of Agriculture, February 2015

“When the Well Runs Dry” a report by the U.S. Forest Service, United States Department of Agriculture, March 2018