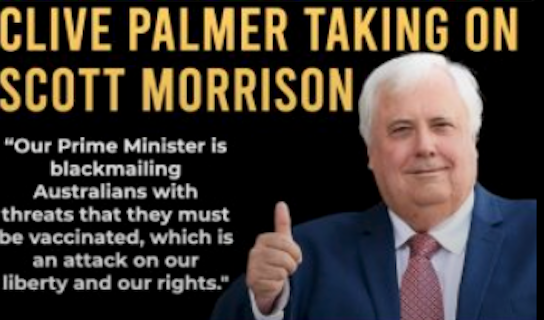 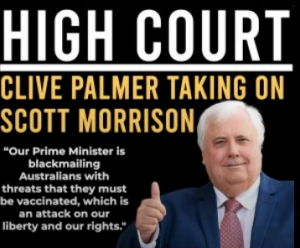 Mr Palmer said the proposal was unconstitutional and infringed the rights of all Australians.
“I will challenge Scott Morrison over this matter in the High Court,’’ Mr Palmer said.
“Our Prime Minister is blackmailing Australians with threats that they must be vaccinated, which is an attack on our liberty and our rights.

“This is a gross wrongdoing against Australians. This malfeasance cannot be tolerated, and I vow to make him personally accountable for any damages he causes Australian citizens.”
Mr Palmer said the Government’s COVID response had been a disgrace.

“It’s clear that people who have had the vaccine are still getting COVID and going to hospital.
“He still allows pharma companies to have exemptions against them if there are future problems with the vaccine and he has wasted many millions of taxpayer dollars on pharma orders.

“Meanwhile he is sending army troops into the streets to police our citizens. These acts are illegal,” Mr Palmer said.

“Regardless of the cost and resources I will hold him to account. I will make sure every asset he has will be taken from him.

“At this moment I’m putting together a top legal team to fight his despicable actions,’’ Mr Palmer said.