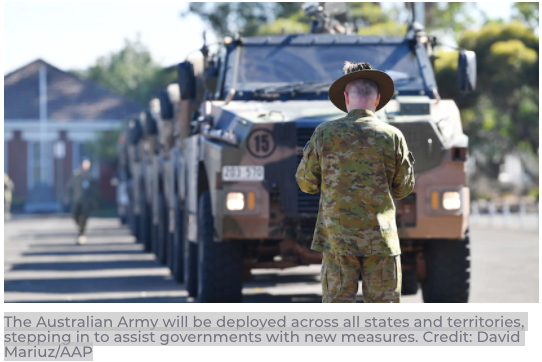 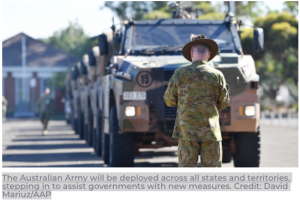 The Australian Army will be deployed across all states and territories, stepping in to assist governments with new measures. Credit: David Mariuz/AAP

The federal government will mobilise the military to enforce Australia’s toughest COVID-19 regulations yet.

From midnight on Saturday, all those returning to Australia will be placed in supervised self-isolation, in a hotel or other government-approved facility.

The Australian Army will be deployed across all states and territories, stepping in to assist governments with new measures.

But the prime minister says the army will not have the power to prosecute or arrest.

“Members of the Australian Defence Force are not authorised as enforcement officers, regarding prosecution in states and territories,” Scott Morrison said.

“That is the responsibility of law enforcement territories sworn in those jurisdictions.

“I have no doubt the Defence Force will do that in the most sensible way they can.”

Boots on the ground

The ADF will assist in both monitoring Friday’s regulations for returned overseas travellers and ensuring compliance checks with those in self-isolation at their homes.

More than two thirds of Australian’s more than 3,000 COVID-19 cases are from those recently returned from overseas.

Meanwhile, NSW premier Gladys Berejiklian says the state, which has the nation’s highest number of cases, is ready to move ahead of the Commonwealth if required and declare a lockdown over the weekend.

In NSW, police will have the power to issue fines of $1000 to individuals and $5000 to businesses that breach public health orders.