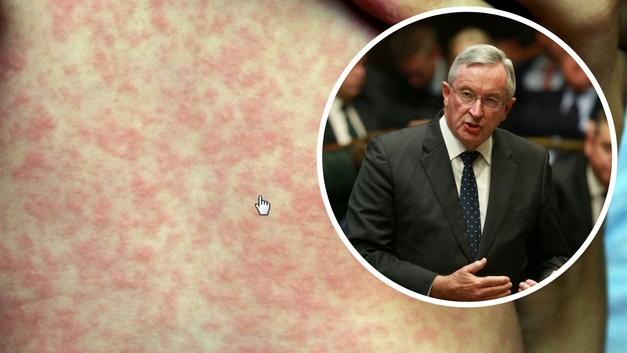 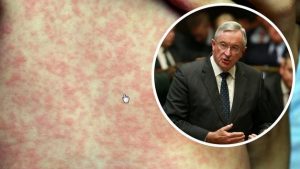 It’s time to put on a Hazmat suit, pack up your wagons & hightail it out of Sydney because our lives are now in extreme danger. WHY? According to Health Minister, Brad Hazzard the sky’s are about to rain blood because one Sydney man supposedly had a bout of Measles.

Minister Hazzard’s end of the world prediction stems from a  North Sydney Local Health District warning for measles after a peninsula man was diagnosed with the disease at the weekend. That’s correct, one single man from Sydney was supposedly diagnosed with Measles & now it’s not only the beginning of the end but Minister Hazzard has laid the blame for this infection on evil Anti-Vaxxers.

Public health director Michael Staff urgently issued a list of the areas the man had visited while infected, including Sydney’s northern beaches and Parramatta. It gets worse, the infected civilian may have also visited a local mall & surrounding suburbs, stumbling & drooling like a bloodthirsty Zombie straight out of the Walking Dead.

According to the Manly Daily, the main symptoms of Measles are a fever, sore eyes, coughing followed a few days later by a non-itchy rash. In fact, with a healthy immune system, an adult can be up & about in less than a week after suffering from Measles so why all the fear-mongering, Brad?

Once again, Measles typically begins with a mild to moderate fever, often accompanied by a persistent cough, runny nose, inflamed eyes (conjunctivitis) and sore throat. This relatively mild illness may last two or three days but these symptoms closely resemble the common flu so how can we be sure what the man had in the first place? It’s easy for Pharma controlled Government officials to blow these stories up in order to scare the general population because fear sells more vaccines.

Minister Hazzard is calling for all people living on Sydney’s Northern Beaches to immediately visit a Dr & get vaccinated against Measles. This is a very extreme call considering only one man supposedly had the Measles & no reports actually identify this man in any way.

Mr Hazzard slammed those, particularly on the northern beaches, who refused to vaccinate.

Pockets of people on Sydney’s Northern Beaches have a tribal mentality about vaccines being bad but this is proof that vaccines are good, WHAT THE HELL DOES THAT MEAN, BRAD????

I think the above statemnent by Minister Hazzard clearly shows that he has absolutely no idea what he is talking about so this is an individual who should in no way be shooting off his mouth for one suspected case of Measles & blaming healthy unvaccinted people.

According to Natural News, Long before there even was a vaccine for measles, this typically mild disease was seen as a common rite of passage for young children, much like chickenpox still is today. Contrary to what you may be hearing in pop news, it was virtually unheard of in the U.S. for anyone to die from measles, and those who contracted it gained an immune advantage — after recovering, those who develop natural measles infection never again have to worry about contracting measles because they now have lifelong immunity.

But without the vaccine, people would be dying left and right from measles, right? Not exactly. This popular myth has been proven false by published data showing that measles-related deaths were in major decline long before measles vaccines were introduced.

“By the late 1950s, even before the introduction of measles vaccine, measles-related deaths and case fatality rates in the United States had decreased markedly, presumably as a result of improvement in health care and nutrition,” explains one peer-reviewed study published in The Journal of Infectious Disease.

In regards to the infected Sydneysider who we know nothing about or if this person was vaccinated against Measles, how can we really know what happened & why is Minister Hazzard blaming the unvaccinated?

In an article by Science Mag A person fully vaccinated against measles has contracted the disease and passed it on to others. The startling case study contradicts received wisdom about the vaccine and suggests that a recent swell of measles outbreaks in developed nations could mean more illnesses even among the vaccinated.

A fantastic article released by The Weston A. Price Foundation entitled, Studies Show that Vaccinated Individuals Spread Disease, it states.  Health officials are blaming unvaccinated children for the recent measles outbreak that started at Disneyland. Scientific evidence demonstrates that individuals vaccinated with live virus vaccines such as MMR (measles, mumps and rubella), rotavirus, chicken pox, shingles and influenza can shed the virus for many weeks or months afterwards and infect the vaccinated and unvaccinated alike.

According to the Weston A. Price Foundation, the best protection against infectious disease is a healthy immune system, supported by adequate vitamin A and vitamin C. Well-nourished children easily recover from infectious disease and rarely suffer complications.

The vaccine industry is nothing more than a money-making scheme for the pharmaceutical industry. Perhaps a harsh statement (but true) – the uneducated public allow highly toxic ingredients to be injected into their bodies every day. But, are these vaccines scientifically proven to be effective at protecting our health? (no)

My question to Health Minister Brad Hazzard is, can you show 100% documented & scientifically verified proof that vaccines are safe & effective? Until this is done why would i risk the health or even the life of myself or my family by vaccinating them?

In the article, German Supreme Court Upholds Biologist’s Claim that Measles Virus Does Not Exist

it states, Our modern medicine’s paradigm is based mostly on the germ theory of microbes invading our bodies and causing disease, thus creating the need for a war against microbes to eliminate them all and conquer all diseases. Fear is the motivation for creating the weapons of antibiotics, antivirals, and vaccines befitting this concept, but our modern populations are sicker than ever.

It seems to me that the only thing Health Minister Hazzard is peddling is fear & propaganda. This is a very common theme that runs through our Government & mainstream media but there is never anything credible behind any of it.  Fear Mongering, lying & shaming people who only wish to protect their children from medical assault is a low act, Mr. Hazzard & your psychotic ramblings are not based on science or reality.