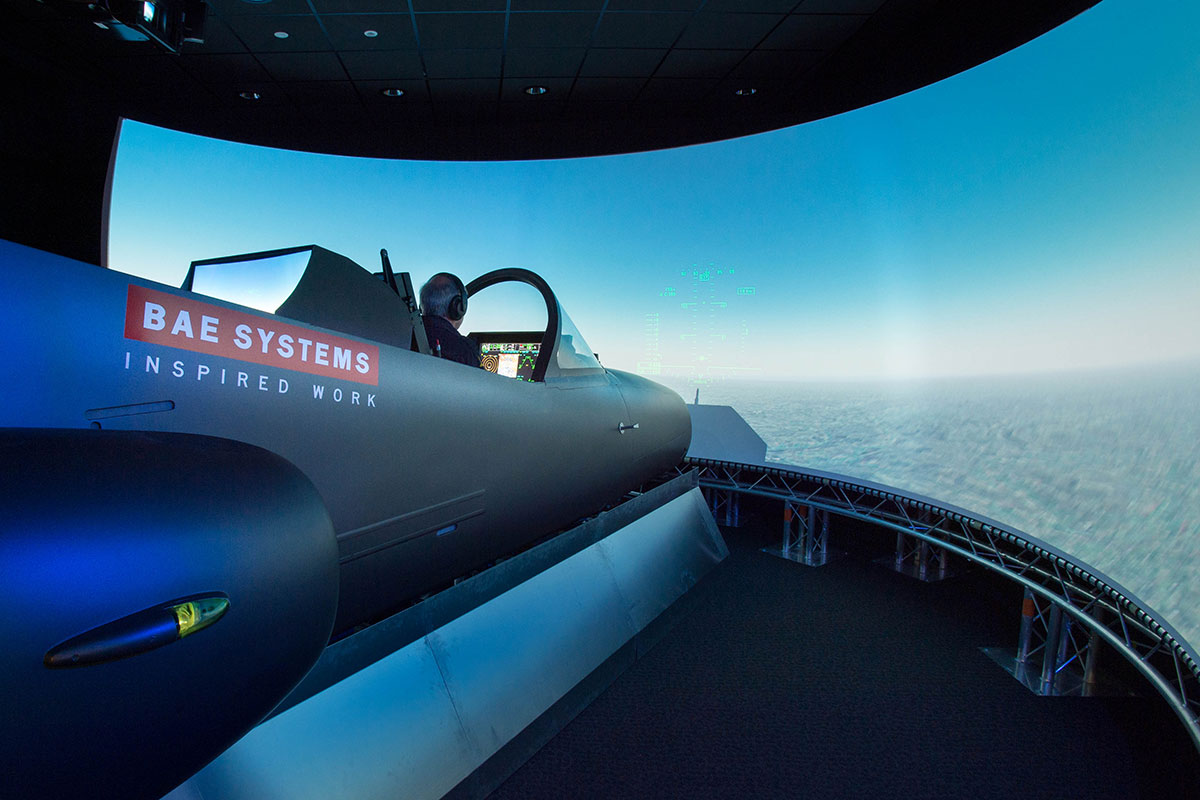 I’m in the cockpit of a Typhoon fighter jet. It’s an overwhelming sea of buttons, twiddly knobs and square screens displaying various diagrams and measurements.

Suddenly the whole scene dissolves in front of me. A few virtual screens hovering in mid-air have replaced everything. I can grab them, shift them around, and arrange them however I want. One of the screens is shaking – a very attention-grabbing way to ensure I quickly get important information from mission control.

This isn’t a real cockpit – yet. It’s a scene inside an Oculus Rift headset at the new Training and Simulation Integration Facility belonging to defence company BAE Systems. Here in Warton, UK, the firm is trying to design the fighter jets of 2040 and beyond – starting with the cockpit. “Cockpits are not flexible enough,” says Chris Hepburn, one of the company’s engineers, who is talking me through the demonstration.

Pilots’ helmets already have visors that augment their view with additional information. With a few modifications, they could replace instrument-panel displays altogether.

That wouldn’t just change the cockpit – it would change the experience of flying a plane. To illustrate, Hepburn presses a key and the floor falls away, leaving nothing between me and the ground thousands of metres below. At first it’s disconcerting, until I realise this is as close as I’ll ever get to flying Wonder Woman’s invisible jet. Hepburn tells me that this effect is simply a matter of overlaying the video from cameras under the plane.

It seems that to make the next great fighter jet, you start by working out what ideas you can pinch from the big consumer tech companies.

Read more: There is a good case to unleash job-killing AI on the high seas

“These companies have research budgets equivalent to nations,” says Mark Bowman, a former Royal Air Force pilot and now BAE’s head of flight operations. “If Microsoft can plough billions of dollars into their mixed reality glasses, HoloLens, we’d be foolish not to see if there are ways that we can use it.”

The burning question on my mind, though, is how the company can even consider replacing cockpit controls with a view of the landscape.

This is where Bowman disabuses me of my assumptions. It has been a long time since fighter pilots have been in control of the cockpit. In most jets, basic forms of artificial intelligence are already the co-pilot.

Exotic jets like the Eurofighter Typhoon are so manoeuvrable because they are engineered to be perpetually on the brink of losing control without ever actually doing so. Humans give the overall direction, but in a Typhoon for example, four computers calculate the best way to execute a move and vote among themselves before going ahead. Because all this happens in an imperceptible fraction of a second, the pilot retains the impression of having called all the shots. But if the pilot tried a manoeuvre that would stall the jet, they would find that the computers simply wouldn’t allow it.

Read more: We don’t need to lose out to machines, says the man who famously did

In future AI will play an even bigger role, from working out what information to show the pilot to taking full control of the plane. Bowman thinks that humans will be managers rather than being replaced. He envisions a human controlling a swarm of 20 drones while on board a plane being flown by AI.

Eventually, the pilot will probably be managed by a computer, too, something that happens very little at present. Defence companies are looking at ways of doing this using anything from eye tracking to brain-monitoring devices. “We want to see exactly how much information the pilot can deal with at any time and then use artificial intelligence to manage the cognitive load,” says Bowman.

Before I leave I take a Typhoon jet for an incredibly realistic spin around an aerial race course in rural Wales. Luckily, AI is my co-pilot.