Little Faith In the Jab: NSW Premier Says She Wouldn’t Want to Be Anywhere Near An Unvaccinated Person

New South Wales Premier, Gladys Berejiklian, has seemingly admitted she has little confidence in the vaccine’s ability to protect double-jabbed people from COVID-19.

The Premier suggested on Thursday that it would be “extremely careless and reckless” for fully vaccinated people to interact with unvaccinated friends and family due to the risk of catching or transmitting the virus.

Berejiklian said during a press conference: “It would be extremely careless and reckless if anybody welcomed someone who wasn’t–if you’re vaccinated–I, myself, would not want to be anywhere with someone who’s not vaccinated.

“That’s just my personal choice,” she added. “And people will make those personal choices. Some people who are fully vaccinated may not even feel comfortable participating in things at this level.”

Federal MP and United Australia Party leader, Craig Kelly, slammed the Premier’s remarks, calling them “the most despicable, contemptible and divisive statements of any Australian political leader in our nation’s history.”

Kelly said, “by seeking to divide us in such a way, she is betraying everything that Australia stands for and what the Anzacs fought for.”

According to ABC News, about 75 percent of people in NSW have had one dose of a COVID-19 vaccine, and more than 40 percent are fully inoculated.

“You have been warned,” Berejiklian threatened. “If you’re not vaccinated, come forward and get the vaccine, otherwise you won’t be able to participate in the many freedoms that people have at 70 percent vaccination.” 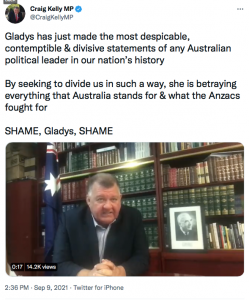 The aim, according to the Premier, is to ensure only vaccinated people are allowed to interact with each other when the state partially re-opens in mid-October.

NSW Premier Urges Employers to “Pressure” Unvaccinated Staff Into Getting the Jab: “No Jab, No Work”