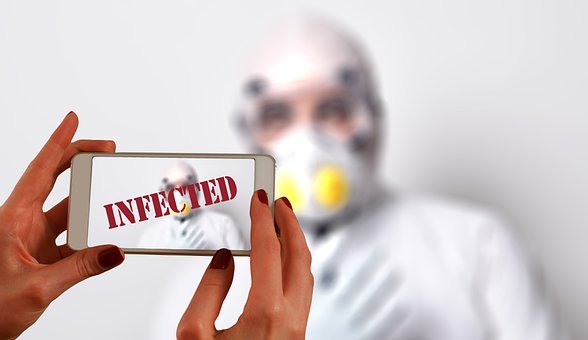 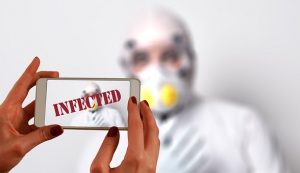 “But…but…this time it’s different. This one is different…”

“Yes, well…West Nile, SARS, Swine Flu, Ebola, Zika, MERS…every time one of these phonies reared its head, it was going to be different. Quantitatively and qualitatively different. And it wasn’t.”

Let’s all try fear as a lifestyle. How about an unproven virus blowing around the world? It could be a kick. Just turn on your TV.

The news is a huge deli.

Authoritative and supreme baloney sellers are cutting extra-thick slices for the public.

Zero Hedge: 3/8, “An infectious diseases expert at the forefront of the search for a coronavirus vaccine said on Friday that it was the most ‘frightening disease’ he’s ever encountered, and that ‘war is an appropriate analogy’ for what the country is facing, as ‘50 – 70 percent of the global population’ may become infected.”

“Dr. Richard Hatchett, who sat on the White House Homeland Security Council in 2005 – 2006 and was a principal author of the National Strategy for Pandemic Influenza Implementation Plan, and currently heads the Coalition for Epidemic Preparedness Innovations, told the UK’s Channel 4:”

“This is the most frightening disease I’ve ever encountered in my career, and that includes Ebola, it includes MERS, it includes SARS. And it’s frightening because of the combination of infectiousness and a lethality that appears to be manyfold higher than flu’.”

Let’s look at these “frightening diseases” Dr. Hatchett has encountered. Out of a population of seven BILLION people…

These are official figures. In my articles on past “epidemics,” I’ve presented evidence that factors having nothing to do with viruses caused illness and death; and the tests for diagnosing cases are wholly inadequate and unreliable. (archive here)

Dr. Hatchett also did work on the Swine Flu “pandemic” (2009). I’ve covered that fraud extensively. In the summer of 2009, while the CDC was claiming there were thousands of cases in America, star investigative CBS reporter, Sharyl Attkisson, discovered the CDC had secretly stopped counting cases. Why? Because the overwhelming percentage of samples taken from the most likely Swine Flu patients, sent to labs, were coming back with: no sign of Swine Flu or any other kind of flu. About a month after Attkisson’s investigation was shut down at CBS, the CDC estimated there were, yes, 22 MILLION CASES of Swine Flu in America.

Another expert is currently weighing in on the coronavirus: Harvard epidemiologist, Marc Lipsitch. He told CBS reporter Jim Axelrod that he predicts 40 to 70 percent of the world’s population may become “infected” with the virus, and millions of people will die.

This prediction, of course, is based on a computer model. What could possibly go awry? We should all step up to the counter and buy more baloney. The same brand the CDC was selling when they proclaimed there were 22 million cases of Swine Flu in America. Funny thing—every computer model I’ve ever bumped into always seemed to predict MORE. More of whatever it was calculating. I’ve never met a computer model that stated: “there will only be three of these, instead of 40 million.” “The projections of five years of drought have been downgraded to six days.”

There was an oddity in this CBS interview with the Harvard epidemiologist, Marc Lipsitch. It’s what both the reporter, Jim Axelrod, and Lipsitch didn’t ask or say. After all, when an expert tells you millions are going to die, you want to know more, right? Here is my proposed continuation of the conversation. It might go this way:

Axelrod: When you make a computer model, I assume it yields specifics, correct?

Lipsitch: Well, yes. That’s why we do models.

Axelrod: In this case, how many deaths—how many millions of deaths— from the coronavirus did your model predict?

Lipsitch: There is a range of numbers.

Axelrod: I understand. But you should understand that when you sit here and tell our audience that millions are going to die, there are further questions.

Lipsitch: The model adjusts the range, as we gather more information.

Axelrod: How many people will die? Our viewers, I believe, know there would be a difference between, say, two million, ten million, and a hundred million. When you just say millions, it leaves a hole…

And then, Axelrod would keep on going and find out how many millions of people Lipsitch thinks are going to die, based on the computer model.

In other words, let’s get the number or the range of numbers on the record. Let’s have the Harvard expert go all the way.

But for some reason, Axelrod and Lipsitch were satisfied to avoid doing it. Perhaps it was a case of “don’t frighten the children.” Unfortunately, too late for that. I prefer to think CBS and Lipsitch didn’t want to lift some very visible and specific roll of baloney and slice it thickly in front of the viewing audience. A year from now—speaking of millions—a whole lot of people might repost that interview and say: CAN YOU BELIEVE THIS? AND YOU TRUST CBS AND HARVARD? LOOK AT THE BALONEY.

The current soft meme, a white-collar corporate and government virus, spreading rapidly, is: “social distancing.” Also known, in a slightly harder version, as “self-isolation.” If you think you might sneeze in the next four months, work from home. Stay at home.

I thought we were already in the middle of a social distancing pandemic, judging from how many people walk down streets and sit in restaurants, heads bowed, looking at their cell phones and exercising their thumbs.

But if people listen to the experts, they’ll undoubtedly shrink and contract even further. They’ll live in kitchens and bathrooms, shut down the rest of their homes, and only venture out to buy food and toilet paper.

The intrepid hero of our time will be the pizza delivery Magellan, circumnavigating empty neighborhoods, braving the night air.