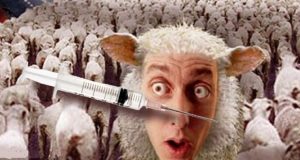 Here’s how it goes, Mr. Jones.

First, they told you the vaccine was your way out of the dark, out of the lockdowns. And if enough of you took the shot, the pandemic would be over.

So you lined up and took the jab. And you took the second dose.

On top of that, your viral load could be as high as the unvaccinated.

And voila, boosters would be necessary.

How many boosters? Unknown. Maybe one a year, or one every eight months.

If you take the boosters, would you still need to wear a mask and distance? Apparently, yes.

They keep claiming the vaccine will protect you against severe illness and hospitalization, but…the clinical trials of the three major vaccines were structured to show the shots would only prevent MILD ILLNESS. Chills and fever, or a cough. They still haven’t told you THAT.

Let’s see, what else? Do you watch football? This past weekend, as college and NFL games swung into action, HUGE CROWDS of unmasked spectators filled the stands all over the country.

Do you really think officials vetted those people, to make sure they had vaccine passports before they entered the stadiums? Are you kidding?

So how do you like THAT? You’re acting like a good little sheep, you took your shots, but millions of people were attending football games, shouting and screaming, sitting cheek to jowl, with no masks on.

Droves of immigrants are streaming across the southern border of the US, and most of them aren’t are getting vaccinated. They’re being relocated to cities and towns from San Diego to Bangor.

And don’t forget, the number of reports of injuries and deaths from the vaccine is staggering. The experts admit they have no idea about the vaccine’s long-term effects.

Officials in some parts of the country are laying on new lockdowns. There’s no way to predict when such imprisonments might pop up in your area.

You thought that by taking the vaccine, you’d earn special privilege. You’d wear your badge with pride. But no.

You thought being vaccinated meant you wouldn’t catch the disease. But no.

You scoffed at the idea that the whole pandemic was a hoax, and you were sure there was no evidence that contradicted what the experts were telling you.

You chose not to look into the fact that no one has actually proved the virus exists, or that the test is meaningful, or that the case and death numbers are real. You assumed taking the vaccine would solve all your problems for you.

You’ve chosen to ignore the destruction of freedom by vaccine mandate, by lockdown, by devastating financial ruin for millions of people. You’ve kept your mouth shut. You’ve settled for protection by obeying the rules and taking the shot in the arm.

A curtain of lies has been raised all over the world. The fraud is awesome. The fear is mindless.

You sided with the wrong people. They are promoting an absurd religion of ceremony and ritual. “First you do this, to protect yourself. Then you do that. Then, the third step is this. Then you’ll be blessed. But actually there are more steps, and if you take them, you may or may not be protected…”

These priests keep telling you they’re changing their minds about what is necessary because new data are emerging—and you believe them. You believe they and you are following science. It still hasn’t dawned on you that all this is about CONTROL.

You’re on the Tyranny Train, and with each mile the enveloping power of our so-called leaders tightens around you. You don’t want to know what the Great Reset or the New Normal means. You think somehow everything will stay the same, even though the evidence in front of your eyes is presenting you with real-life denials of what you think at every turn.

How did you get to be the way you are, Mr. Jones?

There are MANY answers to that question. Here is one:

Creating ADHD is the goal of education.

There is a form of mind control that is really mind-chaos. It shatters the processes of thought into, at best, vaguely related fragments. There is no direction, no development, no progress along a line of reasoning. This is how you disable a person. You disrupt his ability to move from A to B to C. At that point, he becomes passive. He’s willing to be programmed, because it’s easier. He wants to be programmed.

“I learned twenty-four new things today at school,” the child said. “One right after the other. I felt so happy. My teacher told me I was learning accelerated. I wrote on my iPad. I saw pictures. I did group harmony. I added. I divided. I heard about architecture. The teacher said we were filled with wonder at the universe. We solved a problem. We were all together. I ate cheese. A factory makes cheese.”

The new education is ADHD.

It’s a method of teaching that surrenders ground on each key concept, deserting it before it’s firmly fixed in the mind of the student.

It hops around from idea to idea, because parents, teachers, administrators, students, departments of education, and educational publishers have given up on the traditional practice of repetition.

Repetition was old-world. For decades, even centuries, the time-honored method of instruction was: introduce an idea or concept or method, and then provide numerous examples the student had to practice, solve, and demonstrate with proficiency.

There was no getting around it. If the student balked, he failed.

There were no excuses or fairy tales floated to explain away the inability of the student to carry out the work.

Now, these days, if you want to induce ADHD, teach a course in which each new concept is given short shrift. Then pass every student on to the next grade, because it’s “humane.”

Think of it this way. Suppose you want to climb the sheer face of a high rock. You know nothing about climbing. You engage an instructor. He teaches you a little bit about ropes and spikes and handholds. He briefly highlights each aspect and then skips to the next.

So later…while you’re falling five hundred feet to the ravine below, you can invent stories about why the experiment didn’t work out.

Since the advent of organized education on the planet, there has been one way of teaching young children…until recently. Explain a new idea, produce scores of examples of that idea, and get the students to work on those examples and come up with the right answers.

For the last hundred years or so, however, we’ve seen the gradual intrusion of Teacher ADHD.

And no matter how many fantasies educators spin, schools can’t replace parents.

If what I’m writing here seems cruel and uncaring…look at the other side of the picture. Look at what happens when a student emerges from school with a half-baked, dumbed-down education.

He can sort of read. He can sort of write. He sort of understands arithmetic. He tries to skate through the rest of his life. He fakes it. He adopts a front to conceal the large territory of what he doesn’t know.

He certainly can’t think straight. Give him three ideas in succession and he’s lost. He goes on overload.

He operates on association. You say A and he goes to G right away. You go back to A and he responds with R. He’s up the creek without a paddle.

Forty years ago, I was on the verge of landing a lucrative job with a remedial education company. The owner gave me a lesson plan and told me to write a sample “computer” program.

I did. He looked at it and said, “There are too many examples and exercises here. You have to move things along faster.”

I told him the students would never comprehend the program that way. They had to work on at least 20 exercises for each new concept.

“Oh,” I said, “you mean now the student and teacher both fake it?”

And that was the end of that.

Several years ago, I explained teacher-induced ADHD to a sociologist at a US university. His response: “Children are different now. They don’t have patience. There are too many distractions. We have to operate from a new psychology.”

I asked him what that psychology was.

“Children are consumers. They pick and choose.”

I know how the Carnegie and Rockefeller Foundations torpedoed education in America. They cut off teachers and students from the history of the nation and the meaning of individual freedom.

What I’m talking about here is a different perversion. The unhinging of the young mind from any semblance of accomplishment and continuity. This goes far beyond the agenda of outfitting children to be worker-drones in a controlled society.

This is the induction of confusion and despair about what used to be called thinking. This is the imprinting of “gaps” that make it very hard for a person to operate, even as a drone.

In addition, if you seed children with all sorts of debilitating psychiatric drugs, you have a profound and dangerous mess that only dedicated parents can undo, one child at a time.

People may wish it weren’t so, but that doesn’t change the facts of the matter.

The upside is, when you explain a concept to a child, and you then take him through many exercises designed to help him understand that concept, he’ll achieve a victory.

Then you’ll see the lights go on in his mind.

And when education also includes getting children to use their imaginations broadly and widely and often—and you need a certain kind of teacher to accomplish THAT—you have independent, strong, adventurous, creative people, who aren’t controlled.

They don’t board other people’s trains and ride them to nowhere.