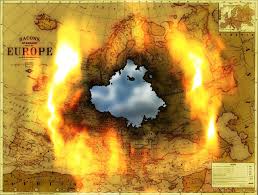 Tommy Robinson is a journalist for The Rebel Media and the author of an autobiography, called “Enemy of the State”. We interview him about his new book: “Mohammed’s Koran: Why Muslims Kill For Islam”, co-authored by Peter McLoughlin.

VoE: Your social media accounts have exploded, you’ve became a reporter for the Rebel and you have a family: where did you find the time to write a book?

Robinson: As you probably know, the British state stitched me up and sent me to prison. Confined to a cell (in conditions in which they wouldn’t have put a Muslim terrorist) gave me plenty of time to read the Koran. But before that, in the early days of the English Defence League, we had many well-informed apostates telling us the ins and outs of Islam. And Peter is a good researcher and an imaginative thinker, so between the two of us we managed to come up with a revolutionary way to explain the Koran to ordinary people. My wife and kids don’t get nearly enough time with me, but I try to juggle many different demands. My book “Enemy of the State” shows just how hard it is for me to live a normal family life.

We ended up producing a truly revolutionary approach to the Koran.

VoE: What was your motivation to write this book?

Robinson: We could see that there were dozens and dozens of really great books on Islam around, so for years it seemed to us that there was no angle that others had missed. But as we looked back on many years of debates which failed to explain what was going on with Islam and terrorism, we realised that the key intervention was to focus on the Koran. In debate Muslims would claim they rejected the barbarities found in books on Sharia law or the hadiths. But they would never reject what was found in the Koran. Because the Koran was turgid, verbose and shapeless (Winston Churchill’s words), Muslims and their quisling allies could find some passage that seemed to reject violence, and in this way they could deceive the public in debate. Debates on why Muslims killed for Islam would just go round in circles, with politicians, academics, clergy and journalists doing nothing to help the public grasp this civilizational threat. So what was needed was to prove that any such supposedly peaceful verses were cancelled by later violent commands from “Allah”.

But now we were looking at trying to get the public to understand Koranic scholarship, which is a tall order (even we’d rather we never had to learn anything about Koranic scholarship). We knew it was a matter of life and death for us to get through to the very people who would have the least interest in this boring subject. We concluded that it all came down to presentation – the only way this would work is if we got the presentation right. We knew ourselves how confusing it was to look at tables cross-comparing the standard order of Koranic verses with tables where the verses were put in chronological order. We also knew that books on abrogation were few and far between, and even then the key text on this subject was in itself challenging to understand when someone managed to find it.

So, we knew we had to take what was an accepted, mainstream translation of the Koran and present the proper chronology and all the instances of abrogation in the clearest possible way. And we had to pull out from the thousands of verses those verses which are of most importance to non-Muslims. Finally, we decided to highlight just how obsessed Islam is with unbelief and unbelievers. We ended up producing a truly revolutionary approach to the Koran. Whilst there have been chronological Korans before (as we prove in the Introduction, these books became concealed as the West started to import Islam). No scholar has ever put the final words of Mohammed first, no scholar has ever crossed-out all the abrogated verses. Within five minutes of looking at this Koran the ordinary citizen can see that why Muslims find the Koran an inspiration for terrorists. Anyone who is given some “peaceful” verse from the Koran can look it up in our book and see immediately if all or even part of that verse has been cancelled by later commands to violence.

As George Orwell says in his book 1984, if there’s any hope it will come from the working class.

VoE: Do you think this book can change anything (and why)?

Robinson: As George Orwell says in his book 1984, if there’s any hope it will come from the working class. Many people think the problem is that politicians and journalists are ignorant about the doctrines and history of Islam. We needed to prove that it was not possible for people to be ignorant who have hundreds of staff and the best education that money can buy. We could see that all the evidence showed that for more than 150 years the educated elite have known what Islam is. We could also see that their only response to jihadi terrorism was to give our countries more Islam. So we wanted a book that would speak to the ordinary voter, proving in the strongest possible way what Islam is and making ordinary people realise they cannot leave this problem to the elite to sort out – because all the evidence shows the elite are clearly in the process of Islamizing the West.
We did test runs before the book was published, where it would be given out in batches in ordinary towns, and then key people would feed back to us how the public reacted to the book. Based on that information, the book was adapted to try and make it appeal to the widest possible readership. But even more importantly, we were told months later that these books were still circulating in these towns, with ordinary people actively seeking out a copy of this book on the Koran. Even before the book went on sale this gave us hope that the presentation worked.

That Introduction to Mohammed’s Koran exists to prove to the ordinary citizen that the elite are on the side of Islam not on the side of non-Muslims. These quislings in power in the UK, Germany, France, etc. won’t be removed from power until most of an electorate is left in no doubt that the jihadis are the shock troops of Islam, and that what Muslims are doing is what Islam has always done. The front cover of Mohammed’s Koran bears a verse from the Koran explaining why the jihadis are the shock troops. The back cover of the book bears a verse from the Koran explaining why the behaviour of “moderate Muslims” is also part of the battle plan of Islam. The entire ideology of Islam is rotten to the core, and like national socialism and communism it has to be exposed for what it is, before it is too late. Our book was designed to be a taken down to the pub to be discussed among friends. If ordinary people don’t look out for the future of their children and grandchildren the politicians absolutely will not.

The first print run of Mohammed’s Koran went straight to No.1 at Amazon and stayed there until it sold out just 4 days later. It is probably unheard of in the publishing industry for a book on theology to go to No.1 like that. But even though it is my second best-seller, the quisling media did not even report this. So the public’s response to the book gives us hope. Weeks since it was launched, with no PR campaign and no advertising, this book on Koranic scholarship is still in the top 100 books. The public want to understand why every time Muslims kill our people for Islam, our politicians go on TV to lie to us that “Islam is a religion of peace”. That contradiction has not escaped the public’s notice.

All the indicators are that children born now in Western countries will live out their days under the rule of Muslims.

VoE: How do you look at the future of the UK and Europe?

Robinson: The future is bleak unless we can wake up the masses. Already in 2004 and 2006 Professor Lewis — the West’s 20th century expert on Islam — was predicting (probably with a heavy heart) that by the end of this century the whole of Europe will have fallen to Islam. There are many books pointing out that demography is destiny, but even if these books did not exist it’s twenty years since the UN published their plans for “replacement migration” in the West. All the indicators are that children born now in Western countries will live out their days under the rule of Muslims.

We have no more than a couple of decades to bring about a democratic revolution and remove these quisling elites from power. If we don’t use what limited freedom of speech and limited democracy we have to remove them, then we shouldn’t complain when Muslims do come to power and impose Sharia law on us, as professor Lewis predicted. If we fail to speak out and fail to use our votes, then Europe will probably descend into civil war as Muslims increase their violent assault on our freedoms. Already the senior politicians in countries such as France have warned of a coming civil war. That France has been under a state of emergency for years, shows that we are already in the early stages of this civil war. We now see that the globalist corporations (Google, Facebook, Twitter, etc.) are willingly implementing policies imposing political correctness and restricting freedom of speech. The alliance of big business and governments to restrict freedom of speech to control populations is the very essence of Fascism.

VoE: Any ideas about a next book?

Robinson: We’re kicking round other ideas of ways to wake up the general public. This book isn’t the last shout. We’re looking at subjects that will demonstrate how governments will sacrifice their citizens to Islam. Something along the lines of what Peter did with “Easy Meat”, his book on the 30 year cover-up by the British state of Muslim gangs who rape and prostitute English schoolgirls on an industrial scale.

VoE: Where can people buy your book?

Robinson: Mohammed’s Koran is available at Amazon sites, where there are many great reviews of the book (within three weeks of the book being available to buy, Amazon’s UK site contained hundreds of 5 star reviews).

But the book is also available at Amazon’s Indian, German, French, etc. sites. People can just search using the words “Mohammed’s Koran” and they should find links where they can buy the book.

Soon there will be a website online with a huge amount of supplementary material related to the book. We are determined to make sure that the Western world understands what Islam is like, just as 50 years ago people in the West knew what Islam was like. Sadly we don’t have 50 years in which to undo the deliberate deception of the public.

One thought on “Tommy Robinson interview: ‘The elite are clearly in the process of Islamizing the West.’”