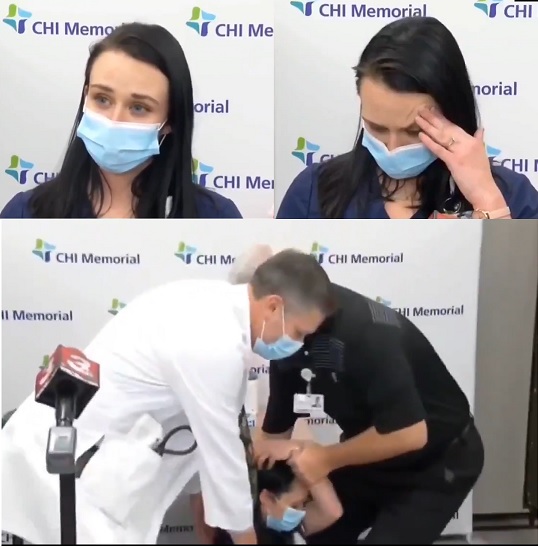 This report is directly from the CDC and was published yesterday, December 19, 2020.

If the staffing issues and overcrowding at hospitals across the U.S. were being over-exaggerated in the Pharma-controlled corporate media in recent weeks to instill fear over COVID to the public, that is all about to change as the next phase of the experimental COVID vaccine trials is being conducted on the American public, starting with healthcare workers this past week.

Because according to this CDC report, the healthcare system just lost over 3000 staff due to the experimental COVID vaccine, and not COVID itself.

Using healthcare workers as the first human lab rats in the public was obviously planned from the start. Those trained in the dogma of the pharmaceutical industry, at least many of them, were able to roll up their sleeves and get this experimental vaccine and be convinced that the side effects are “normal” and for the “greater good,” because that is what their training has taught them.

This will also lead to REAL hospital over-crowding as more and more of these healthcare workers will not be able to show up for work next week, and probably the weeks ahead, and the pharma-controlled corporate media will spin this as being due to the rising “cases” of COVID to convince the general public to line up and get this vaccine.

And the dumbed-down American public who actually trust the pharma-owned and controlled corporate media seem to be falling for the deception, based on comments we have received here at Health Impact News as we report these events.

For example, we published the video of the press conference in Chattanooga, Tennessee earlier this week where Nurse Manager Tiffany Dover passed out live on camera just after she was vaccinated with the Pfizer COVID experimental vaccine.

The doctors at CHI Memorial Hospital, and the nurse herself, tried to reassure the public that her passing out had nothing at all to do with the vaccine she had just received, and apparently most of the public is buying it, based on comments we received, like this one:

My mom made me watch this video. All of you here are misled and make yourselves look incredibly dumb. You guys are really taking this site as a credible news source? Listen to healthcare officials! Listen to the cdc and who! Wear your mask!!!!!! Get the vaccine!!!!!!! At the very least stay home and quarentine!!!!! It’s partially because of your noncompliance and uneducated propaganda that this country is in the state it is in compared to the rest of the world.

Where you get your information right now is a matter of life and death, literally, and threats of the government seizing websites such as Health Impact News and others who dare to publish the truth about the corruption in the Pharmaceutical industry and government are still hanging over us, and could be implemented at any time now, as they seek to roll out this vaccine to the general public after they significantly reduce the hospital staffs across the country.

Next up will be seniors in assisted living institutions, probably beginning this week, and most of them have co-morbidity conditions with weakened immune systems and are pumped full of toxic pharmaceutical drugs.

This will be a literal holocaust, and be far worse than the tens of thousands of seniors who died when COVID started!

The other disturbing aspect of the CDC report published yesterday is that there were 514 healthcare workers pregnant that received the first round of Pfizer’s experimental vaccine.

As we have reported, the U.K. is not recommending pregnant women get this vaccine, but no such warning exists in the FDA guidelines for the U.S.

This is the eugenics agenda for the New World Order called “The Great Reset” being implemented right before you very eyes! Stop watching the pharma-owned and controlled corporate media news, and start taking precautions to RESIST their agenda to reduce the world’s population and setup their New World Order!

This is not a “conspiracy theory” anymore!! It is the stated goal of the Globalists like Bill Gates, it has been published, and now it is being implemented right before your very eyes as The Great Reset.

If you have not yet listened to the warning from doctors and healthcare professionals who are not onboard with this eugenics program which represents literally TENS OF THOUSANDS of doctors around the world trying to sound the alarm on these experimental COVID vaccines, please watch and listen now and pass this on because these doctors are being censored and attacked:

Several readers have emailed us asking where to find this report. It was published by The Epoch Times in their article here, and they state:

The information was presented on Dec. 19 by Dr. Thomas Clark, a CDC epidemiologist, to the Advisory Committee on Immunization Practices, an independent panel that provides recommendations to the agency.

We are not aware of the report being posted on either the CDC website, or the ACIP website. Epoch Times was apparently able to obtain a copy of the report from one of their sources.

A reader below in the comments found the report on the CDC website here: https://www.cdc.gov/vaccines/acip/meetings/downloads/slides-2020-12/slides-12-19/05-COVID-CLARK.pdf

WARNING! Seniors and Healthcare Workers First in Line to Get the Experimental COVID Vaccine!