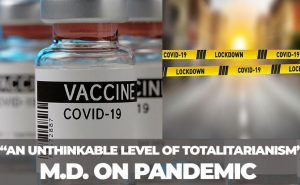 READ MORE AT LIFE SITE NEWS
A medical doctor is speaking out against the ‘collusion’ between authorities and tech corporations targeting doctors and scientists who dissent from current COVID policies.

ifeSiteNews is facing increasing censorship. Click HERE to sign up to receive emails when we add to our video library.

January 18, 2021 (LifeSiteNews) – Following a September 2020 interview with LifeSite’s Jim hale, Dr. Leland Stillman this time speaks out against the “dark collusion of government actors … and corporations,” which is stifling dissent among medical doctors and scientists, as it pertains to pandemic policies.

Back in September, the young doctor had spoken out against forced vaccinations. Stillman had noted that a COVID-19 vaccine must not be made mandatory, and that forcing people to inject it only “serves certain special interests.”

In this new interview, he noted how several doctors are even being targeted and punished financially and personally if they do not obey the COVID “orthodoxy” of the medical and government authorities. Stillman described this suppression of dissent in the medical community as reaching “a level of totalitarianism that even Orwell and Huxley would have struggled to envision.”

Also, the young doctor connected the dots on this “dark collusion” between government officials, medical authorities, and tech corporations, tying in the massive censorship in recent months.

Especially with the lack of social connections and foot traffic due to lockdowns, small businesses and even individuals face a very serious threat of disappearing.

“If Google or Amazon can de-platform you, or if Shopify can shut down your online store front, then all of a sudden you could see just about everyone in society disappear from the public eye overnight, because they have an opinion that may contradict what the mainstream media narrative is.”

Moreover, Stillman said that throughout his entire education and experience as a medical doctor, the notion of lockdowns to solve a pandemic crisis was never a factor. “No one before COVID, that I know of, seriously considered lockdowns to be effective,” he stated.

He noted that quarantines were an old practice from the plague that was considered outdated, but that lockdowns come from prisons. Lockdowns are a punishment method in prisons, not a medical method of containing a disease.

Lastly, Stillman highlighted the distrust the public has towards policies executed by authorities, and how the pandemic has brought it to the light. He described a “division in American society between people who want to listen to a certain group of experts, who are not the experts,” and those who wish to dissent from those opinions.