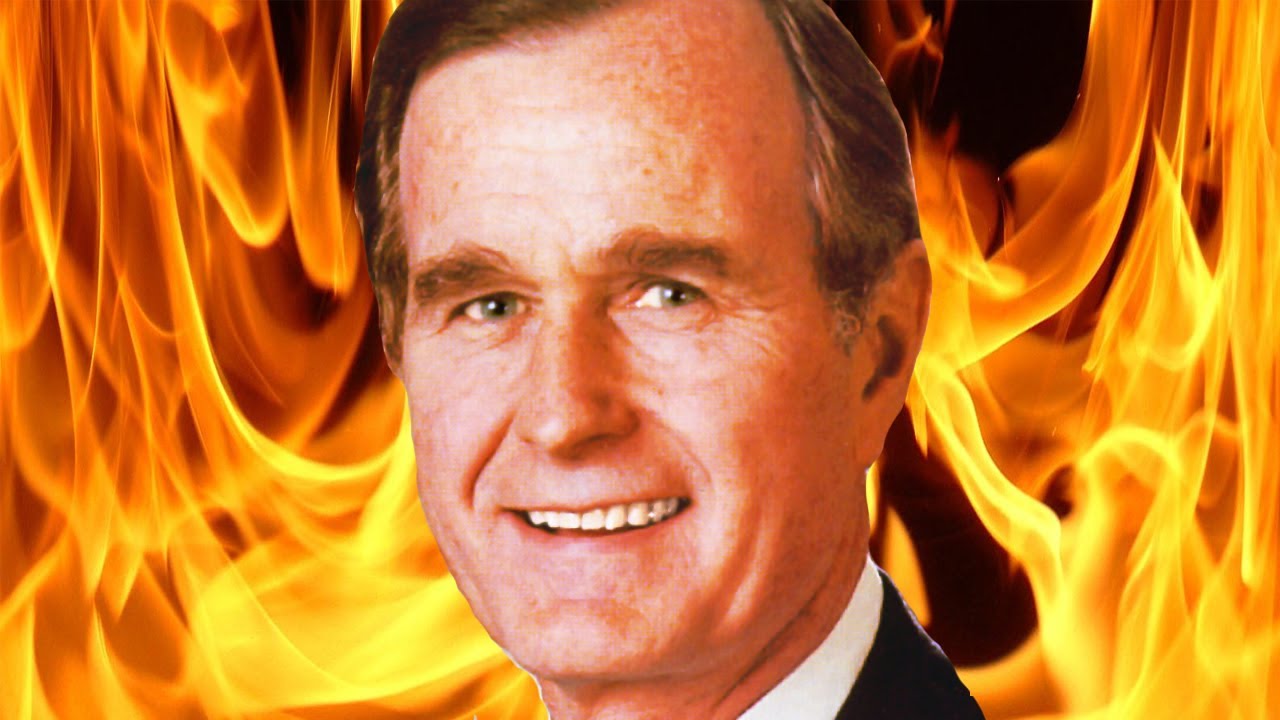 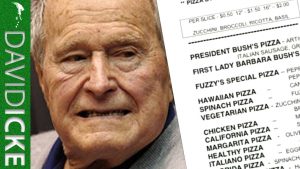 …I cannot fully escape the regret I feel that another bloodline family member who has perpetrated great and horrific crimes against humanity has moved on without having to make himself accountable to the world, and in the process reveal the means and motives of the bloodline family rule of the planet to enable humanity to fully liberate itself from it.

…The incongruity between the lavish honor and praise ubiquitously delivered through mainstream media and the harrowing accounts I’ve heard and read about George H. W. Bush’s cruel Satanic practices drew me to this video interview clip with David Icke, where he explains that there are a number of reasons why we need to look at and expose the practices of the man he calls ‘Father Bush’.

Father Bush High Up The Ladder

David Icke puts George H. W. Bush, who died at age 94, in a category with others high up in the ranks of the ruling bloodline families , aligned with their darkest practices, such as drinking the adrenalized blood of tortured children to lengthen their own lives:

George H. W. Bush — Another “elite” that got away with it
“These people always seem to live long lives, don’t they, the Kissingers, and the Father Bushes, and the David Rockefellers, and the Queen Mother in England, who lived to a hundred and two, and the Queen of England, now, is well of age, because they’re not given the same treatment, health treatment, the rest of us get, one of the bloody reasons, and also the other things that they do which is very dark, satanic, and to do with the energy of children.”

More on the treatment of children later. But important to note that G. H. W. Bush’s testimony would have been invaluable because he was higher up the bloodline rank than most other high profile public servants who belong to this group, like Barack Obama or his son George W. Bush.

In fact, David Wilcock recounts a story he heard from multiple sources that when Barack Obama had been sworn into office, he had a meeting with all the past presidents, and then a private 30 minute sit-down with Father Bush, who called him a ‘n*gger’ and warned him that he was to follow what the ruling elite told him to do or else his wife and daughters would be brutally raped and killed.

George H. W. Bush seemed to be a kingpin in the Deep State and publicly made great strides in advancing the New World Order agenda, actually being the one who popularized the phrase, while privately pulling important strings to advance the Deep State agenda, like helping to align the CIA with the globalist plan during his time as CIA Director and having a hand early on in the assassination of John F. Kennedy. (More on the subject HERE).

David Icke says he would have liked to interrogate Bush not only for his political role in trying to enslave humanity as a whole, but perhaps more importantly for his dark, hidden practices as well.

“Father George Bush is such a classic purveyor of this madness, this insanity that they want to impose on the world, and as presidents go, he’s a bit higher up the ladder, than say his son, or some of the others, and I would want to confront him with, not just questions about his role through the years in so many things, because coming from a bloodline family, he would have been brought, from birth, he would be developed to be in the positions that he was in, head of the CIA, and vice-president, president and all these other things that he was involved in.

“But there’s another area of Father George Bush, which is something that a lot of conspiracy research doesn’t cover, but really needs to, and that is pedophilia. It’s a deep rabbit hole, but when you connect the dots, you can explain why the ratio of pedophiles to positions of power, especially in the higher levels, is fantastic compared with the ratio of pedophiles in the general population.”

CIA Whistleblower: Exposing the Roles of the CIA, Bushs and Rockefellers in the Global Sex Trafficking of Children

The Torture Of Children

In the video interview David Icke does not go too much into the evidence regarding the crimes of Bush Sr., which he says is discussed in much greater detail in his books and full lectures,  though he does point out that he has had firsthand witness testimony of what Bush Sr. has done:

“And I’ve met some of the adults that he abused as children and survived, and they are absolutely scrambled mentally, emotionally, and physically, because of the horrors that this man put them through.

“Now there’s a number of reasons, Luke, why we need to look at this, and expose this, first of all to stop the kids having this done to them, but also to let people to see into the minds and the mentality of those who are behind this global conspiracy.”

David Icke exposed these “elite” bloodlines in his amazing book, The Biggest Secret: The Book That Will Change the World.

You can watch the interview here:

Icke goes on to discuss how the reason one would want to interrogate Bush is to come to understand why members of the elite ruling bloodline families behave the way they do. And the key point is to understand their complete lack of empathy. Icke says “there is something about their genetics which has deleted empathy. It’s deleted the ability to feel the consequences, for others, of your actions.”

Because our own empathy is so central to our understanding of human life, it is not surprising that many good, kind, well-adjusted people simply cannot fathom that there are people in high places putting children through excruciating torture through sexual abuse as well as ritual sacrifice.

And because so many cannot fathom it, and might not be willing to even consider it, exposing it has been a slow, piecemeal process while these practices continue to happen in our world.

The truth is, Illuminati Satanists Rule the World, Not Politicians, Bankers or Military Heads

If we can imagine that from birth, members of these bloodline families are themselves put through ritual abuse and mind-control processes from when they are very young to completely sever their empathy for other human beings, and essentially live in a state of dissociative fear where their only satisfaction is personal power, wealth, and control over others, then it becomes possible to come to grips with what is really going on at the highest levels of power in the world.

While George H. W. Bush is no longer around to reveal the tale of his transgressions, there is still a multitude of opportunities for us to uncover not only the extent of his crimes, but the big picture they help to reveal about bloodline family rule on our planet.

The Evidence: I’ve been asked on Facebook if there is evidence for these claims

1. You can start with this banned Discovery Channel documentary, Conspiracy of Silence, where he was accused of child trafficking for political elites:

3. You can then continue to the testimony of CIA whistleblower Dr Sue Arrigo who names George Bush Sr. as top child trafficker, heavily involved in MK-Ultra (while he was the head of CIA), child rapist and child murderer: READ HERE.

4. You can then investigate the claims of MK-Ultra victims Cathy O’Brien and Arizona Wilder who both said George Bush Sr. was a pedophile and central figure in child trafficking.


6. You can then investigate the “milder” allegations brought against him in the mainstream media by some 10 people so far (2 actors) who accused him of groping them (this is consistent with the actions of a sexual predator who is used to do much worse and get away with it): Vox.com and Theguardian.com

7. And let’s not forget that the CIA was caught trafficking drugs into the US during his Vice Presidency. George Bush Sr. was accused of being at the heart of the drug smuggling operations, together with then Governor of Arkansas, Bill Clinton. Both of them went on to become Presidents of the USA.

Reporter: Is the CIA involved in drug trafficking?
Ron Paul: I think George Bush is deep into it.

2 thoughts on “Why George Bush Sr. Should Have Been Indicted Before He Died (Child Sex & Drug Trafficking)”