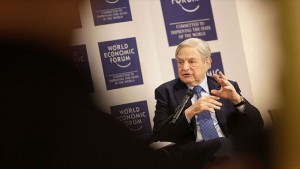 The billionaire has already spent or pledged $13 million to help Hillary Clinton and other Democrats this year.

Soros has spent or committed more than $13 million to support Hillary Clinton and other Democrats this election cycle, already more than his total disclosed spending in the last two presidential elections combined.

Soros has expressed alarm over the past few months at the candidacies of Republicans Donald Trump and Ted Cruz. In a statement last week about a new group he’s funding to increase voting by Latinos and immigrants in the election, he again mentioned the two candidates by name.

“The intense anti-immigrant and anti-Muslim rhetoric that has been fueled by the Republican primary is deeply offensive,” Soros said in the statement. “There should be consequences for the outrageous statements and proposals that we’ve regularly heard from candidates Trump and Cruz.”

Michael Vachon, a spokesman and political adviser to Soros, said there was no single cause for the increase in spending. “His support of Clinton is one reason. The tone of the other candidates is the other,” Vachon said. The Clinton, Cruz and Trump campaigns, which face crucial primary contests in Ohio and Florida today, didn’t respond to requests for comment.

Soros’s importance to Clinton goes beyond the checks he writes, since other major Democratic donors sometimes follow his lead. At the same time, it’s likely that in a general election, Trump would pillory Clinton for her reliance on Soros and other wealthy hedge-fund managers. The billionaire real-estate developer has spent months portraying his Republican rivals as the tools of their donors.

Soros, 85, a Hungarian-born speculator who made billions betting on price swings in currencies and other assets, has long been one of the right wing’s favorite bogeymen and a magnet for conspiracy theories.

Last weekend, some Trump supporters and conservative media organizations blamedSoros for demonstrations in Chicago that caused Trump to cancel a planned rally, pointing to his past support for one of the groups that organized protests, MoveOn.org. In fact, MoveOn hasn’t gotten funding from Soros since 2004, according to both Vachon and MoveOn spokesman Brian Stewart.

Soros’s personal fortune stands at about $24 billion, according to the Bloomberg Billionaires Index. Soros handed off day-to-day management of his hedge fund business in the late 1980’s to focus on his charitable pursuits, many of which seek to promote democracy around the world. The Open Society Foundations say they have spent some $13 billion over the past three decades.

Soros spent an unprecedented $27 million trying to defeat Bush’s re-election in 2004, much of it through independent groups known as 527s that could accept donations of unlimited size. While the groups Soros funded knocked on doors and tried to boost voter turnout, a conservative 527 group aired a powerful series of ads questioning Democrat John Kerry’s war record, helping Bush win a second term. “They were in-your-face distortions of the truth,” a frustrated Soros told the New York Times Magazine in 2006. “People don’t care about the truth.”

Soros signed on as an early backer of Obama during the 2008 campaign, but spent only about $5 million on political causes that cycle, according to a tally by Bloomberg that doesn’t include undisclosed donations to political nonprofits. He spent even less in 2012, even though the Supreme Court’s Citizens United ruling prompted a flood of new seven-figure contributions that year.

At the World Economic Forum in Davos, Switzerland that January, he remarked to Reuters that some hard-right candidates would provide a big contrast with Obama but “there isn’t all that much difference” between the president and Mitt Romney, the eventual Republican nominee. He also remarked that “a lot of the talent has left” Obama’s administration.

A few months later, Soros told a Clinton confidant that he wished he hadn’t backed Obama in the primary four years earlier.

“He said he’s been impressed that he can always call/meet with you on an issue of policy and he hasn’t met with the president ever,” Neera Tanden said in a 2012 e-mail to Clinton, who was then serving as Obama’s Secretary of State. “He regretted his decision in the primary — he likes to admit mistakes when he makes them and that was one of them.”

The e-mail was one of thousands of Clinton’s messages that the State Department later made public, several of which show what a warm reception Soros got from her office. They show him planning a meeting with Clinton to request funding for a university he supports; recommending a few names of potential mediators for a crisis in Albania; and having a long talk with one of her aides about the situation in Burma. Over the past few years, Soros’ charities have given between $1.5 million and $6 million to the Clinton Foundation.

Soros’s biggest contribution this year is a total of $7 million to Priorities USA, the main super-PAC supporting Clinton. Another $1 million went to American Bridge, an opposition-research group. And last week, he announced he was putting $5 million into a new super-PAC known as Immigrant Voters Win. The group is part of a coordinated $15 million voter-turnout effort, first reported in the New York Times, that is targeting Latinos and immigrants in Colorado, Nevada and Florida.

The $13 million total puts Soros near the top of the list of this election cycle’s biggest donors, and it doesn’t include the $5 million he’s pledged to another effort, led by Democratic lawyer Marc Elias, to challenge new voter-identification laws and other restrictions at the state level.

In an era of super-PACs, Soros’s giving doesn’t stand out like it used to. Thomas Steyer, the former San Francisco hedge-fund manager, spent more than $70 million in 2014, and the casino mogul Sheldon Adelson gave more than $90 million in 2012.

At Davos in January, Soros remarked that Trump and Cruz are engaging in “fear mongering.” But he predicted that neither of them would prevail in the November election. “Here I have to confess to a little bit of bias, so take that into account,” he told Bloomberg Television. “I think it’s going to lead to a landslide for Hillary Clinton.”