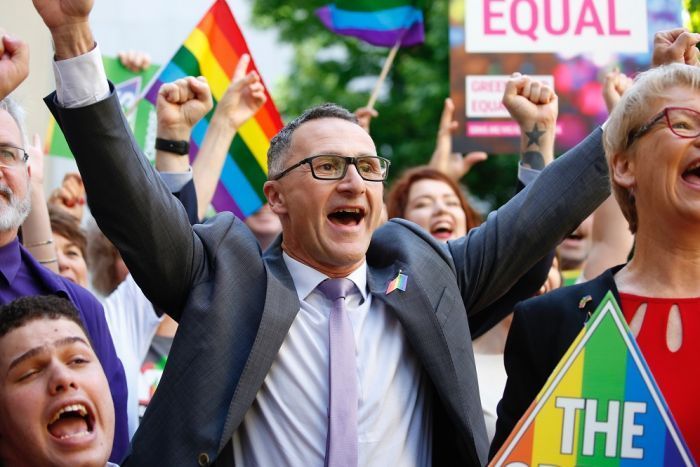 Australians, you have been duped. You have allowed the Government to remove Gender from the cornerstones of our society. What we were really voting for was‘Transgender’ Marriage and therefore ‘Transgender’ sexuality education. The push to force Gender Theory into schools has been forceful and relentless since the redefinition of marriage.

During last year’s Plebiscite to redefine marriage, thousands of LGBT people joined the chorus to make their relationships ‘Government Official.’ Little did they know, they were all being used as pawns by Elites who knew something they didn’t – It was never about marriage.

New stats reveal that LGBTQ people are not getting married and most never intended to. The ABC promised a billion dollar injection into the economy as a direct result of redefining marriage. That target is laughable now.

Safe Schools co-founder, Roz Ward lamented at a Marxist Conference the ‘heteronormative’ and ‘capitalist’ ideals such as male and female, marriage and natural family (forcing parents to take responsibility for their own children) that have been imposed on us.

So why did they push so hard for it? Why did Greens Senator Richard Di Natale tell LGBT people that if they weren’t allowed to get married, it would be perfectly natural for them to want to commit suicide? Which is absolutely false, by the way.

The Conversation, December 8, 2017:  “The results of the same-sex marriage postal survey were clear: Australia voted in favour of equality. The marriage equality bill has passed, and the mandate to deliver inclusive sexuality education in schools is more pressing than ever. LGBTQi+-inclusive sexuality education should embrace diversity in the classroom, the staff-room and in whole-of-school policies.”

And now the Queensland Government is citing ‘Marriage Equality’ as the reason why they need to remove gender from official documents….

Elite Transgender Activists don’t want ‘equality,’ they want complete domination. And now the LGBT have served their purpose, the lesbians are no longer required. Just search #GetTheLOut on Twitter and see the physical and emotional violence faced by Lesbians, culminating in a protest float at London Pride March this week. They were labelled ‘Anti Trans’ because they refuse to have sex with biological men. Now, Lesbians want OUT of the ‘LGBT’ rainbow ‘family.’

Women in general are under threat of erasure. Journalist Miranda Devine recently posted an article about a rich, white biological man who paid for plastic surgery and competed against biological women in a beauty competition. Their natural beauty was no match for the workmanship of a plastic surgeon, thus, this biological man took out Miss Universe Spain.

For writing about it, Miranda was subjected to this vile tweet by biological male, Hannah Mouncey, who is lobbying the AFL to allow biological men to play in the newly formed Women’s AFL competition…

Now that it’s clear [most] LGBT people don’t actually want to get married, it’s time to repeal the changes to the Marriage Act, which no longer recognises biological reality.

Share this with everyone you know and lobby your local MP to restore common sense.

8 thoughts on “Australians, You Have Been Duped”