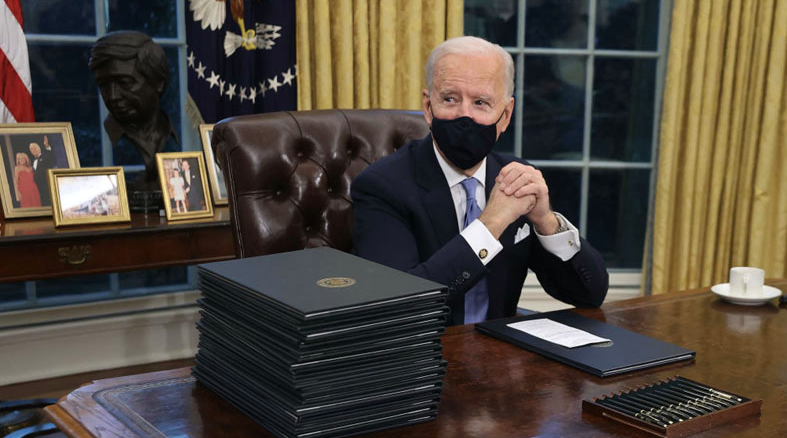 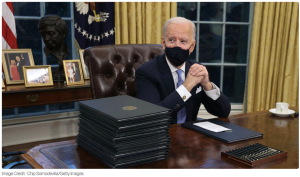 In his first day in office, US President Joe Biden signed a flurry of executive orders, starting with imposing a federal mask mandate, a commitment to ‘racial equity,’ and rejoining the Paris Climate Agreement.

Taking only a couple of minutes to speak to reporters on Wednesday afternoon, Biden listed the three orders he would sign first and answered a question about a letter he was left by his predecessor Donald Trump, calling it “very generous.”

In addition to the “100 Days Masking Challenge” for the federal government, Biden signed an order making it the official policy of the US government to “advance racial equity.” This will reportedly abolish Trump’s ‘1776 Commission’ for patriotic education, which his new domestic policy adviser Susan Rice called “harmful,” and have all government agencies review their programs and action to ensure federal funds are “equitably distributed in communities of color.”

Trump withdrew the US from the climate pact on his first day in office in 2017. Biden’s order would see the US rejoin within 30 days, with former Secretary of State John Kerry now acting as “climate czar” in charge of its implementation.

According to mainstream media outlets that have been given talking points about the executive actions, they will also include an order to count non-citizens in the US Census again – something Trump tried to stop – as well as strengthening “workplace discrimination protections based on sexual orientation and gender identity.”

The Biden White House is also re-establishing the Directorate for Global Health Security and Biodefense, that was part of the National Security Council under the Obama administration, and rejoining the World Health Organization.

Another order would have the federal government reverse or re-do more than 100 Trump directives as “harmful” to the environment, killing the Keystone XL pipeline and reversing the permits for development inside several federal preserves such as Bears Ears and Grand Staircase-Escalante. The government was also directed to “consider revising vehicle fuel economic and emissions standards” to where they were under Obama.

The Veterans Affairs Administration, and the departments of Agriculture and Housing and Urban Development were ordered to extend the moratorium on foreclosing some 11 million mortgages they are guarantors for through March 31, citing pandemic relief. The “pause” on student loan payments put in by Trump shall be extended through September 30.

A slew of “human rights” measures saw Biden reaffirming the White House support for Obama’s DACA program, which Trump tried to rescind but was stalled by courts. He also lifted Trump’s restrictions on travel from Syria, Iran, Iraq, Sudan, Libya, Somalia, Yemen, Eritrea, Nigeria, Myanmar, Kyrgyzstan, and Tanzania – dubbed the “Muslim ban” by critics – and ordered the State Department to restart visa applications for them.

Trump’s national emergency declaration that allowed for funding to be diverted for the construction of the border wall with Mexico was also among the measures reversed by Biden on his first day, along with an order to Immigration and Customs Enforcement (ICE) to change its enforcement “in line with our values and priorities,” though specifics weren’t made available.

Founder joins The Alex Jones Show to break down how American Patriots must operate under an illegitimate globalist Presidency.