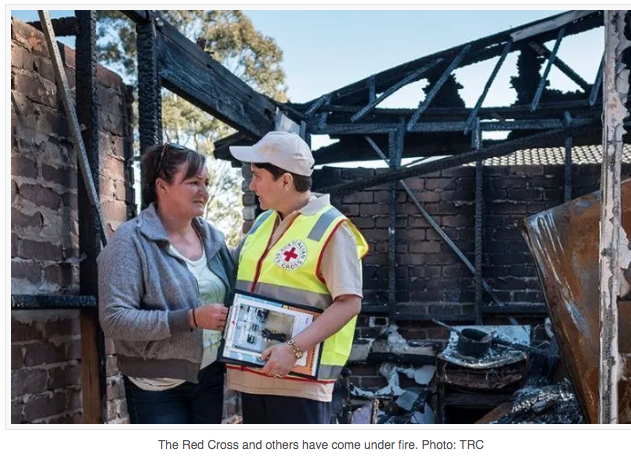 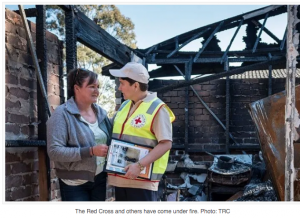 Hundreds of millions of dollars have been donated from around the world to Australian bushfire victims, but those impacted are still yet to see any of the funds.

The $50 million campaign raised by Celeste Barber is set to face ongoing ‘legal hurdles’, while Australian charities have announced they will be keeping most of the funds for themselves.

NO MONEY RECEIVED YET

As focus now turns to the clean up and recovery effort following the bushfire saga, new information has revealed communities on the ground in effected regions have still not received any donations.

Over the last two months, people all over the world have donated generously to charity appeals to help support victims of the Australian bushfires, such as the Rural Fire Service (RFS), Celeste Barber’s Facebook fundraiser and animal rescue organisations like the RSPCA:

He has been meeting with victims to find out exactly what they need and tells 2GB Radio they haven’t received anything just yet.

The most popular campaign, started by Celeste Barber and raising over $50 million from across the world, will now face an uphill battle to even legally transfer the funds across via donation pages.

According to The Australian, legal experts state that the NSW RFS’s trust — where the donations from Celete’s fundraiser is going to — will face many legal hurdles before receiving the funds.

When the funds do arrive, policies state that the NSW RFS can only spend donation money on equipment and related upgrades, meaning there’s a possibility that not a cent of the money from Barber’s fundraiser will go to any of the volunteers or families firefighters.

Australian National University Associate Professor Michael Eburn, who wrote about the fundraiser in his Emergency Law blog, said there was confusion among donors about where the money was going.

Over the new year period, areas of the south coast were completely wiped out by bushfires, with devastating losses in Batemans Bay, Conjola Park, Conjola, Cobargo and Mogo.

This is just one example of a recurring narrative to follow the bushfire saga: Victims have not received any donation support, while charities and organisations keep the finances for themselves.

As money continues to pour in from all over the world to numerous charities and organisations, frustrations are starting to surface over the continued delays and mismanagement of the funds.

This week, the Australian Red Cross has received $95 million to date for their campaign, yet have announced they will allocate just $30 million of the total sum for bushfire victims.

This means only a third of the money donated to the Red Cross will be distributed to victims, when there are communities who cannot afford the basic essentials across the country.

Red Cross Director Noel Clements admitted some people were waiting for relief money as there were ‘challenges’ in proving where they lived. He emphasised that recovery is a “long-term process” and it will take six months for some people to make claims or decide whether to rebuild.

Furthermore, St Vincent De Paul has raised $12.5 million and will only spend close to $1.1 million through financial packages for eligible households.

Similarly, since the Salvation Army’s bushfire appeal began in November, $43 million has been pledged to the campaign — however only $11 million will be received.

Member for Bega and NSW Transport Minister Andrew Constance came out swinging against the Red Cross, Salvation Army and St Vincent De Paul for taking too long to distribute money.

“The money is needed now, not sitting in a Red Cross bank account earning interest so they can map out their next three years and do their marketing,” Mr Constance said.

“We need a very real change, very quickly so that the money can get to those who need it most … people are on their knees and we can’t have a drip-feed.”

Unfortunately, the scandal unfolding before our eyes is all too common in Australian society and is a testament of the regular fraudulent nature of charity organisations.

DONATIONS ARE A SCAM

Australians are among the most generous people in the world per-capita when it comes to making donations to worthy causes.

The charity business is all a game: There are now more than 50,000 registered charities in Australia competing for the public’s charitable dollar.

In 2016, almost 15 million Australians gave $12.5 billion to charities and not-for-profit organisations. However, with so many good causes, how do you know that your money is going to the right place

Many charities discourage direct donations between sponsors and their causes. This is for ‘security reasons’, however ultimately creates distance between any direct action occurring.

For example, World Vision donors discovered when sponsoring five boys, all correspondence appeared to be identical with the same annual letters and drawings from the ‘children’.

More recently, it was revealed that $20 million of drought donations in the last financial year have not reached farmers, despite millions of Australians opening their heart over the 2018/19 summer.

Of the $190 million committed by the Australian government to this cause, after distribution between effected farmers, they would only receive payments of up to $12,000 each.

While many across the country remain in a state of disbelief over the behaviour of charities during this time, as we have explored, the real agenda behind these destabilizing actions is intentional.

The Agenda 2030 plan is now well underway in Australia, and as the aftermath continues to unfold, many victims who desperately need financial support to rebuild their lives will be forced to keep managing unbearable conditions — or pack up and become a part of the emerging smart city grid.

One thought on “Bushfire donations: Where is the money?”