I was lucky enough to meet the beautiful and courageous parents of Chase on Tuesday. They made the trip to Maroochydore to talk about their story. Chase has cerebral palsy and brain damage, due to mistakes made in the hospital at birth. Chase’s records indicate that he might have had 2 doses of the Hep.B vaccine at birth.He was deprived of oxygen and started having seizures just hours after birth. Chase is 4 now and still has multiple seizures every day.

Please watch the video below in which the parents Cini and Marc tell their story about their son, Chase. Chase had a mild seizure at the end of the VaxXed screening and during the Q&A which was taped. We need to share these stories as the mainstream media doesn’t cover them.

Here you can see the full Facebook Live that Peter Little made of the parents outside the Maroochydore RSL.

I hope everyone that see this can help this family out as the government is now threatening to take their payments if they don’t put Chase on a catch-up schedule. Chase is incapable of burping and even swallowing at times. Do we really think his brain and body can handle these vaccines? Chase has seizures up to 100 times a day. Anyone of those seizures potentially being deadly.

You can support this family with the many challenges they have coming up through their Facebook page. Chasing Hope Fundraiser.

This video documents a seizure Chase had at the end of April 2016. 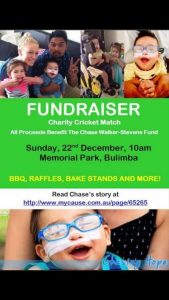