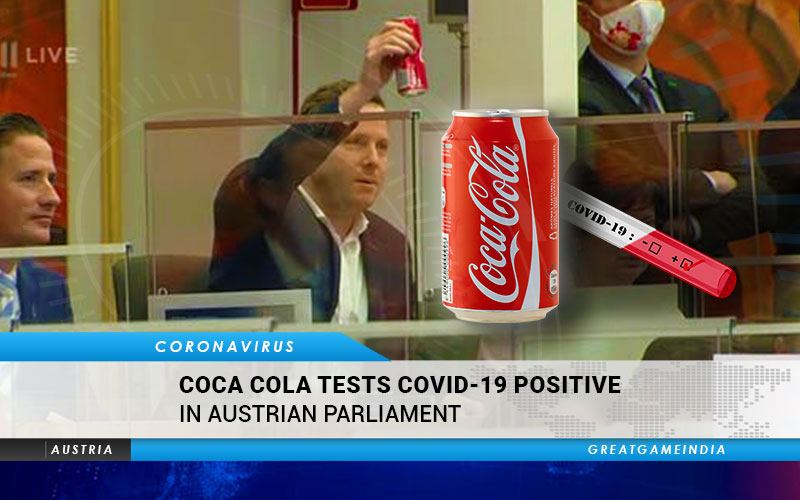 An Austrian parliamentary member exposed the defectiveness of the government’s COVID-19 tests by demonstrating in the parliament how a glass of Coca Cola tested positive for COVID-19.

In footage from the meeting in Vienna Friday, FPO General Secretary Michael Schnedlitz brings a glass of Coca Cola to the podium, from which he proceeds to collect drops to use on an antigen rapid test being used on a mass scale.

After going to the lectern and starting his speech, the politician sprinkled few drops of cola on corona rapid test. Three minutes later the test showed a result: Coca Cola was COVID-19 positive.

After demonstrating a positive result, Schnedlitz goes on to slam the tests as a waste of taxpayer resources.

With things like this you are throwing tens of millions of euros in tax money out of the window instead of providing real protection for old people’s and nursing homes, instead of investing money in our hospitals.

The corona mass tests are worthless! This was also shown by a simple experiment in parliament, in which a cola had a positive result! But this black-green government spends tens of millions in tax money on precisely these tests.”

Earlier, the Tanzanian President John Magufuli growing suspicious of the World Health Organization (WHO), decided to investigate the claims of the tests himself. He sent the WHO samples of a goat, a papaya and a quail for testing, all of which came COVID-19 positive.

It should be noted that the Portuguese appeals court has ruled that PCR tests are unreliable and that it is unlawful to quarantine people based solely on a PCR test.

Read the full article at GreatGameIndia.com.

A video clip from an older interview several years ago with Dr. Kary Mullis, the man who developed the PCR test which is being used today to allegedly detect the COVID virus, has gone viral the past few days.

Speaking about how Anthony Fauci was falsely using the test back then to test for HIV, he criticizes Anthony Fauci who “doesn’t know anything about anything” and his refusal at the time to debate him about the HIV hoax.

Dr. Kary Mullis died in 2019, just weeks before the COVID Plandemic was launched.