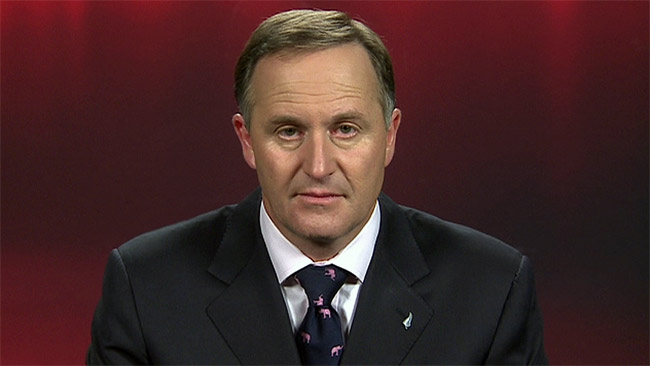 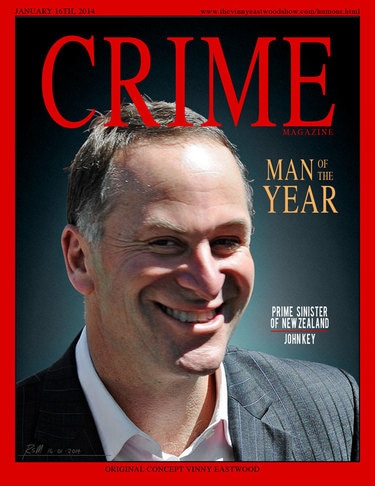 Although John Key has stood down as the Prime Sinister, isn’t it time we arrest this bastard for selling New Zealand down the river?

Think about it, we went from 8 Billion to over 100 Billion in debt in just 8 years!
And that’s just what’s on the books, there was also talk of 112 Billion in “off the books” derivative debts, but that hasn’t been reported on since 2011, lord knows how bloated it is now.
New Zealand now has more homelessness than I’ve ever seen, property prices through the roof, judicial corruption running unopposed, heck, organised crime is all but running every quadrant of this country.
And The prime minister Mr Key just stands down for “personal reasons”?
I doubt that, and I think by briefly analyzing Key’s history he has a track record of coming into a country, loading it up with debt, and then setting sail before the bubble bursts.
His first job was doing insider trading mentored by a wall street tycoon named Krieger, one of the top corrupt capitalists of all time.
After the New Zealand dollar went public Key was commanded to buy and sell a hell of a lot of it, so much that it tipped the economy into economic depression costing a hundred thousand kiwis their jobs.
Of course gaining a big promotion because of his fine work, Key then traveled around the world for his job to Sydney, Singapore, America (where he studied at Harvard) and Ireland, where he assisted 15,000 of his clients to avoid tax using the Irish “Tiger” economy’s “sweet heart tax breaks” for moving his back offices there.
Key put his money in blind trusts and went back to Wall street, the Irish economy imploded.
In 1999 a law called “Glass Steagal” forbidding banks from gambling on the stock market and making money up out of nothing to do it with (Derivatives), was repealed, ironically, that law was instituted after such practices triggered the great depression.
John Key became an advisor around that time to Merrol Lynch, on the board of the federal reserve bank of New York, as the head of the European bond and derivatives trade, then he left that position & came to New Zealand. Directly after that, Merrol Lynch Collapsed.
John Key was elected NZ Prime Minister in 2008, Directly after that, the global economy collapsed.
According to money magazine, the real kicker that triggered the global financial crisis was… derivatives.
In 2016, John Key stood down as Prime Minister of New Zealand, after doubling his net worth (while donating all his Prime Ministers salary to Charity).
What do you think is going to happen next?Presented with high quality audio and edited extremely finely, this 2 hour broadcast was compressed into little more than an hour with the complete criminal history of John Key and New Zealand’s economic slavery to multinational banks own by a network inter-generational wealth families.
Please, share the real history of New Zealand with your friends and family, remember to donate to Vinny Eastwood on the home page or through Patreon, Support your honest and independent media who will tell you the truth no matter how upsetting it is!
www.thevinnyeastwoodshow.com http://www.TheVinnyEastwoodShow.com/1/post/2017/05/economic-hitman-john-keys-history-of-collapsing-companies-and-imploding-economies-by-vinny-eastwood.html#ixzz4i7vX77ZR
www.thevinnyeastwoodshow.com