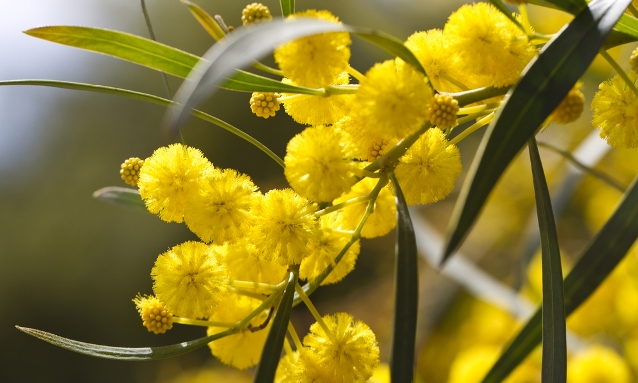 Dr Murphy says he has been contacted several times by people interested in the plant’s ability to produce an unusual and illicit psychedelic drug known as DMT.

It grows everywhere across Australia, but it was nearly accidentally banned because of one of its less benign uses. With applications from food to weapons to cancer treatment, Australia’s national plant has a surprising amount to offer.

The first of this month marked an annual celebration of national identity for Australians.

Unlike the widely publicised and often raucous gatherings of Australia Day, however, this patriotic occasion went by peacefully and largely unnoticed.

It was  National Wattle Day. The golden wattle, or acacia pycnantha, is Australia’s official floral emblem.

This species – along with its 1000 other family members – has been celebrated every year since 1992 on September 1 as a significant part of Australian life.

The wattle emblem could remind some of quintessential Aussie treats like wattle seed cakes, biscuits and ice creams.

For others it could rouse images of the transition from winter to spring when its bright yellow flowers begin to bloom.

Even more still would associate the plant’s green and yellow foliage with the Australian coat of arms or the uniforms donned by our international athletes.

“There are so many species of acacia used by Aborigines that it is impossible to discuss them all,” she says.

The author of CSIRO’s Celebration of Wattle, Maria Hitchcock, says its importance is partly due to its natural abundance from alpine regions to the desert.

“Traditionally, its seeds are eaten, its wood is used to make spears and boomerangs and its leaves and bark for stupefying and catching fish,” Ms Hitchcock says.

“Its smoke was also used for its healing properties, such as curing diarrhoea and healing inflamed skin.”

Among the many uses of acacia that are being investigated are its ability to produce an anti-cancer compound that has shown signs of being able to inhibit the growth of tumors.

There have also been plans to export Australia’s wattle to Africa as a drought-resistant protein source.

Botanist Daniel Murphy from Melbourne’s Royal Botanic Gardens is one of the few Australians dedicated to continuing research into the potential of this prolific plant.

Dr Murphy says he has been contacted several times by people interested in the plant’s ability to produce an unusual and illicit psychedelic drug known as DMT.

DMT is associated most commonly with ayahuasca, a powerful hallucinogen used in the Amazon by shamans as part of spiritual practice.

A proposal to amend the federal Criminal Code Act in 2011 to stop the potential production of DMT could have made our national floral emblem illegal to grow or own in Australia.

The amendments were dropped due to what Dr Murphy says was “a matter of practicality”.

“Acacias are native to Australia and banning them to stop the production of the drug [DMT] would have been too difficult to regulate,” he says.

“Alerting people to the fact that acacia can produce this drug by proposing the amendments was probably going to do more harm than good,” says Dr Murphy.

He says there is still much to be discovered about what it can be used for, including its therapeutic properties.

“With acacia being such a large genus, not everything is known,” says Dr Murphy.

Buffalo Wattle is known for being the most pure natural source of DMT discovered thus far. Brought to the attention of the scientific community by the CSIRO in the 1960’s it was almost brought to total extinction in 2006 bush fires that devastated most of the population. It is said to only be found 900m and above on Mt Buffalo and is notoriously hard to grow although there are reports of successful germination and survival from Tasmania and Ireland amongst others so perhaps the secrets are slowly being revealed.