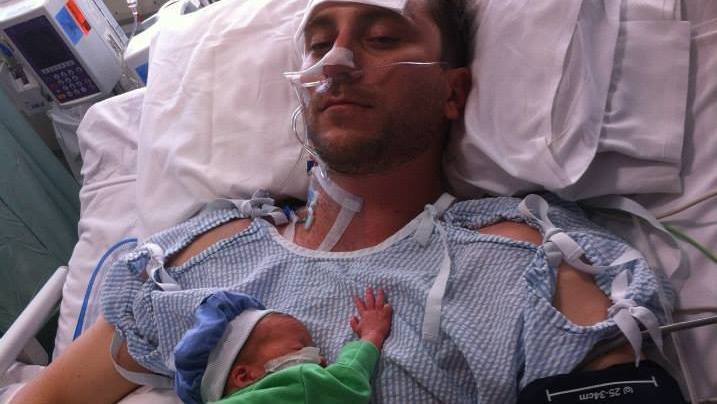 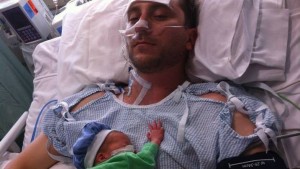 When a person is seriously affected  by a vaccine in Australia and is left with severe long term injuries, their only way to receive compensation is through the courts.  Its an expensive, time consuming and extremely stressful process at a time when more stress is the last thing a family needs.

Usually fault is difficult or impossible to prove and sometimes, very rarely, but sometimes when all the investigations into the vaccine have been completed, it could turn out that no fault can be shown – not in the manufacturing process or the administration of the vaccine. This shows a real problem for people like my son-in-law Ben Hammond.

Ben had the Adacel Vaccination when their baby boy was born 2 months early.  He objected but was told he wouldnt be able to see his baby in the premmy ward if he didnt have the vaccination so of course he did.  12 Days later he was in RPH in ICU fighting for his life and left a quadraplegic !  He was diagnosed with a condition called ADEM (Acute Disseminated Encephalomyelitis). He is now a very sick man and unable to support his wife and 5 children.  A No Fault Compensation Scheme could help people like Ben when they need it most NOW, not 4, 5 or 10 years later when they have lost everything through no fault of their own.

Internationally, 19 countries have a no fault compensation scheme, but Australia doesn’t!  WHY NOT? Please help Ben and other Australians now and for the future by signing this petition and help them when they need it most.

We have been trying to get recognition and help for 3 years now and as an Australian Citizen and as a wife, mum, nanna, mother in-law, I am appalled at the insensitivity of our Government!  Ben did the right thing according to you now you do the right thing by him.

Bens Story can be found on Facebook SEVERE ADVERSE REACTION TO VACCINATION COMPENSATION or “Bens Story”.