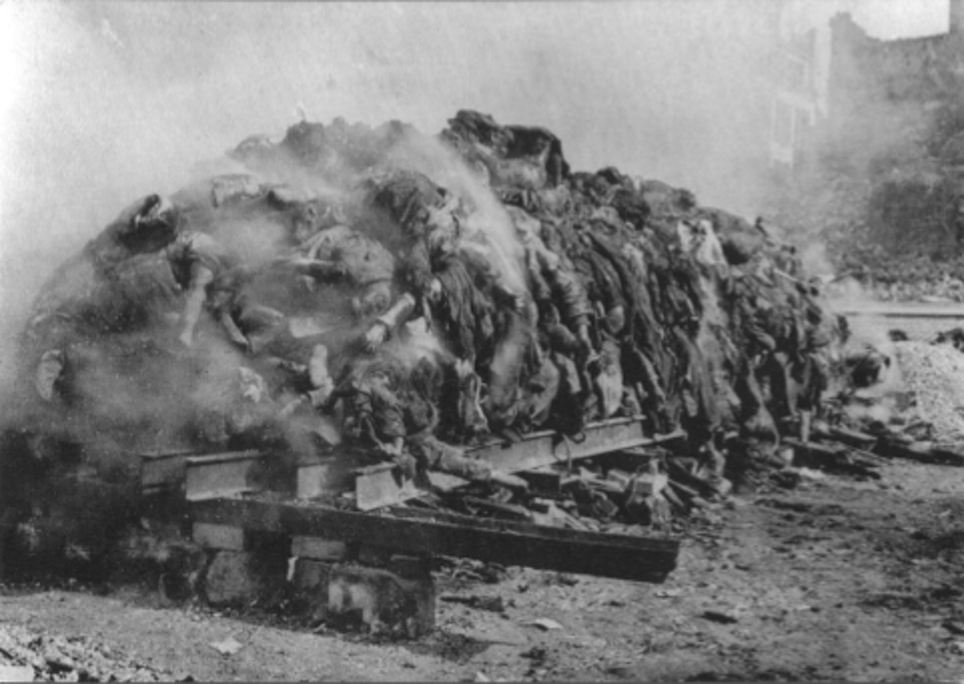 A pile of bodies awaits cremation after the firebombing of Dresden, February 1945
Photo from http://rarehistoricalphotos.com

Many ignorant, brainwashed people have contemptuously referred to me as a ‘holocaust denier’.  This is inaccurate, I do not simply deny ‘holocausts’ per se.

I fully accept the account of the outstanding Russian writer and historian, Aleksandr Solzhenitsyn, who was sometimes referred to as ‘The Conscience of the 20th Century’ and who served eight harsh years in the Soviet Gulag prison system, when he reported in his book entitled ‘Together For Two Hundred Years’ that in the Soviet-Zionist ‘holocaust’, 66 million innocents, mostly Christians were kidnapped, tortured, raped and murdered in a wide variety of cruel, wanton, and terribly inhuman ways in the thousands of monstrously evil Gulag concentration camps at the hands of the Jewish Bolshevik Cheka corps.

I also accept as fact the Gaza Palestinian ‘holocaust’ with the Zionists releasing two dams to drown and flood their homes after bombing their cities with phosphorus bombs and cluster bombs and attacking them with tanks, denying them both food and medical support. And I also accept that for the past 70 years, the IDF has continued its genocidal policy of attempting to wipe Gaza and the Palestinians in their entirety, from the face of the Earth whilst murdering in cold blood many, many thousands of innocent women and children as crowds of sick and twisted Israelis stand by and even cheer from hilltops as they watch the Israeli bombs do their evil work.

I freely acknowledge the fact that on 13/14th February 1945, in the ‘holocaust’ perpetrated on the non-military target city of Dresden in already defeated and devastated Germany, more than 700,000 phosphorus bombs were dropped on 1.2 million helpless people, which produced a firestorm that reached 1600 degrees centigrade and in which approximately 500,000 German women, children, elderly, wounded soldiers, refugees, random citizens and even most of the animals in the city zoo were slaughtered by oxygen starvation and fire in a single night. I also acknowledge that the stunned survivors gathered together on the banks of and indeed immersed in the river Elbe, to escape the punishing heat were subsequently ruthlessly and needlessly, callously machine-gunned to death by hundreds of low-flying allied aircraft.

I absolutely recognize that twice as many people died there in Dresden, in that incident, than the estimated total of 250,000 helpless people who died in two other ‘holocausts’, the senseless, wantonly murderous, abominable and unnecessary atomic attacks upon the Japanese cities of Hiroshima and Nagasaki combined.

I openly acknowledge the virtually forgotten ‘holocaust’ endured by the passengers and crew of the Wilhelm Gustloff, an unarmed German passenger liner which was torpedoed and sunk in the freezing waters of the Baltic Sea, 13 miles off the coast of Pomerania on 30th January 1945, as it carried, besides its men and crew, some 73 wounded soldiers, 373 members of the Women’s’ Naval Auxilliary and some 9,000 German civilian refugees, mostly women and children, who were all fleeing in terror from East Prussia due to the murderous advance of the Red Army and where only a few hundred lived to tell the tale, making it the deadliest disaster in maritime history, killing six times the number who died on Titanic.

And I fully admit that, as accurately reported at the time yet since denied by the now totally Zionist-controlled, International Red Cross, a grand total of 271,304 people – not all of them Jews – died in all of the German concentration camps combined, by the end of World War II, a ‘holocaust’ which was solely the result of typhus epidemics and starvation caused by the Zionist-endorsed, allied carpet-bombings of supply routes and centres all over Germany that made it impossible to transport food and medical supplies to prisoners, soldiers and civilians alike and not as a result of homicidal, purpose-built gas chambers.

And I most certainly do not deny the ‘holocaust’ of the over 2 million German post-war, non-combatants who were rounded up, detained without any food, water, shelter or medical care and purposely and systematically killed through starvation and exposure in 1945-46 under the supervision of the allied commander Dwight D. Eisenhower, in the largest outdoor concentration camp this side of modern-day Palestine or the concurrent ‘holocaust’ of the wholesale cold-blooded rape and murder of untold hundreds of thousands, if not millions of women and children as the communist Red Army of the Soviets also took its ‘revenge’ upon the defeated and helpless German nation.

I do not deny the ‘holocaust’ suffered by the good men and crew of the practically unarmed USS Liberty surveillance ship, which was deliberately attacked by air and sea, with machine gun, cannon and torpedo fire by Israeli forces on 8th June 1967, killing 34 and wounding 174, in an attempted false flag operation which was intended to sink the ship and murder all those aboard, in order to draw the United States into the so-called ‘six-day war’ on the side of Israel by claiming it was the Egyptians that perpetrated the crime and was only foiled by the ingenuity and resourcefulness of the crew in aiding the radio operator to successfully transmit a distress call.

And I do not deny the ‘holocaust’ of the 3,000 people who died as a result of the false flag attack on the World Trade Center in New York which was engineered and perpetrated by leaders of the Israeli-instigated Project for the New American Century (PNAC) in order to perpetrate their pre-planned ‘Clash of Civilizations’ which they hope will eventually cause their two sworn enemies, the Christians and the Muslims to forget their historical religious commonalities and annihilate one another in the yet-to-come greatest ‘holocaust’ in history, the planned third world war as the ‘chosen people’ sit on the side-lines, direct… and watch… and profit… while gleefully rubbing their hands as even more untold millions of innocents die.

I also do not deny the ‘holocaust’ of the Jenin Refugee Camp, on 13th April 2002, where Israeli forces attacked the camp using bulldozers, tanks and Apache helicopters in a cruel, indiscriminate, blood-lust slaughter, which was said to be ‘horrific beyond belief’ and which lasted for 13 days, flattening large areas of the town and killing unknown thousands of innocent men, women and children, many of whom were buried alive; or the earlier, similar ‘holocausts’ at the Sabra and Shatila refugee camps in Lebanon in 1982, in which it is known that at least 800 Palestinians were killed.

Nor do I deny the wholesale slaughter and destruction perpetrated upon the sovereign nation of Iraq, in the ‘holocaust’ that was the illegal and unjustified war of aggression that, from 2003 to the present day has resulted in the murder of over one million innocent Iraqi men, women and children and brought their country to ruin, as one of the first steps in Israel’s ongoing war of terror, which they have the unmitigated gall to present to the world as a war ‘on’ terror… and for which the final tally of victims is yet to be seen.

And, while I’m at it, let me just note here that I absolutely acknowledge the fact that the perpetrators of the above mentioned and relatively recent ‘holocausts’ have a very long history of either directly or indirectly committing numerous other such atrocities against many peoples over many millennia, even since ancient Biblical times – from the slaughter of the Midianites to the African slave trade – a number of which being the basis of and celebrated during various Jewish holidays. And though I do not fully describe them here, I do not deny any of them either.

What I do deny however, is the ridiculous and exaggerated claim that there is ANY evidence at all that ANY Jews, much less ‘6 million’ of them, died from ANY intentional gassings or as a result of ANY kind of organised or systematic programme of genocide perpetrated against Jews by Germany’s Nazi regime… and I challenge ANYONE to produce ANY evidence or ‘proof’ that is not merely made up of either pre-war, wartime or post-war Soviet, American and British anti-German propaganda… because none, from either then or now, actually exists.

So, if you want me to talk about a ‘holocaust’… and I mean a REAL, genuine, genocidal ‘holocaust’ and not only the ones from the past, but one that is happening right NOW, in the present, all you need to do is to pull your brainwashed heads out of your collectively ignorant backsides and look independently into the current goings-on in Gaza, The West Bank, Syria and the Middle East in general, where the racist, supremacist, Zionist, Talmudic Jews are feverishly working day and night to exterminate anyone who stands in their way in their quest to build their racist, supremacist, New World Order or ‘Kingdom of the World’ aka Israel.

And if any sanctimonious, self-righteous followers of mainstream edicts deny any of these realities and merely cling to the much-touted view that the only holocaust that really matters is one that is purported to have been suffered by God’s ‘chosen people’, then for you to call anyone else a ‘holocaust denier’ is one of the most laughable and hypocritical examples of psychopathic projection I have ever witnessed.

2 thoughts on “Holocaust Denier – What Me?”