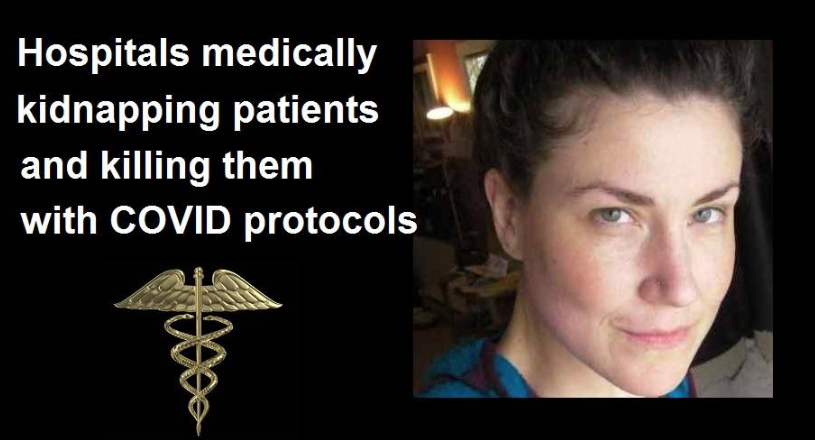 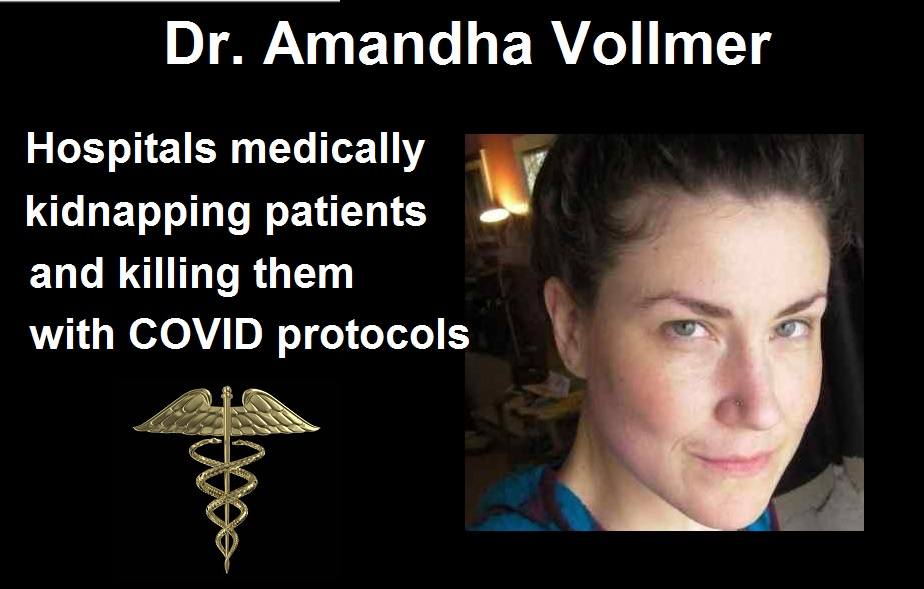 Dr. Amandha Vollmer is a Naturopathic doctor based out of Canada, but provides education and and counseling for people outside of Canada as well, including the U.S. which I imagine is where most of her clients reside.

She published a video this week about the experiences of several of her clients being medically kidnapped in hospitals, and forced on to COVID protocols against their will, resulting in some of them dying.

Dr. Vollmer uses natural treatments to cure people, and is an expert on dimethyl sulfoxide (DMSO), having written a book about it. She also started a website last year called “The Big Virus Hoax.”

This is not the first time we are hearing about patients being murdered by COVID protocols, as this is now being reported all over the Internet while the Pharma-owned corporate media continues to promote the official COVID narrative that all these people are dying from COVID.

We can now safely conclude that hospitals and their financially incentivized COVID protocols are the #1 cause of deaths in the U.S.

This is not as big of a revelation as one may think, since the medical system itself admitted back in 2013 that hospital errors were the 3rd leading cause of death in the U.S., just after cancer and heart disease, long before COVID arrived. See these articles from 2013:

Hospital Errors are the Third Leading Cause of Death in U.S.

Death of Americans: The Medical System is Now the Third Leading Cause of Death in the U.S.

This is from our Rumble channel, and it is also on our Bitchute channel.

Hospitals medically kidnapping people and holding them against their will is nothing new either. I believe I was the first one to use the term “medical kidnap” publicly back in 2013, and shortly after that started a whole website devoted to the topic in 2014: MedicalKidnap.com.

We covered mostly stories of children being medically kidnapped from parents against their will and being put into the foster care child trafficking network, but we also covered some stories about adult medical kidnapping as well, which is actually a larger problem, long before COVID ever arrived on the scene.

While pre-COVID about a half million children were put into the foster care system nationwide, about three times that number of adults were medically kidnapped, with 1.3 million, mostly seniors, forced into state-appointed guardianships representing $50 billion of their assets seized by the State. See:

So the medical hospital system has been a criminal enterprise in the U.S. for a long time, and things are much worse now due to COVID protocols that are literally murdering people.

A few weeks ago, on August 8, 2021, we published an article with family horror stories where members of their family were killed in hospitals via COVID protocols. See:

We asked people to share their stories in the comments. Here are a few of them.

A 69 year old family member became dehydrated while alone in a different state. He went to the hospital (first mistake) where they insisted he take a Covid test. He declined but they insisted. The test was “positive “. He asked for Ivermectin. They said it doesn’t work and gave him Remdesivir and antibiotics. He said he didn’t want to be put on a ventilator. Long story short he ended up on one and died. His family was not allowed in to see him until he was dying. They asked for high dose vitamin c to be given and were told it doesn’t work. These hospitals are murdering people in my opinion. This man was a born again believer in the Lord Jesus Christ which is our great hope.

Get your Hydroxy Chloriquine and Ivermectin from Frontline Doctors. Take vitamin C and D and Zinc. Exercise and eat right. Be prepared for eternity. Fight for freedom! – Michelle Miller

My brother-in-law just died. He went to the hospital. Covid pneumonia they said. If we could have kept him home and given him IV & oxygen,he would have had a better chance. He was only 49. – Melanie

A really close family friend – who had been vaccinated both doses of Pfizer, used masks and implemented social-distancing protocols even within his home religiously – passed away around a month ago. It all started with a sudden, unexpected decrease of oxygen saturation. He was immediately admitted to a hospital. After a day or so, he got slightly better. But since the COVID protocols had to be followed, they kept him there and continued ‘treatment’. Eventually, his oxygen saturation decreased once again to alarming levels, and he was put on ventilator. He never came back.

A strikingly similar incident happened with my uncle – who was also fully vaccinated. He, too, passed away around 2 weeks ago.

The worst thing is that many doctors are either completely ignorant of the consequences of their ‘treatment’, or they ignore such warnings and incidents and deem them as ‘rumors’ or ‘myth’. Of course, they’re ‘just following the [medical dictators]’. My dad and brother are doctors, yet are completely brainwashed with the ‘religion’ which CDC, WHO, etc. etc. propagate. – I.M.

I am sooo very sorry to hear about this experience. My brother’s life was taken from him in this COVID rabid environment, which has no respect for life. I don’t know if had COVID, but he went to the hospital in an ambulance because he couldn’t walk. He said he was having never damage. He also said he was congested. Although he was perfectly coherent and talking, he was only in the hospital for two hours and he was dead. They reamed a ventilator down his throat because they said his oxygen levels were in the 80s. When they reamed the ventilator down his throat he let out two curdling screams and he was dead. I have since found out that there are non-invasive ventilators that they could use, such as high flow nasal cannulas, and helmet ventilators. They are much more humane and non-invasive. People need to know about alternatives to these invasive ventilators. – makemba007

For an insider perspective from within the system, here is a whistleblower board certified occupational therapist from Hawaii explaining the same thing. This testimony was published on our network on August 11, 2021, and his video has now been viewed over 350,000 times on our video channels.

Board Certified Occupational Therapist Whistleblower: More Patients are Dying from the Vaccine than from COVID

You Risk Your Life When You go to a Hospital

You have always risked your life in recent years when going to a hospital, but now that we are under the Satanic COVID spell that is deceiving the world, the risks are exponentially higher, as hospitals are now the #1 cause of death, and should be renamed “killing centers” or “euthanasia centers,” as they do not make much money for curing people, but thanks to the $TRILLIONS set aside for “COVID treatments,” which include vaccines, these places make a ton of money for treating COVID patients, including putting them on ventilators which have a very low survival rate.

There are plenty of successful natural treatments for COVID symptoms, as well as all other illnesses defined by the medical system. I myself have not used the medical system for many years now, and have not carried health insurance for over 20 years.

The system is totally evil, and profits from death and illness more than from cures and health.

It is time for true healers to leave the system, and start building a new paradigm of healthcare completely separate from the system.

But that will never happen until we remove the tyrants from power first, because they have all the money, all the judges, and all the weapons on their side now, funded by the Corporate Globalists, and they will not tolerate any competition.

It is time to resist, and bring the murderous evil system down.

This could be our “Civil Rights” battleground, much like Selma, Alabama was for standing up for the rights of Blacks to vote, as we documented yesterday.

How about if medical personnel who truly know how to treat patients with actual cures, together with military, law enforcement, and just members of the general public join together in protest, take over a hospital, throw out the murderers, and let true healers start healing and treating people so the world can see what has been truly happening?

There are a lot of medical professionals unemployed right now, because they refuse to get the COVID shots.

Such a demonstration and protest would have far more effects than marching on State Capitals, for example, which only employ politicians who probably are not there when you protest anyway.

People are DYING every day in hospitals, needlessly at the hand of murderers, and maybe it is time we start taking over the hospitals, one by one, sacrificing our own blood in the process if that is what is necessary to resist the tyrants.

The Blacks did it back in the 1960s. Why can’t we follow their lead and do the same thing today?

2 thoughts on “Hospitals Now #1 Cause of Death: Medical Kidnapping the Norm as Patients are Sacrificed on the Altar of COVID”