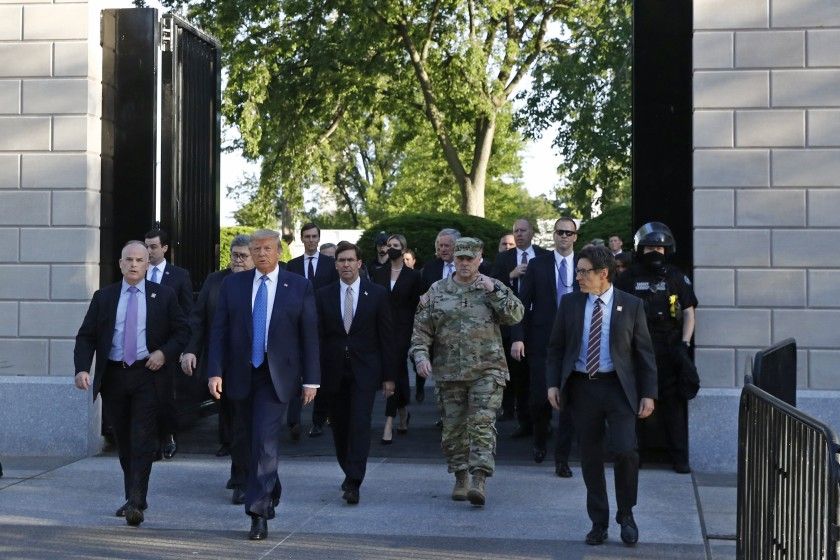 On Tuesday December 15, President Donald Trump sent out a series of messages that shudder of law and order, giving off the feeling that greater law enforcement action is imminent to preserve the integrity of US elections, now and for the future.

The President must defend the Constitution against all enemies, foreign and domestic. Adamantly, Trump warned that the fight is not over, that there is “much more to come.”

President Trump singled out the 68 percent error rate in the Michigan voting machines.

“Tremendous problems being found with voting machines. They are so far off it is ridiculous,” President Trump tweeted. “This is not what the USA is all about. Law enforcement shielding machines. DO NOT TAMPER, a crime. Much more to come!”

Dominion Voting Systems in Antrim county Michigan recently underwent a forensic audit. By federal law, the Federal Election Commission only allows the machines to harbor an error rate of only 0.0008 percent.

The Dominion Voting Systems had a 68.5 percent error rate and all the security log files were deleted! This error rate adjudicated an unprecedented number of ballots, allowing Democrat election officials to manually assign the vote for each rejected ballot behind closed doors.

This is why thousands of votes were switched from Trump to Biden in that precinct. With this evidence alone, all Dominion Voting Systems machines should be impounded across the U.S. and subjected to forensic audits.

If the final vote tabulation is fraudulent in this county, why wouldn’t the same tactics be programmed into Dominion Voting Systems in counties across the country? This tactic allows votes to be switched after election day — the security log file trail covered up.

Military Should Be Called Into To All Swing States, Especially Georgia

This tactic is coordinated election fraud. The military should be called into seize the machines and take possession over the ballots. The ballots could be subjected to a kinematic audit that uses the laws of physics and mechanics to determine the printing of fraudulent ballots.

The military should be called into Georgia for certain, where Governor Brian Kemp and Secretary of State Brad Raffensperger have conducted meaningless recounts that count fraudulent ballots over and over, while not matching signatures of absentee ballots with the signatures on the envelopes nor conducting any forensic audit of Dominion’s voting system.

“President Trump is a genuinely good man,” Wood’s tweet read. “He does not really like to fire people. I bet he dislikes putting people in jail, especially “Republicans.” He gave @BrianKempGA & @GaSecofState every chance to get it right. They refused. They will soon be going to jail.”

Many of Kemp’s colleagues, friends and family could go to prison for rigging the election and for sending huge amounts of money to China for “covid supplies” that ultimately got funneled to the Governor’s family and colleagues via kickbacks from communist China.

The state began using Dominion Voting machines for the 2020 election and approved mail-in ballot drop boxes at unsecure locations. These drop boxes are prone to ballot harvesting operations and thousands of change of address ID fraud have been identified in the state.

Is President Trump Preparing To Invoke The Insurrection Act Of 1807?

This would authorize the deployment of land and naval forces on US soil to stop the insurrection or obstruction of the laws of the United States and the individual states.

The President could call forth the militia for the purpose of suppressing such insurrection or of causing the laws to be duly executed.

President Trump has already provided legal precedent to use the insurrection act: He also wrote:

“Swing States that have found massive VOTER FRAUD, which is all of them, CANNOT LEGALLY CERTIFY these votes as complete & correct without committing a severely punishable crime,” President Trump said.

“Everybody knows that dead people, below age people, illegal immigrants, fake signatures, prisoners, and many others voted illegally,” he continued.

“In all Swing State cases, there are far more votes than are necessary to win the State, and the Election itself,” President Trump concluded.

“Therefore, VOTES CANNOT BE CERTIFIED. THIS ELECTION IS UNDER PROTEST!”

The gloves are coming off.

4 thoughts on “Is President Trump About To Invoke The Insurrection Act And Arrest Government Officials Complicit In Election Fraud?”