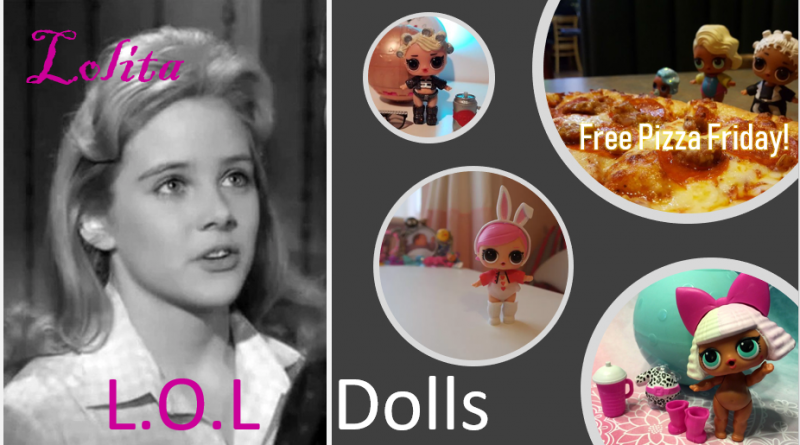 The L.O.L Dolls (Little Outrageous Littles) have been sweeping nations since 2017 and have been alarming people all over, but unfortunately not for the same reason that they alarm me. These little naked dolls, which you unwrap and dress, are dressed a little older than their intended ages, and the ages of those playing with them.

These little dolls are wearing make up, stockings, heals, thigh high boots, mini skirts and bikini tops. They all have a hole in between their legs in case they are ‘pee’ers’ and not spitter’s or crier’s. Their clothes never fit correctly and always show their knickers and bums. This has left only a few parents feeling a little uneasy.

Some of the doll’s names are ‘Teachers pet’, ‘Goo Goo Queen’, ‘Flower Child’, ‘Baby Doll’, ‘Foxy’ and ‘Go-Go Girl’, who is licking her lips and winking. This all should feel a bit “off”. Not to mention the name itself LOL – Lolita could come to mind, when seeing a bunch of dolls with big pouts and exposed frilly, glittering knickers and a passion for pizza.

Isaac Larian, Jewish owner of MGA Entertainment, created the dolls to cash in on the big youtube “surprise eggs” phenomenon. Over the years he has worked on Bratz dolls, Bouncing Baby and Lalaloopsy, which was also a Lionsgate production in partnership with MGA for Nickelodeon. Lionsgate Studios was responsible for the controversial Lolita remake in 1997. Lalaloopsy favourite ‘Blossom Flowerpot’ dolls look similar to the format for the L.O.L Dolls.

Of course this could all be worrying for nothing – surely dolls dressed in such a way, and called Lols is just a coincidence, and the pizza itself is just an american staple diet these days.

When discussing Bratz dolls, which have for years now been controversial for their so called marketing to a ‘paedophile quality’, Isaac disclaims this idea and states that:

These are just plastic dolls and they do not promote anything. It is up to parents to promote their values to their children”

He then continues with a contradiction a few sentences later in the same interview:

We are proud of these dolls, they are the first dolls to promote diversity, they promote sports and they promote education”

He seems a little undecided as to whether dolls can or cannot have an impact on a societal structure, though he continues to say that these dolls are just that, dolls and no more, and that he does not see them as wearing anything provocative.

What kind of fantasy doll? When asked their ‘paedophile quality marketing’ he retorts:

How do they know that something is sexy, if they are not just reading sex into it themselves. I say they are perverts”

This statement could be accused of being a classical psychological projection defence mechanism by calling many worried parents ‘perverts’ in light of their concerns, about what they believe to be sexualised dolls. Surely this man would want to ease parents’ minds, not shame them? But of course shaming people and making them question their own judgement keeps them quiet and the sales ticking over, regardless of whether or not his persona and marketing strategies are questionable.

Does the world really need a doll that has a small hole in case she is a doll that urinates. This hole will be blocked if she spits or cries. I understand it saves money to give them all holes, however it feels very vulgar.

A doll that spits, cries or urinates – this water fun side to the doll extends the unwrapping experience, making it last a bit longer as the toys are dunked in cold or hot water to see whether they are colour changers and whether or not they need that hole in-between their legs.

The sparkly doll is the current best seller in the UK and is often required to be pre-paid for before the next series arrives, to ensure you do not miss out. Unfortunately the main criticism of the dolls so far has only been the price, as the big gold ball, which ends up with four small dolls (two big sisters and two lil sisters) with a few accessories, is 60 GBP.

Why is nobody asking, why are these dolls wearing fishnet stockings, urinating, winking and licking their lips in frilly pants? Why are they called names like ‘Show Baby’ and ‘Foxy’? Why can they only sit down one way, as their legs do not bend and only swing out wide open? This is all our dirty minds, right?

The reason parents are only kicking off about the price and not the doll itself allows me one theory. When the new BRATZ doll came out, it took all of that flack, all of that shock and disgust, and in comparison to L.O.L Dolls, Bratz dolls look like Nuns. Did we hear so much that we now hear no more? Was it in fact so talked about, that the subject is now forgotten, and the real pouting ‘fantasy dolls’ can slide in without being noticed? Especially when they are so ridiculously priced, and a YouTube sensation, upping all blind bags and surprise eggs to creep up and match their price field, that this is now its main criticism.

Every time I see these dolls, I can’t help but go back to the original pin up girls of the past. The facial expressions are spot on, again though, am I just making ludicrous associations?

The fact is these dolls only eat pizza, look like old fashioned pin up girls, have very ‘outrageous’ names, wear revealing clothes, which do not even join properly at the back, and are called Lol, a widely accepted term for underage sexual tastes – Loli, Lolita, Lol.

Although Stanley Kubrick made Lolita in 1962, by scripting a 1955 book, Color Climax Corporation, highlighted the term ‘lolita’ in a much more real sense, by filming the ‘lolita’ video series which included, ‘incest family’, ‘pre-teen sex’, ‘sucking daddy’ and ‘child love’. There were over 36 videos made in the series, all filming girls between the ages of 7-11, because Denmark had very loose laws upon pornography, the child abuse recordings got a very long run.

I am sure this is all a coincidence and my worries are for nothing. Maybe I should just be concerned about how much they cost me or how much plastic they use instead. As rarely as this happens, my mother even said they freaked her out, when she read their names and saw their stockings, with slogans like:

In the days of mass social media and critique, why would a billion dollar company have a design team that would put out a doll like this, a year after pizzagate? Surely any marketing team would red flag this dumb idea, and correlate the info I have? This looks like ‘special’ marketing, especially when Isaac Larian has so much power and input into the dolls himself. He does seem able to handle all criticism well and is proud of his achievements, taking it all in his stride and bringing us the much needed ‘ethnic diversity’ we need, but not at all sexuality, because dolls can, when desired, promote social changes and acceptance, but at the same time, they cannot. They are just dolls after all.

Maybe they are just having a big lol at us all?

One thought on “L.O.L. Dolls and Free Pizza Friday are More Than a Little Outrageous”