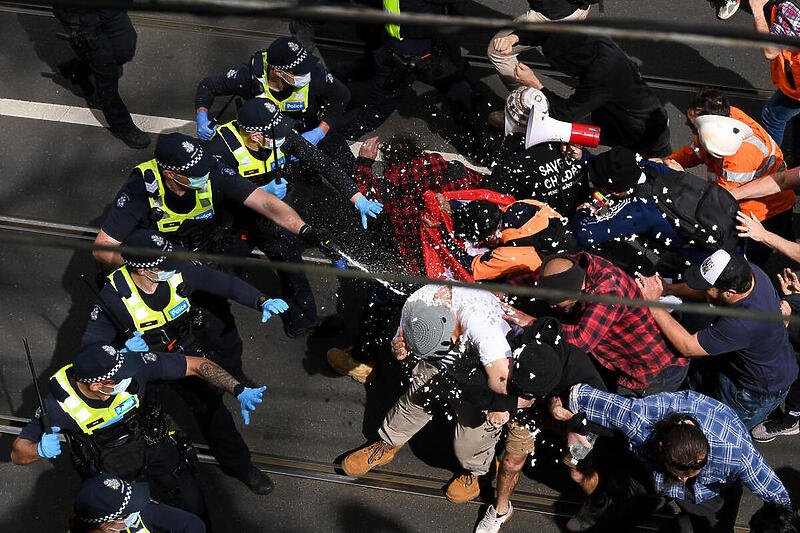 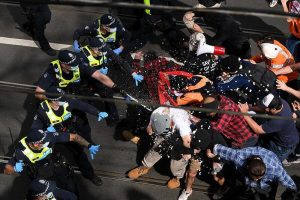 TOTT News provides readers with an on-the-ground timeline of events from today’s ‘violent’ freedom protest in Melbourne – including what the media DOESN’T want you to see.

Melbourne has spent 228 days in lockdown since since March 2020.

The state is set to notch up a grim world record for the most days spent under stay-at-home laws when it passes Buenos Aires on September 23.

People have lost everything, and the past 12 months have seen unprecedented shifts.

Yet, despite spending more time in lockdown than most of the world, citizens of Melbourne are still unable to exercise their democratic right to protest.

Despite admitting there was no evidence that the last freedom protest spread any virus, Daniel Andrews turned the police against the public today and deprived them of basic services such as public transport, all in the name of ‘public safety’.

2,000 police gathered in a large group, to prevent people gathering in large groups.

Melbourne’s beating heart, the CBD and inner suburbs, became almost silent this morning — other than the sound of police and media helicopters. A Brave New World Order.

Melbourne is already in lockdown, so a ‘double lockdown’ zone applied across up to 360 square kilometres of the city. Tram, train and bus routes that transverse the CBD were shut down.

The agenda was to prevent protesters from gathering in the city.

However, this plan ultimately failed, with protesters determined to have their voices heard.

Demonstrators turned out in Melbourne to protest against lockdown measures, as they swarmed in front of traffic in Richmond, in the Victorian capital’s inner-suburbs.

If you turned on the television last night, you would hear talking heads describing how protesters were ‘angry men’ who were only ‘looking to cause mayhem’.

Police say those who attended today were not fighting for freedom, but say attendees were “angry, aggressive young males” there to fight the police.

“What we saw today was a group of protesters that came together, not to protest freedoms, but simply to take on and have a fight with the police,” Victoria Police Commander Mark Galliott said.

However, the larger timeline and story was cleverly avoided.

Were protesters really looking for a fight?

Was everything as ‘violent’ as described across the 2 hour rally?

Citizens, armed with smartphones and cameras, have become the media now.

Here is what the TV didn’t show you.

Protesters gathered in Richmond in a peaceful manner, deciding to momentarily block traffic for a few speeches — a common technique employed by most protest movements across the world.

Following a few small speeches on the street, protesters began moving up the street as police began to arrive. As they did so, forces formed a line in front of them and walked ahead.

Protesters begin chanting “you serve us” at police as they walk ahead of the group. A police helicopter hovers overhead, and already, things

Surrounded with nowhere to go.

Next thing, the protesters became trapped as police formed a ring around the group. This is a successful technique that has been employed to herd campaigners in the past, particularly G20.

A father stands with his daughter on his shoulders as they become trapped.

This photo is undoubtedly heading for the history books.

Despite media reports of ‘instigation’ and ‘violence’, it was actually the police that began the hostilities. This is confirmed by an unedited, one and a half hour livestream of the event.

In the media below, police deploy capsicum spray and attempt to subdue protesters in Richmond:

Check out that right hook..

Early ‘arrests’ are made as some protesters are violently singled out by the police force.

Despite being trapped in a ring of police, protesters did not lash out at the authorities.

Instead, they begin to sit on the ground, playing John Farnham and pleading with officers to sympathise with their demonstration. Or at least let them pass and continue the march.

How are police ‘preventing spread’ by bringing groups to a compact standstill?

In the video below, one woman pleads with line blocking the pro-democracy march: “My Dad fought in a war for freedom, and look at what you guys are doing to us.”

Police officers begin taking up more of Burnley Street in Richmond, which is now blocked on either side. As a result, the crowd is singing ‘We Will Rock You’ and ‘Waltzing Matilda’.

They also continue “you serve us” chants, while remained sitting and peaceful.

Try to escape and head back home..

Once again, NOT looking to incite violence with the police, protesters head through a side unit complex to escape and attempt to head back to their cars.

Contrary to media reports, protesters claim this gate was already unlocked, not broken for access.

Police continue to stalk the group..

The authorities re-emerge quickly after being foiled by the demonstrators, who are heading back up Richmond. They are moving quickly to ensure no traps are fallen into again.

They are continuously funnelled through Richmond, before ending up on ‘that’ very small (now infamous) residential street. Note that protesters are still peaceful up to this point.

However, democracy in action was again short-lived, as protesters discovered the police force had once more blocked them in from both sides when reaching the end of the street.

At this point, residents are far away from their cars and the original meeting spot.

Police FINALLY get their provocation..

After an hour and a half of diverting protesters through the city, the people eventually break through. The police finally got what THEY wanted, and that was a violent clash.

Here is an alternative angle of the now worldwide scenes:

The media say police were ‘forced’ to deploy capsicum spray, before arresting dozens of protesters.

Yet, all the protesters wanted to do at this point was go home, and all of this could have been avoided if the police — with no evidence they are spreading the virus — allowed them to do so.

Yet, this one very scene is here is ALL the media will focus on. Ignoring the larger picture.

Similar to the fake ‘man punches horse‘ or ‘officer hit with ink‘ stories from last rally.

Yes, violence did momentarily ensue — but are the protesters the only ones to condemn for this?

Why are the media NOT showing acts on the other side of the picture?

Old lady knocked down and sprayed.

As most of the protesters head up the road, shocking video and photo shows a police officer aggressively knock over an elderly woman, before hitting her in the face with capsicum spray.

What was the justification for such excessive force?

The officers involved in this incident should be investigated for their actions immediately.

An innocent bystander, caught in the middle of police pursuit, gets knocked to the ground.

Do you think they would come back for her? No.

It was the protesters who checked on her health and well-being.

The media would have you believe that this scared woman is a ‘crazy, right-wing conspiracy theorist’ and a ‘public health threat’ to you and your loved ones.

Does this look like the face of someone like that? Or an ordinary mother, sister or daughter?

The police force act like thugs and paint the ones they arrest as said thugs.

After the event, Chief Commissioner Shane Patton said police would be patrolling trains to ensure commuters had legitimate reasons to disembark. Australia in 2021, folks.

Our friend Marty Focker was also on-the-ground for the event, and has provided additional footage that highlights police behaviour during the day. In slow motion for everyone to see.

What has this country become?

The world is watching and the media propaganda stronghold is shattering.

Share this piece with all those who need to see it.

What do you think of the media provided on this timeline?

Does this match what the TV is saying? Or are they lying to us yet again?

Thank you to TOTT news Australia for helping us to get this out to the world.