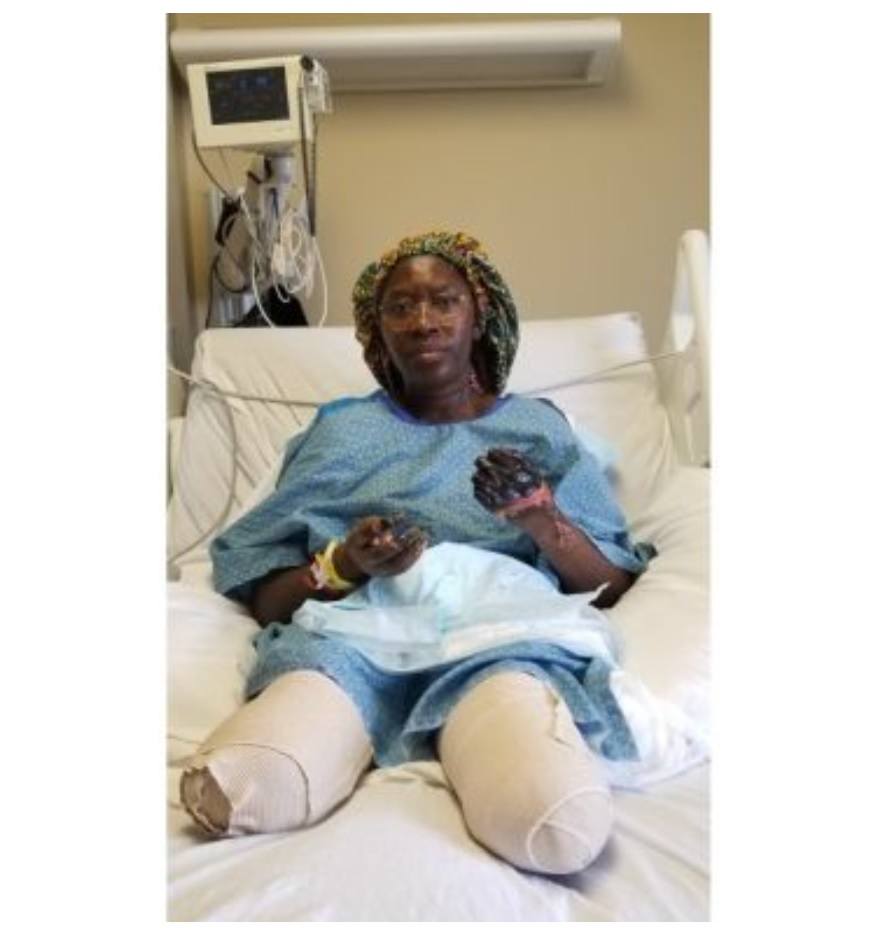 Jummai Nache, and her husband, Philip Nache, were born in Nigeria and came to the U.S. to settle in Minneapolis a few years ago, working with the Southern Baptists to plant churches among the African communities living in Minneapolis.

They were reportedly forced to leave Nigeria due to the “Boko Haram terrorist group,” and eventually ended up in Minneapolis serving as missionaries with the Southern Baptists.

Tragically, it appears that the Naches have adopted many of the American Christians’ values here in the U.S., which includes participating in and trusting the corrupt medical system.

Jummaci was working as a medical assistant in a clinic in Minneapolis and was instructed to take the COVID-19 “vaccines.”

She complied, and immediately after getting the second injection, according to her husband, “she started to experience chest pain at work.”

Things went down hill fast after that, as the all-too-familiar symptoms of blood clots, a known side effect of the Pfizer COVID-19 shots, were found in her heart, and today she has had both legs amputated, and will also have to have both of her hands amputated.

Her case is supposedly “rare,” as her husband reports that after the CDC and “70-80” doctors investigated her case, and reported back to him:

the CDC sent us a letter of their conclusions which stated that Jummai was infected with MIS-A and covid-19, but they cannot conclude whether the covid-19 vaccine contributed for now.

Her entire story is published on their GoFundMe account, written by her husband, where they are trying to raise money for their medical expenses.

Having covered hundreds of deaths and crippling injuries following these COVID-19 shots now, I must admit that this one really hit me hard emotionally, especially seeing her photo.

I was immediately reminded of the verse in the Bible from Hosea 4:6 which states: “My people are destroyed from lack of knowledge.”

I also remembered what Dr. Sherri Tenpenny said in May of 2020 last year, more than 6 months before the COVID-19 “vaccines” were even authorized in an interview with Brian Rose, where she agreed with Dr. Judy Mikovits that up to 50 million people in the U.S. could die from these “vaccines,” but that some people will survive and wish they hadn’t.

“There are some things worse than death.” (Source.)

I am not saying that this is the case for Jummai Nache, as it appears she has a very strong community surrounding her that will help her through this, but when are people going to wake up and realize that the medical system and the medical political agencies that are supposed to “regulate” them are not looking out for our best interests, but only their own, and that to trust in them as a supposed “believer” is actually idolatry?

Some excerpts from her husband’s GoFundMe page:

This is the story about my wife Jummai.

She is a medical assistant who worked in one of the clinics in Minneapolis MN, where she was instructed to take the covid-19 vaccine.

After receiving her second Pfizer Covid-19 vaccine on February 1, 2021 she started to experience chest pain at work.

Three days after the chest pains I took her to Urgent Care on February 6, 2021. After the checkup, EKG and other tests, the doctor said there was nothing wrong with her chest and every test showed she was okay.

She took a covid-19 test and the next day was confirmed positive. Jummai and I were shocked when we received the result that she was covid-19 positive because she had not manifested any symptom before taking the shot.

But we later accepted that perhaps, the virus and the vaccine together contributed to the adverse reaction on her body based on the report of the Infectious Disease physician that Jummai was asymptomatic.

So Jummai followed the CDC guidelines but then a few days later she ended up at Fairview ER and then was transferred to U of M medical center.

The next day, 2/14/21 the doctor called and told me that her heart was deteriorating, her oxygen levels and blood pressure were low and she needed to be put on a ventilator. I gave approval for them to proceed with the ventilator as needed.

The Infectious Disease Dr considered the test results, Jummai’s condition, the timeline of the administered vaccine and the onset of covid 19, realizing the vaccine might have caused the adverse reaction.

But the Dr always concludes that this is just a theory which cannot be verified because they do not have testing equipment to clearly state that the vaccine has caused Jummai’s devastation.

Whatever the cause may be, my wife is suffering unbearable excruciating pain and permanent catastrophic damage. The consequences of the adverse event are as follows: 1. Arterial blood clot; 2. Respiratory distress—ventilator; 3. Cardiomyopathy; 4. Anemia; 5. Damage to fingers of both hands and toes of both feet; 6 Ischemia; 7. MIS-Multiple Inflammatory Syndrome.

As a result of the above complications, the Infectious Disease Dr decided to forward the case to CDC.

According to the Dr, after going back and forth with the CDC, they decided to meet to deliberate with many experts around the country in which about 70-80 doctors met on a virtual call to discuss Jummai’s case.

About 8 weeks after the meeting the CDC sent us a letter of their conclusions which stated that Jummai was infected with MIS-A and covid-19, but they cannot conclude whether the covid-19 vaccine contributed for now.

Since Jummai’s blood specimen which was taken at the onset of this nightmare is saved in the lab, we pray for God’s provision of a separate body of experts who could study Jummai’s very unique case to draw other conclusions.

As the CDC related, Jummai’s case is very unique. Since my request to be in that meeting was not granted, I submitted the following questions for the CDC experts’ response:

1. When her symptoms started, I was with her, eating and sleeping together, but I tested negative and did not have any symptoms. Why am I not positive?

2. If she got the vaccine before the virus or got them at the same time, did the clashing of the covid-19 and the vaccine cause such adverse reactions? Why didn’t the CDC or Pfizer let us know? Or why wouldn’t they ask everyone to be tested for covid-19 first, before taking the vaccine?

On one occasion, the doctor called and told me that Jummai could die at any moment, but God preserved my wife’s life in a miraculous way in response to all the prayers of the church.

Read the full article at GoFundMe.