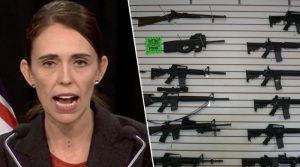 As New Zealand reels from Friday’s Christchurch mosque attack that left 50 dead and 50 wounded, Kiwis have started voluntarily surrendering their legally-owned semiautomatic firearms for destruction ahead of reforms promised over the next several days, according to New Zealand news outlet Stuff.

The reports of citizens disarming themselves come amid a Monday announcement by Prime minister Jacinda Ardern that several “in principle decisions” on gun control have been made by Cabinet ministers, and has praised residents who have surrendered their guns to police.

“Within 10 days of this horrific act of terrorism we will have announced reforms that I think will make New Zealanders safer,” said Ardern, who donned a headscarf this weekend while visiting stricken Muslim communities.

John Hart, who has been a sheep and beef farmer for 15 years, said he took his semi-automatic weapon into Masterton police station on Monday as he “couldn’t in all conscience” keep the rifle after seeing the loss of life in Christchurch. –Stuff

“Until today I was one of the New Zealanders who owned a semi-automatic rifle. On the farm they are a useful tool in some circumstances, but my convenience doesn’t outweigh the risk of misuse,” tweeted Hart.

“Since the events on Friday I had been thinking a lot about the firearms we have here on the farm… They [semi-automatic weapons] are not critical, not if the trade off is loss of life,” said Hart – who said he used his rifle for occasional pest control, but that he doesn’t need semi-automatic weapons on his farm.

While it can be useful “to have a second or third shot”, that is “a minor inconvenience” compared to using a safer bolt-action rifle for the same jobs, he added.

Official police figures show that nearly 7,000 New Zealanders are legally allowed to own semi-automatic weapons. Police have advised those who wish to turn theirs in first call their local police station or arms officer for advice on safely transporting them for destruction.

“Walking up the long courtyard to the Masterton police station, towards a stone-faced policewoman guarding the door holding an AR15 at the ready, while I’m carrying a rifle (in its case) was, let’s say, a puckering experience,” said Hart.

Another Twitter user, @SirWB, wrote that he has “reflected and reserved my thoughts,” before making “one of the easiest decisions I have ever made” to voluntarily disarm after owning a firearm for more than three decades.

Following the 1996 Port Arthur Massacre in which 35 people were killed, Australia banned guns via the National Firearms Agreement, which resulted in confiscation of between 650,000 and 1 million firearms from private citizens.

A 2007 study by researchers Jeanine Baker and Samara McPhedran found that “when compared with observed values, firearm suicide was the only parameter the [National Firearms Agreement] may have influenced, although societal factors could also have influenced observed changes.”

The following year, Wang-Sheng Lee and Sandy Suardi with the University of Melbourne concluded that “there is little evidence to suggest that [the National Firearms Agreement] had any significant effects on firearm homicides.” Additionally, “the evidence so far suggests that in the Australian context, the high expenditure incurred to fund the 1996 gun buyback has not translated into any tangible reductions in terms of firearm deaths.” -Newstalk1130

But in the wake of a mass shooting, apparently all it takes to stop a bad guy with a gun is a good guy (or gal) who’s given up their ability to defend themselves and their family.