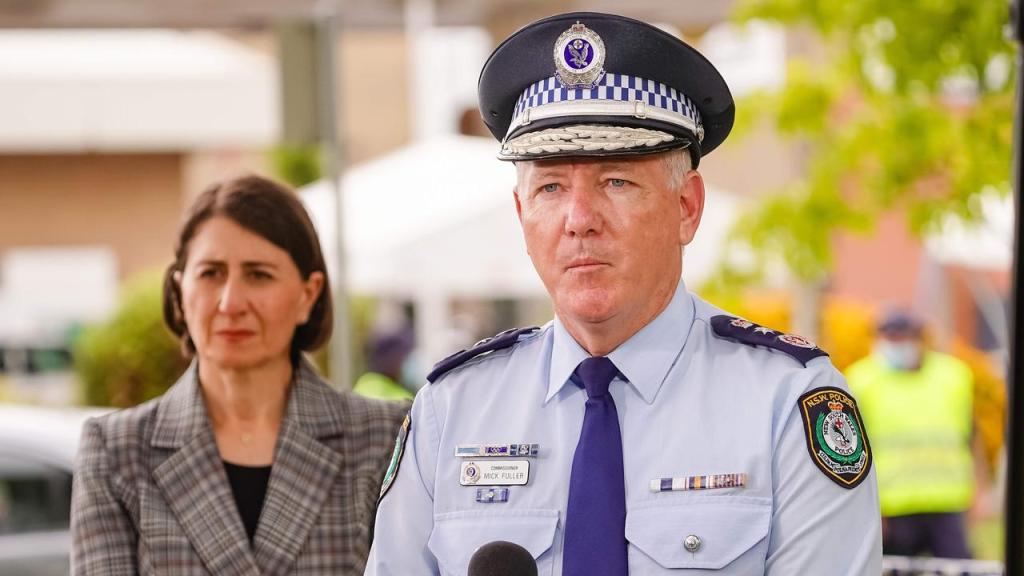 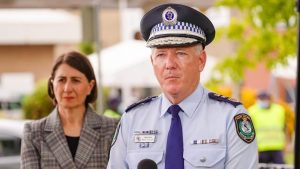 The head of NSW Police has admitted escalated enforcement operations are not directed by any public health order, but rather their own agenda to achieve greater compliance.

Mick Fuller recently told NSW Parliament that the force has committed to “treating the virus like a criminal”, encouraging officers to “put community policing to the side”.

IT’S ALL ABOUT COMPLIANCE: FULLER

Shocking displays of overhanded police tactics in Australia have become the laughing stock of the world in recent months, particularly in locked down New South Wales.

Now, in a bombshell admission, the head of the NSW police has admitted the increased tyrannical actions witnessed in recent months have been taken solely on the own accord of the force.

NSW Police Commissioner Mick Fuller was recently called before a NSW Parliament budget estimates hearingand was questioned over the response of his force to COVID-19.

During this sitting, Fuller said the decision to escalate police enforcement of COVID-19 restrictions was solely based on low levels of compliance in the community, as opposed to NSW Health orders:

The commissioner revealed to the Greens Leader David Shoebridge that police have committed to “treating the virus like a criminal” to support the pandemic response.

How this is achieved, however, rests solely with him as commissioner:

The Hon. Walt Secord also questioned the police commissioner, raising questions about the legitimacy of social distancing and other guidelines — which are not a provision of any orders.

Fuller confirms that these practices are merely ‘good health advice’, as opposed to directives, which have caused ‘understandable confusion’ in the community:

There you have it, ladies and gentlemen.

Since the very beginning of this pandemic saga, TOTT News has stated that this has never been about ‘health’ or ‘security’, rather, the entire martial law operation is designed for mass compliance.

The police are acting on their own accord — not as a result of public health orders — and believe the justification lies in the notion that greater enforcement will ‘stop the spread’.

However, this also stands on very shaky ground, as revealed by later comments from the hearing.

David then asks the Commissioner about what evidence he has to support the strategy that an increased police presence leads to a safer community:

“Is that your evidence?”

These bombshell comments by the head of the New South Wales police force prove that inhumane violation of human rights are all based on opinion, not evidence or directives.

‘Operation Stay at Home’ is nothing but psychological and economic warfare against free citizens.

Similar to Victorian Police enforcing curfew orders past a certain time with no basis whatsoever.

Who is questioning the decisions made by these officers?

How are they allowed to go rogue on their own?

What a state of affairs in New South Wales.

On closer examination, we see that these officers are not only enforcing orders on a false basis, but the commissioner himself has given them free reign to fine as they please with no consequences.

Not only has Fuller admitted that police are acting on their own accord, but he also brags to the committee about the levels of infringement notices they have handed out over the last few months.

When speaking on the success of dystopian compliance operations, Fuller revealed that police have issued about 18,000 fines over the past six weeks of enforcement of public health orders:

Nobody shall do anything that objects The Party in 2021 NSW.

Police are not only issuing stunning amounts of infringement notices to citizens for less-than-misdemeanour activities, but they do not even care if they are legal fines or not.

Last month, Fuller told his officers that he won’t hold them to account for wrongly issuing COVID-19 fines in a call to prioritise health order enforcement outside emergency duties.

Fuller, in fact, urged police members to put community policing aside during a blitz on breaches, issuing a challenge over the course of Operation Stay at Home to “go high-level enforcement”.

The commissioner directed officers to “put community policing to the side for a short period of time” and said they would not be held to account for issuing fines that turned out to be wrong.

“We need to stretch ourselves across the state, but we’ll only get compliance if you start writing tickets, if you start future CANing [issuing a future court attendance notice] people for breaching the health orders.”

This is the mentality driving unprecedented amounts of fines in locked down Sydney, and as we have now revealed, is not even based on any type of health order.

It is simply police going mad with their own power.

‘Look to the UK’, they vaguely say when asked to provide evidence.

Let’s not forget the health department also refused to provide any evidence for their measures.

They just jet off and leave after the damage has been done to the private sector.

FULLER IS RETIRING NEXT YEAR

NSW Police Commissioner Mick Fuller will retire next year after more than three decades in the police force, it was revealed in July of this year.

Right before the next wave of coronavirus lockdowns began to ramp up.

Is this just a ‘coincidence’?

The commissioner has been a regular character in Australia’s shift towards the new world order.

Fuller played a key role in the response to Sydney’s Lindt Cafe False Flag operation, which was the catalyst for Australia’s most significant increase of surveillance legislation in 2015.

During the time, he said extensive conversations with the family of Katrina Dawson, one of two ‘hostages killed during the attack’, would stay with him forever.

No surprise that he is front and center for the coronavirus tyranny Sydney is witnessing today.

In a radio interview in July, he flagged a likely shift into a private industry role.

Just like former NSW Premier Mike Baird, who ended up taking a job as a senior executive at the National Australia Bank a month after leaving politics.

They do not care for their actions, because they will not be around to see the consequences.

Individuals like Fuller carry out this agenda and sail off into the horizon.

Yet people continue to believe that charlatans like Fuller have your best interests at heart.

Give me a break.

The narrative continues to crumble around them, and hopefully the actions of Fuller and others can be exposed for their true intentions before they are able to leave these positions.

Recent court case commencements against public health orders are a step in the right direction.

In the meantime, those who refuse to be intimidated by unjustified police actions should not be treated as ‘domestic health threats’, rather applauded for calling these forces to account.

A tyranny that is now becoming clear with each passing day.

Examination of proposed expenditure for the portfolio area
PORTFOLIO COMMITTEE NO. 5 – LEGAL AFFAIRS

Melbourne curfew is not based on advice