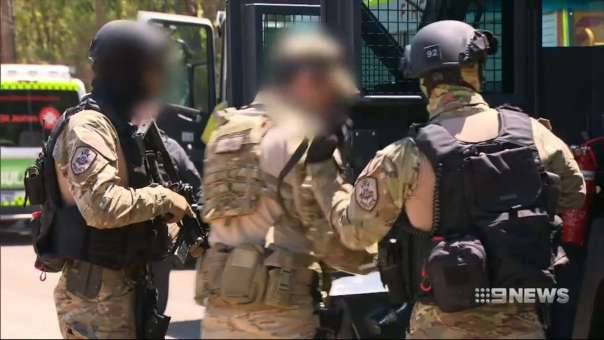 Perth SWAT police at it again, acting as debt collectors for the avaricious banks. This time one of the home owners,  Janice Croft, passed away in hospital. It has not yet been confirmed if she was hit by a ‘non-lethal’ bullet fired by police during a five hour siege. (what is a non-lethal bullet? Ed)

A woman who was yesterday involved in a five-hour siege at a Perth property has died in hospital.

Officers were called to a home on Douglas Road in Martin, in the city’s south-east, about 9am yesterday following reports a couple in a home made threats after the sheriff’s office came knocking to repossess their home.

Police fired a single non-lethal shot as the siege came to an end at about 2.30pm.

The home is owned by Rodney and Janice Croft, who were arrested by police.

Soon after, Mrs Croft was rushed to Royal Perth Hospital in cardiac arrest and in a critical condition. Her husband remains under police guard in hospital.

It’s not clear when she suffered the cardiac arrest or if she was hit by the non-lethal police round.

Mr Croft was the former Deputy Mayor of Gosnells but in recent years the couple had battled long running and costly legal troubles.

It is understood they owed close to a million dollars.

No charges have yet been laid. (Against the police? Ed)