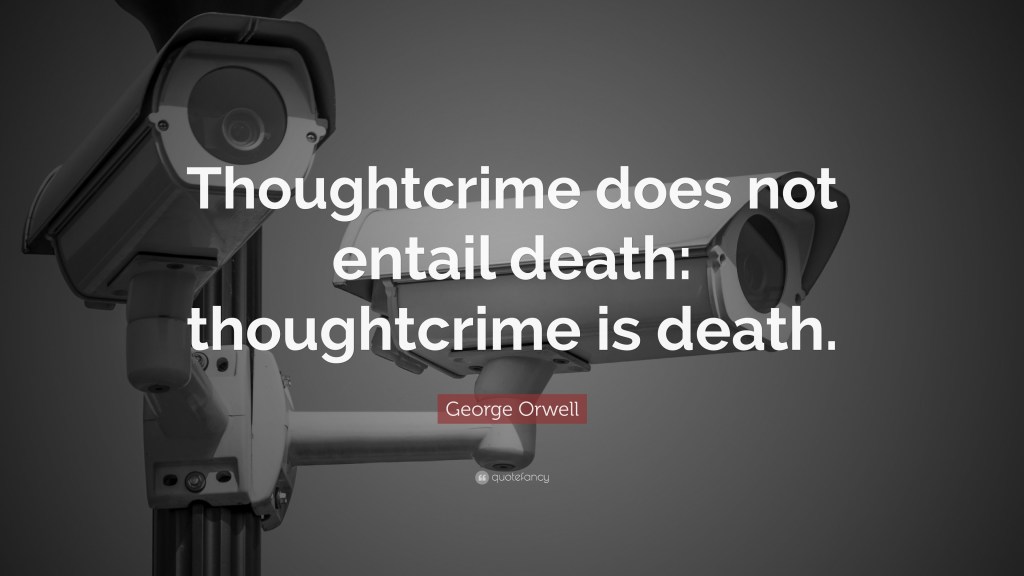 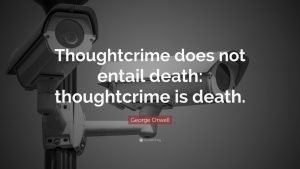 Coupled with increased social engineering tactics, including appeals to ‘herd immunity’ during restrictions, foundations are being built for an approaching era of COVID-19 “thoughtcrime”.

Pssst. You. Yes, you, reader. Are you interested in talking about, things? You know, the kind of things that we’re not allowed to talk about anymore? You know, since, uhhh, ‘The Event’?

You are? Great. I mean, you might have noticed things are getting a bit hairy out there. As in, you’re likely to get your head bitten off for daring to suggest things may not be okay with the “new normal”.

In George Orwell’s Nineteen Eighty-Four, it was the state that determined what constituted acceptable speech in keeping society orderly. In 2020, a small cadre of companies in Silicon Valley are now wielding absolute power over what we are permitted to see and say online.

Even before the coronavirus arrived to turn life upside down, social media platforms were under growing pressure to curb the spread of ‘misinformation’. Today, with COVID-19 reaching unprecedented heights, the event has triggered what is now described as an ‘infodemic’.

RELATED:
Big Brother is here,
and his name is Facebook

Facebook has been allowing national ministries of health and ‘reliable organisations’ to advertise ‘accurate information’ on COVID-19 free of charge. Twitter, which prohibits political advertising, is allowing links to the Australian Department of Health and World Health Organization websites.

We have seen YouTube announce restrictions on all conspiracy theory videos linking to alternative coronavirus material, and Twitter has announced a suite of changes to its rules, including updates to how it defines harm. This is to address content that goes against public health information.

In more recent developments, Facebook is now taking down some event pages promoting anti-stay-at-home protests that are taking place across the US.

Facebook faced criticism for allowing people to coordinate anti-quarantine protests, with public health officials, state officials and health care workers saying the protests are ‘putting people’s lives at risk’. By bringing people together in large crowds, they ‘increase the chances of spread’.

Like Orwell’s dystopian novel, the monopoly of social media conglomerates controlling the flow of information today are a similar war machine that is attempting to censor every printed word.

You must obey, or suffer the consequences of the Party.

In recent years, anti-establishment dissent has been increasingly portrayed as a new-age act of ‘terrorism’ in the eyes of authorities. ‘Hate speech’ and other socially engineered dogmas have broadened to the point that anyone who questions any official narrative is an enemy of the people.

Today, social media companies deploy vast armies of human and algorithmic moderators that surveil their users 24/7, flagging those that violate ‘dangerous content’ guidelines. They are also assisting in the mass surveillance systems being established to track-and-trace COVID-19 movements.

Orwell fictionalizes about a repressive state called Oceania, in which citizens are punished for a variety of crimes, including those you do, and even those that you only think about.

He calls the harshest of these “thoughtcrime” — the crime of simply thinking something that is disallowed by Big Brother. This control structure is constantly monitoring citizens and their actions.

Those that commit too many of these crimes are banished to “unperson” status without any intervention or even the right to an appeal. Does this all sound familiar to you?

Much like the novel, during the COVID-19 saga, free expression and open debate is being replaced by a technocratic system of censorship, where anyone who disagrees or thinks independently is guilty of a thoughtcrime and punished by being silenced.

Orwell’s commentary on the surveillance state has come true. The only difference is that Orwell saw surveillance and control as only the domain of the state, whereas in reality, the world we have come to know is one that also includes a network of private companies mining the details of our lives.

COVID-19 perfectly illustrates Orwell’s observation, based on his knowledge and experience of communism and fascism, that “if thought corrupts language, language can also corrupt thought”.

“We are all in this together”. “#StayHome”. The language is designed to set the ‘accepted’ viewpoint that always must align with the needs of the Party. Once enforced, any dissent is toppled online.

The real question is: As things continue to progress, what do you think the public will end up doing to those voicing opinions they disagree with? Engage in dialogue with us? Or demand that agents of the ‘invisible enemy’ are ‘unpersoned’ from the internet and locked in a cage for their ‘thoughtcrime’?

Many readers will already know the answer to this, and the building blocks are developing.

STAGE IS BEING SET

Not only are social media conglomerates beginning to censor and remove selected COVID-19 content, but the blueprint is being developed to launch public backlash to further heights.

We have met the enemy — and it is our neighbours. People imagine that when the boots-on-the-ground tyranny arrives, it will be enforced by the police or the military.

Newsflash: the boots-on-the-ground are here, but it is not the final step of the plan. Next, the restrictions imposed on society be will enforced by your neighbours, Joe Sixpack and Jane Soccermom.

Need proof? How about all the new ‘snitch lines’ that are opening up in city after city and state after state all across the world to help good citizens tattle on neighbours who aren’t practising proper social distancing. We have already seen tens of thousands of calls made in Australia.

That’s right, whenever you see someone within two meters of someone else, it is your duty as a loyal citizen of the Brave New World Order to actively report them to the authorities so that they can be dealt with by Big Brother.

Rest assured, score cards are being compiled overseas and may soon reach Australia, just to ensure authorities keep a list of who has being naughty or nice.

Another important building block in this ongoing social experiment is the fact doctors are being promoted as the new soldiers. When 9/11 happened, there was a marked and notable intensification in the propaganda glorifying the Australian military.

Not that such propaganda didn’t exist before, but it was nothing like what we have seen since ‘the day that changed everything’. Yes, the hero worship of veterans is one of the hallmarks of the Age of Terror that 9/11 ushered in. Thus, if the current plandemic is the new 9/11, what represents the new hero worship?

Well, it should be obvious by now: Doctors are the new ‘soldiers’ of this event and Australians are completely unaware. Already, we must dutifully show our appreciation for the brave medical workers on the front lines of this new ‘war’ — or face yet more social castigation.

This socially engineered adoration is going to be used to push an agenda exactly like the glorification of veterans was used to push the militarism agenda of the post-9/11 years.

This time, we are being asked to glorify doctors and nurses, because these are the same trusted experts whose authority cannot be questioned. Remember, these heroes are the ones ‘risking their lives’ and the ones who will eventually give you the ‘life-saving’ COVID-19 vaccine.

You know, the same vaccine being pushed by known eugenicists. The one that will supposedly bring an end to the long psychological siege that we are placed under.

What?? You still question the vaccines? You still dare to defy the authority of these brave doctors and nurses who risked their lives for us? You can’t say that, you conspiracy-mongering thoughtcriminal!

In the end, it seems the new ‘social norms’ and cultural taboos that have arisen in the past few weeks have also created a raft of new thoughtcrimes. These are things that must not be spoken about for fear of being expelled from our new society. In the future, this could end up being much worse.

That is why it is so vitally important for us to link together and continue to speak out about ongoing concerns, before these socially-policed thoughtcrimes become literal crimes. If this is not confronted, voicing dissent may soon become much more difficult.

The only thing we can be sure of is that the room to express dissent on these topics is fast disappearing. It’s time for those of us who can tolerate thoughtcrime to circle the wagons.

The Thought Police are closing in, Australia.