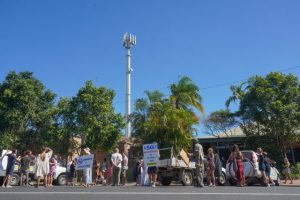 READ MORE AT THE ECHO A group of locals have temporarily halted construction of a 5G installation in Mullumbimby this morning, and are calling for reinforcements to help maintain their action throughout the day.

Telstra workers arrived at the site of the proposed installation behind the Mullumbimby Post Office to begin work at around 8.30am. Protesters at the site of a 5G installation in Mullumbimby. Image: Paul Bibby

This was despite hundreds of local residents and Byron Shire Council opposing the project.

Around a dozen locals blocked access to the site of the installation, refusing to let the workers access the site, which lies less than 50m from the main Mullumbimby bus stop.

Work has temporarily halted at the site of the proposed tower.

‘The community has decided collectively that we don’t want 5G it was put forward that it wouldn’t go ahead,’ one of the protestors, Lorin Ripley said.

‘Now, just a week or so later they’re here going ahead with construction.’

‘It’s not proven to be safe and we don’t want to be living in an unsafe environment. It feels like people are going against our rights and taking actions to control us and create a world that we don’t have a say in and that’s really unfair.’

Byron Shire Council has formally opposed the proposed installation at Mullumbimby on the grounds that Telstra has not provided answers to its questions about the safety of the technology and other potential issues.

However, Telstra does not need Council permission to build the installation.

Under the Federal Telecommunications Act, certain 5G infrastructure can be build without approval from any government authority.

The protestors are calling for other locals concerned about 5G to join them at the Mullumbimby site as soon as possible.

‘The Telstra man who came down said we could ask him any questions we wanted to, and then when we did he said ‘no comment’ to every one of them,’ Ms Ripley said.