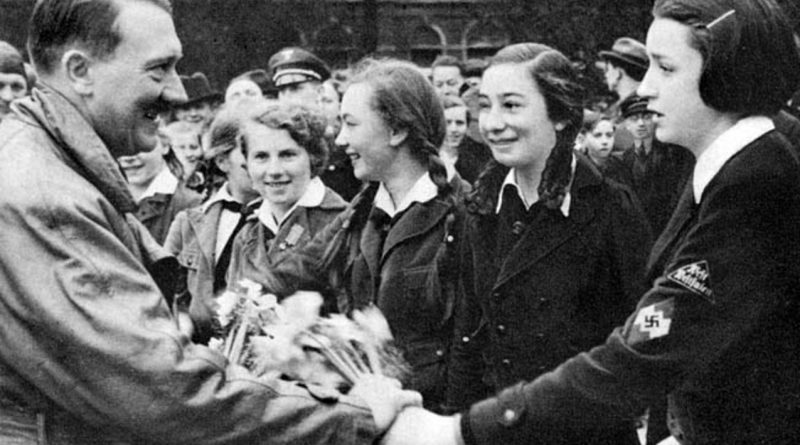 Background: The National Socialist Party’s Central Propaganda Office, the Reichspropagandaleitung, published a monthly bulletin for speakers through until 1944. It was designed to be kept in notebooks, divided by subject area. This particular material was issued in installments to speakers from August through December 1935, beginning just before the proclamation of the Nuremberg Laws. I’ve translated most of this because it is the material on which thousands of National Socialist speeches were based on, less visible than material published in the press, but rightfully spread by speakers to every corner of the country. It also is a good summary of what NS Germany were saying publicly about the jews in late 1935. It also shows how jews are being treated with remarkable gentleness and patience.

The jew as Destroyer of Our Blood

A medical congress was held at the end of 1934 in Fürth, Bavaria. At its conclusion, a resolution to the Reich Minister of the Interior was approved that called for the strictest penalties for any attempted or actual physical union between a jewish descendant and a German woman. The newspaper Germania, in its issue Nr. 337 of 6 December 1934, reported on this decision, and felt it necessary to give it the headline: “A Strange Decision.” From this headline, as well as from the comments the paper had on the matter, it is absolutely clear that even today there are those who have still not recognized what is at stake, of who do not want to recognize it, even in those places where one would assume a deeper understanding of this question and of the goals of National Socialist racial policy. The newspaper believed it could oppose the resolution because it did not concern a measure “to hinder the increase of jewish influence on leading branches of public and governmental life.”

It is unfortunate, and requires immediate attention, when people’s comrades who have not yet understood National Socialist racial teachings and the goals of the National Socialist State in this area say such things, but it is in no way as important as when a newspaper presents such a view. One should expect that it would be familiar with the goals of today’s state. It shows the kind of thinking that still prevails today in some circles.

National Socialist racial thinking clearly demands keeping our blood free from the destructive influences of the carriers of racially foreign blood. Anyone with even a superficial understanding of these things knows that eliminating jews from public and governmental offices in no way met the demand to keep the blood pure.

The fourteen years of the November state, and numerous jewish statements, make it clear that the jew knows that taking possession of a people, and achieving jewish dominance, only occurred in the past, and can only occur, when he succeeded not only in filling the leading positions of a people, but also in subverting the thinking and the blood of a people.

During the November Republic, which almost brought Germany under the dictatorship of the jewish element, the jew not only took over positions in the government and other areas, but also worked consciously to subvert thinking through film, theatre, and the press, being particularly concerned to conceal, and to eliminate, the racial differences between himself and the German people, in order to subvert our people even more.

Perhaps it would interest the people who think like the Germania, that this was a “strange” decision to know what really clear jewish literature has to say. Here is an example:

“We have corrupted the blood of all the races of Europe — perhaps we have infected them. Today, everything is jewdified. Our thinking is in everything living, our spirit rules the world. We are the masters, for everything that has power today is the child of our spirit. One may hate us, one may drive us away. Our enemies may triumph over our physical weakness. But we are no longer to be gotten rid of. We have devoured the peoples, conquered the races, defiled them, broken their strength, made everything rotten, lazy, and corrupt with our stale culture. Our spirit can no longer be exterminated.”

“We have corrupted their blood,” that is the important thing. The jew knows that he can never gain power over a racially healthy and clean people, and that even if he succeeded in gaining a foothold, it would not last. He knows that, and therefore works to corrupt the blood, for a bastardized people will never be able to put up any kind of resistance to him and his goals, and even if it wanted to, it would not be able to, since its strength would be broken because it had become rotten and corrupt.

By the way, people like the journalists at Germania seem to think it entirely reasonable that thousands and tens of thousands of German girls are ruined both in body and soul each year by jewish lads, thus slowly but surely poisoning or destroying the blood of a people. We seldom, or even ever, see the jew treating his own girls in this way. They are too valuable. He marries them to maintain his race.

For his “outside affairs,” however, our German girls are just what he is looking for. For decades, offices watched this go on, and did nothing about it. In the last fourteen years, the jew was able to carry on unhindered in this area. That time is past. The German woman and the German girl are the guarantee of the future of our people, and we will be sure that they are kept pure for their people, that they will not become a prey of the jew, as they were in the past.

One thought on “The jew as Destroyer of Our Blood”