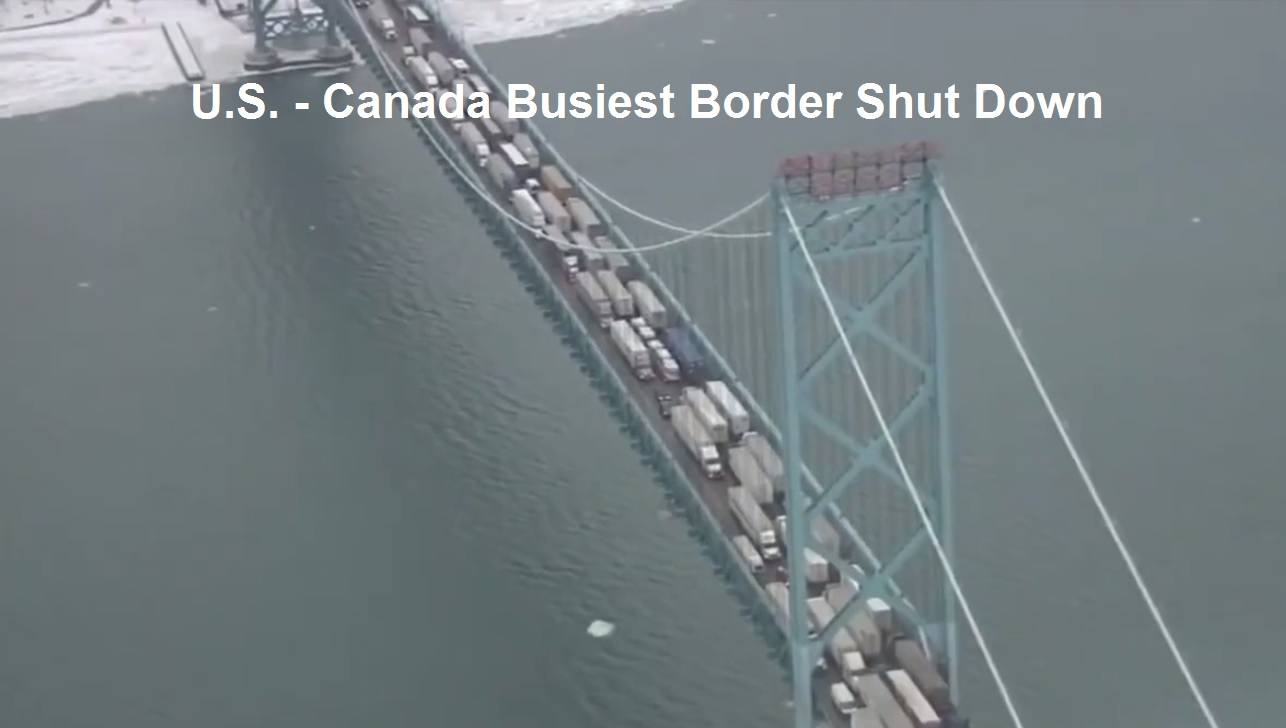 The Canadian Trucker Freedom Convoy entered its 11th day today, as two border crossings from Canada to the U.S. were closed down by protesters.

Rebel News is reporting that the Alberta – Montana border at Coutts has been closed again, this time by farmers.

The border crossing in Alberta was not the only border closed down overnight, however, as the bridge between Windsor and Detroit was also blocked and shut down.

The Ambassador Bridge that connects Windsor, Ontario to Detroit, Michigan has been completely blockaded by a convoy of trucks protesting the COVID-19 vaccine mandates, which remains ongoing in Canada’s capital city of Ottawa.

Efforts by the Freedom Convoy further in the north spilled over to the border crossing, the largest international suspension bridge and a major transportation artery between the United States and Canada as protesters blocked traffic on Monday evening.

Speaking to the Detroit Free Press, Gregg Ward, the president of Detroit-Windsor Truck Ferry said that the bridge closing is unprecedented and that the last time the bridge closed for a protest was in 1990.

Meanwhile, back in Alberta, Pastor Artur Pawlowski was arrested, again, as he tried to join the protesters in Coutts. Rebel News is reporting that he was arrested by an undercover SWAT team that had staked out his home in Calgary.

In Saskatchewan, Premier Scott Moe announced today that all proof of vaccine mandates in Saskatchewan will end this coming Sunday.

He did not reference the Truckers Convoy, but instead used the excuse that the COVID-19 vaccines were “not effective” in stopping transmission of the current variant, Omicron, and that therefore the mandates are no longer needed.

Since he erroneously stated that the vaccines were effective for past variants of COVID-19, he obviously left the door open to issue mandates again in the future, and of course never mentioned just how deadly these shots are, especially for children. In fact, his Chief Medical Health Officer, Dr. Saqib Shahab, followed his remarks by encouraging children to get one of the deadly shots.

However, Premier Scott Moe said it was “time to heal” and time for people in Saskatchewan to come together and stop judging their neighbors and others in their community for having differences of opinion on the wearing of masks and getting vaccines.

We extracted his 7 and a half minute announcement and it is on our Bitchute channel, and also on our Telegram channel.

Will this announcement now pave the way for the rest of the Canadian Government to end vaccine mandates while still “saving face” and not referencing the Trucker Convoy protests?