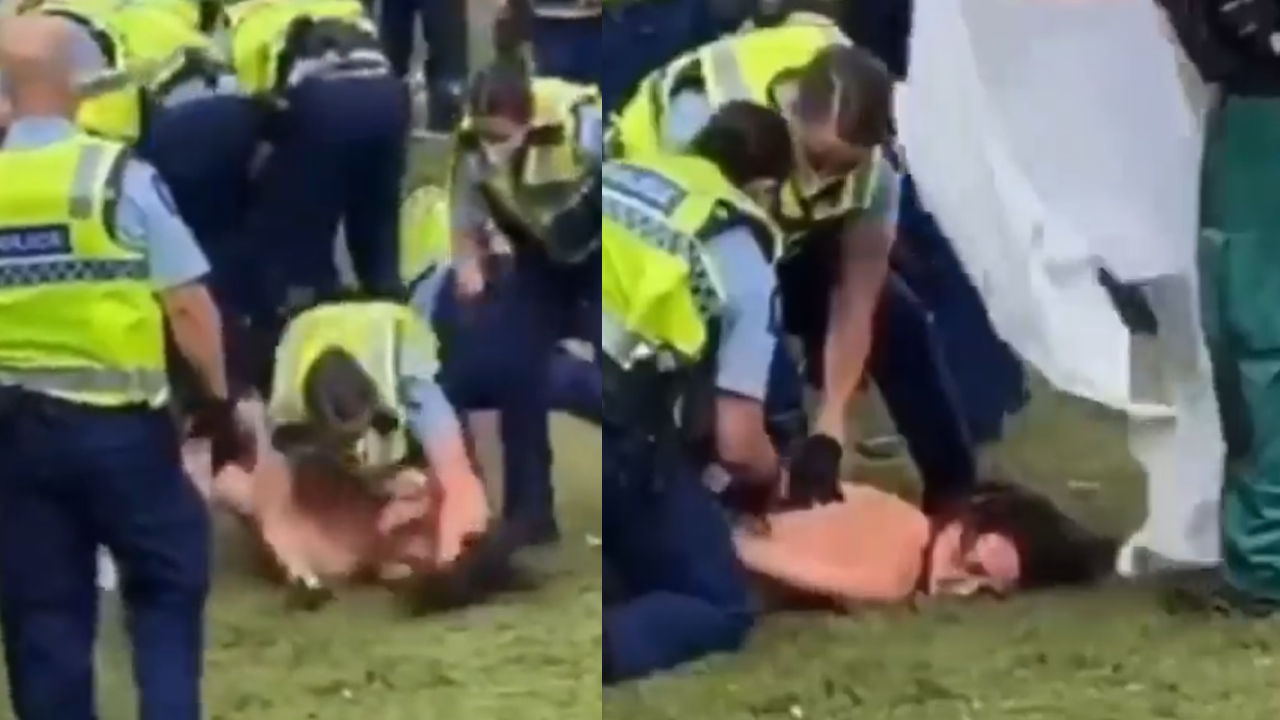 A nude woman was dragged away from the crowd after she attempted to make her way through a line of police officers who pinned her to the ground, one of whom appeared to plant his knee on the back of her head as two other officers placed her in restraints.

A nude woman was dragged away from the crowd after she attempted to make her way through a line of police officers who pinned her to the ground, one of whom appeared to plant his knee on the back of her head as two other officers placed her in restraints.

As reported by the Daily Mail, hundreds of trucks, cars and motorcycles carrying thousands of people from across the country converged upon the nation’s capital of Wellington on Tuesday morning, inspired by the Freedom Convoy protests in Canada.

Many protesters in Wellington say they oppose mask mandates and have called for their freedoms to return. Many carried Canadian flags in solidarity with the Freedom Convoy in Ottawa and elsewhere in Canada.

Per the publication and local news sources, traffic was brought to a crawl as vehicles blocked roads around the parliament buildings and other locations around the city, with thousands of protesters demanding a return of pre-pandemic freedoms.

Hundreds of protesters gathered in front of parliament to hear speakers and shout slogans denouncing Ardern, some of whom pitched tents around the area vowing to stay until their freedoms were returned.

Police erected a barricade between the demonstrators and parliament buildings, where violent clashes broke out between police officers and some of the protest groups in scenes captured and shared on social media.

“Police have appealed repeatedly to protesters to leave the grounds and have begun evicting people from the precinct,” said Superintendent Corrie Parnell, the Wellington district commander. “While police acknowledge people’s right to protest, this needs to be conducted in a way that does not unfairly impact on the wider public.”

Speaking to the Morning Report, Ardern says she had no intention of engaging with the protesters at parliament, Newshub reported. Lockdowns, which remain in place, meant people sacrificed some of their usual rights and abilities to keep others safe, she said.

Police, who were unarmed, engaged in hand-to-hand combat with the protesters and arrested more than 120 people during the melee, charging many of them with trespassing and obstruction by the evening.

New Zealand has mandated vaccines for certain professions, including police, doctors and soldiers, and has instituted a vaccine passport system that restricts unvaccinated or not-fully-vaccinated individuals from entering a large swath of public locations.

Vaccine passports are currently required for entry to restaurants, sporting events, and even religious gatherings.