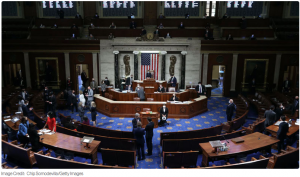 Update (1635ET): The House now has voted to impeach President Trump for allegedly inciting last week’s riot in the Capitol by a margin of 232-197.

President Trump is now the first president to be impeached twice.

Is that a smile under Pelosi’s mask?

Update (1545ET): After several hours of bloviating, the House is finally voting to impeach President Trump.

Update (1357ET): The following GOP lawmakers have announced that they will vote for Trump’s impeachment:

House Democrats are leading the charge on a Wednesday vote to impeach President Trump on one count of incitement of insurrection, after protesters were allowed into the US Capitol building last week through an open door – calmly walking inside before proceeding to take selfies and ransack lawmakers’ offices.

The article of impeachment accuses Trump of “willfully inciting violence against the government of the United States” in violation of his oath and duty. Once it passes, which we expect it will, Trump will be the first US president in history to be impeached twice.

Floor debate began shortly after 9 a.m. ET, while a vote is expected mid-to-late afternoon, according to House Rules Chairman Jim McGovern. Members will vote in staged groups on the House floor due to coronavirus, while some will vote by proxy.

On Tuesday, House Majority Leader Steny Hoyer said that the impeachment article would be sent to the Senate quickly, which would then hold a trial – as opposed to holding onto it for up to 100 days in order to give the Biden administration time to get to work without impeachment theater upstaging their agenda.

“The timing was thrust upon us by the actions of the president of the United States. The fact that he is leaving should not divert us from holding accountable behavior which many of us believe is treasonous behavior and criminal behavior,” Hoyer told MSNBC.

The timing could complicate Biden’s efforts to get cabinet officials approved by the Senate since lawmakers would be occupied by an impeachment trial.

But Senate Minority Leader Chuck Schumer has raised the possibility of invoking a 2004 emergency session law to convene a trial this week, although such a move would require the consent of Majority Leader Mitch McConnell.

Regardless of whether he is convicted in the Senate, a second impeachment would further stain a presidency that has culminated in a frightening assault on the storied center of the American democracy. It also opened fissures in the Republican Party that portends a power struggle over its future.

The New York Times reported that McConnell has told associates he is privately pleased with the impeachment, calculating that it will make it easier to purge the party of Trump’s influence.

Numerous Republicans, however, argued that impeaching Trump would only worsen divisions in the country.

Representative Nancy Mace of South Carolina, who was elected in November, said impeachment “throws gasoline on the fire.”

“Both parties need to take a time out and take a deep breath” Mace told reporters at the Capitol. “We need to have a peaceful transition of power and start over.”

Mace was not among the 138 Republicans who voted on Jan. 6 to reject Biden’s Electoral College win in at least one state even after the mob seeking to overturn the election had stormed the building. Many of them also made pleas for unity.

Owen is joined by crew member Sam, who has gathered new information on the agitators wreaking havoc in the capitol.